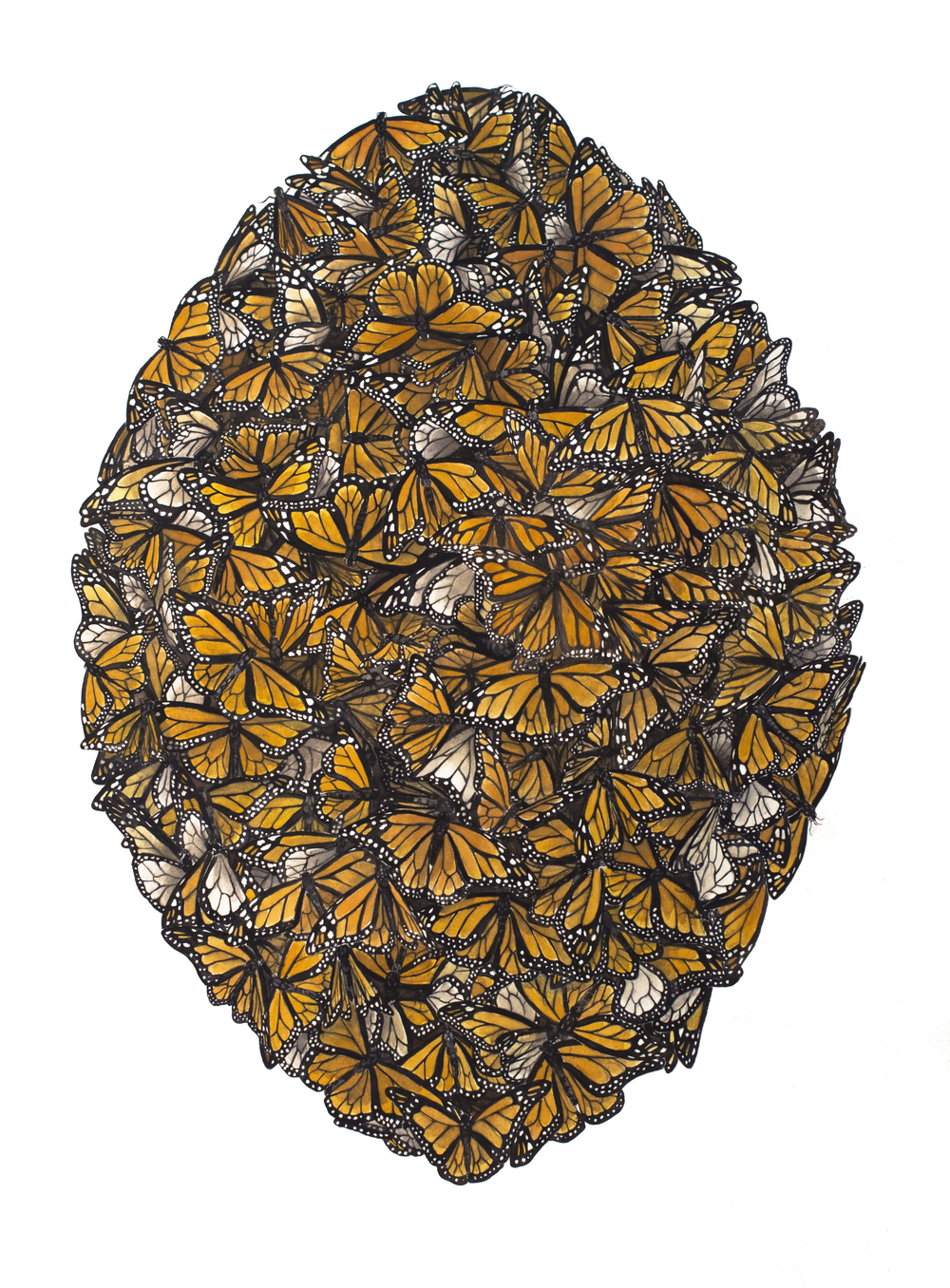 Maddison Colvin is an innovative artist currently a Visiting Assistant Professor at BYU. She holds degrees from Whitworth University and BYU. Her collection Swarms is engaging and contemplative. She writes, “In Swarms I paint or film masses of organisms behaving as a single group, exhibiting behaviors outside the ability of the individual organism- effectively erasing the individual and placing it within a network of incommunicable collective knowledge.” 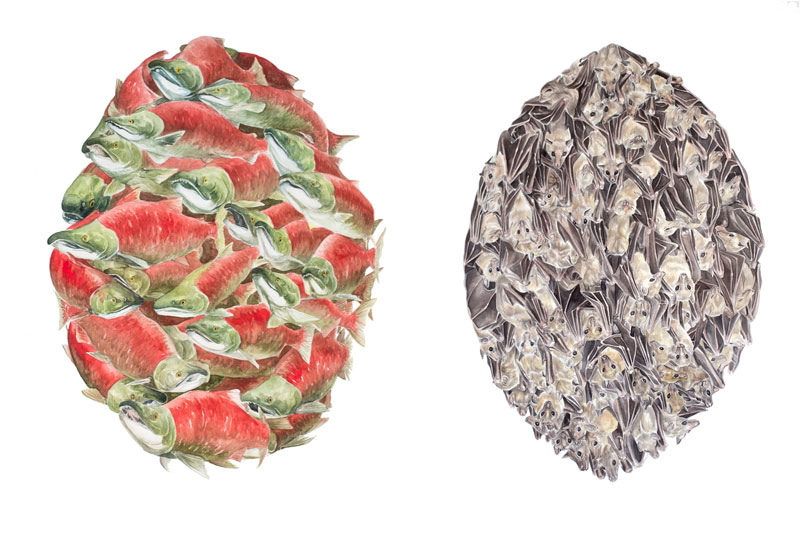 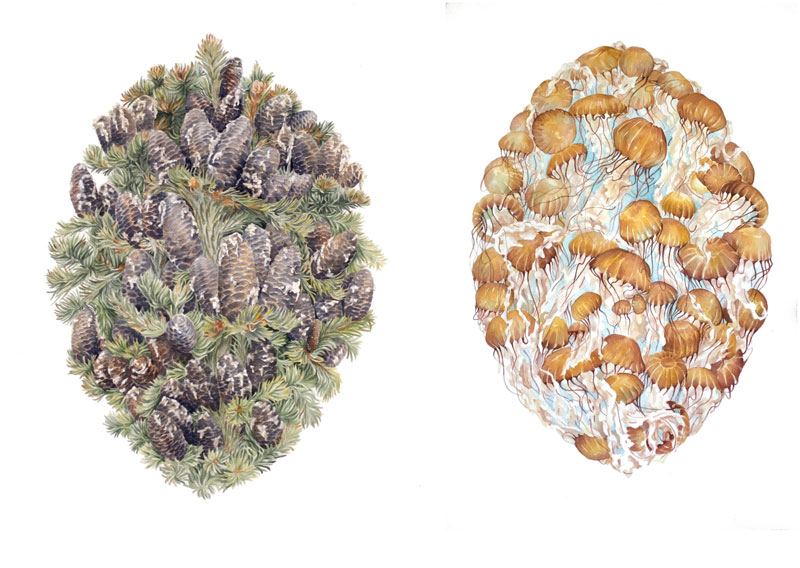 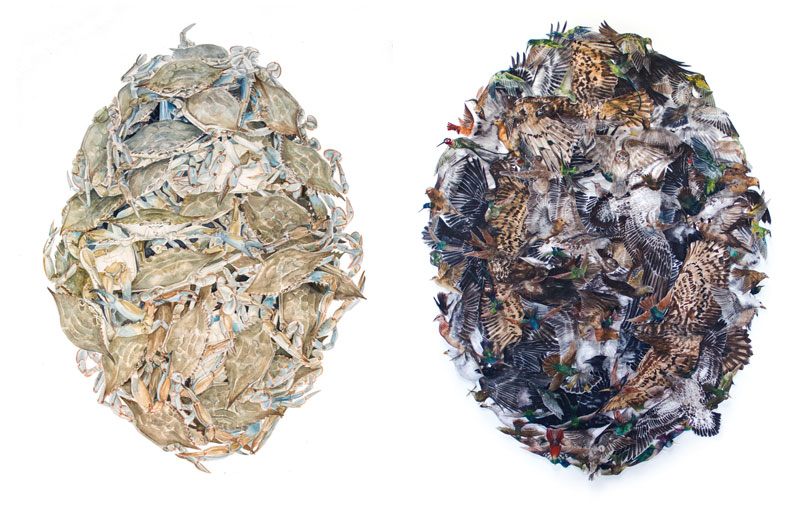 You have said Swarms examines ‘masses of organisms behaving as a single group’. What have you learned from this project? This was an unusual project for me. Usually, the work is a process of learning, and ends up as an artifact of that arc. The first swarm I made was very much in this vein- I painted birds onto vellum, cut them out carefully, and re-assembled them in a semi-sculptural form. Over the course of that piece, I became more and more interested in emergent behaviors, and did a lot of research about this particular kind of intelligence. However, because I kept making the swarms for over a year and a half, they ended up being more of a formal project- how do these bodies fit together, how do they form a unified whole, how do these unified wholes differ from each other visually/materially – rather than a conceptual one. In other words, the idea was finished at the beginning. I’ve really loved making these pieces but I don’t want to exhaust the concept any more than I have. Fortunately, the thinking of the project has branched off in a couple of directions.

First, a really valuable idea coming out of the swarms project is that of individual identity being subsumed or obliterated by communal behavior. I’m researching utopias a little, and specifically thinking about utopian communities being necessarily universal. The structure of a utopia usually diminishes the needs of the individual in favor of the needs of the whole, and requires the individual to behave as a functional unit in that whole. There’s something hugely appealing in that, and something very alarming. I see this conflict within a lot of people’s lived experience of the LDS church, and I’m going at it from that angle. What about faith requires the faithful to lose themselves somewhat to find a community? Does sameness produce unity and harmony or does sameness erase the self? I think a little of both and I kind of enjoy that tension. So I guess in retrospect, the swarm pieces taught me something about religious communities and how they function.

Secondly, I found the swarms to be sort of distant, like you can sit back and look at these obloid objects depicted on a surface.  I wanted the organisms to feel more immediate, personal, and intimidating. One solution has been some oil paintings depicting thick vegetation. I wanted them to feel kind of consumptive, to fill the frame of the painting and feel a little more intrusive. I also made two video pieces of worms and roaches respectively, filmed from beneath through plexiglass so they fill the frame. I might be getting somewhere with this, but I need to beat it into the ground for a little longer first.

How did you get started in art? I was an army kid- both my parents were GMO’s – so I grew up moving around the country. Because we moved so frequently, my parents choose to homeschool all their kids. My time was largely my own after I got all my homework done, and I would often get up at 5 or 6 in the morning just so I could be done with everything by noon. Then I’d spend the rest of the day reading and drawing. Drawing was a huge challenge for me and I was into it in the way a lot of kids were, getting obsessed with horses, bugs, dinosaurs, whatever. I eventually did dual-enrollment high school at a community college (SFCC in Spokane) and they had a great art program that really sucked me in. I spent a lot of time exploring and experimenting in undergrad (Whitworth), which resulted in some seriously cringe-inducing art that my parents love to hang in prominent places in their house. It probably wasn’t until my second year of grad school (BYU) that I felt competent decisions were evident in my art making. 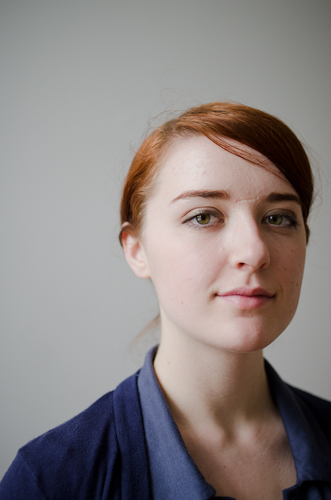