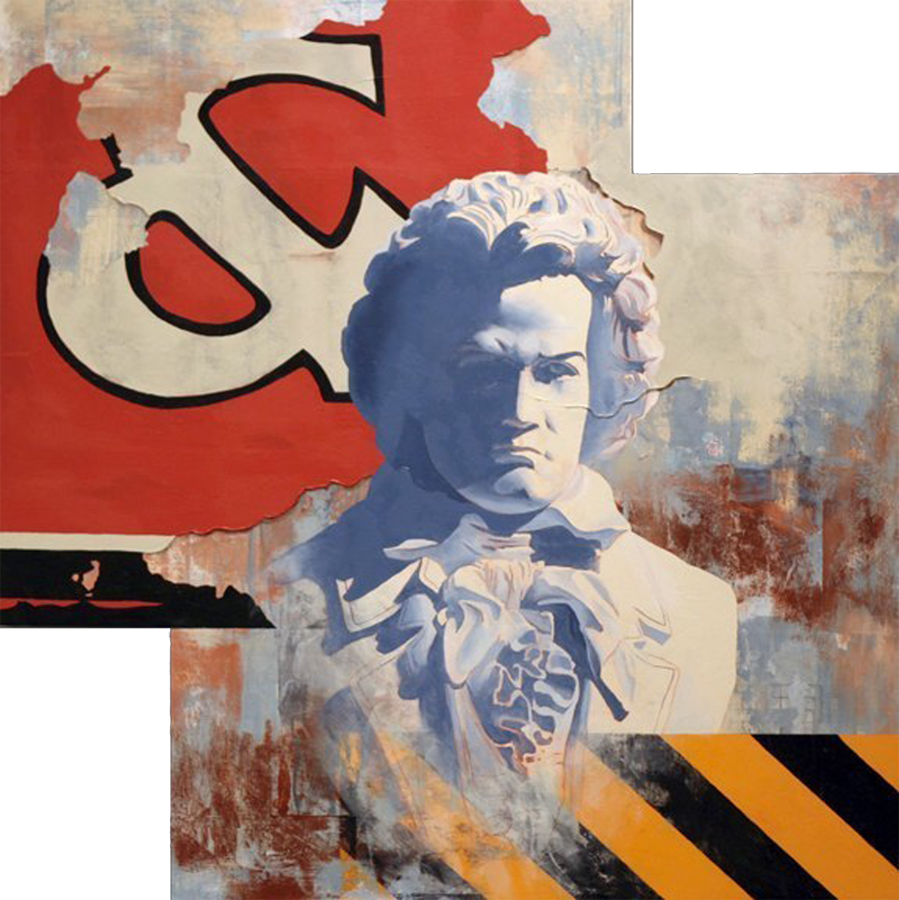 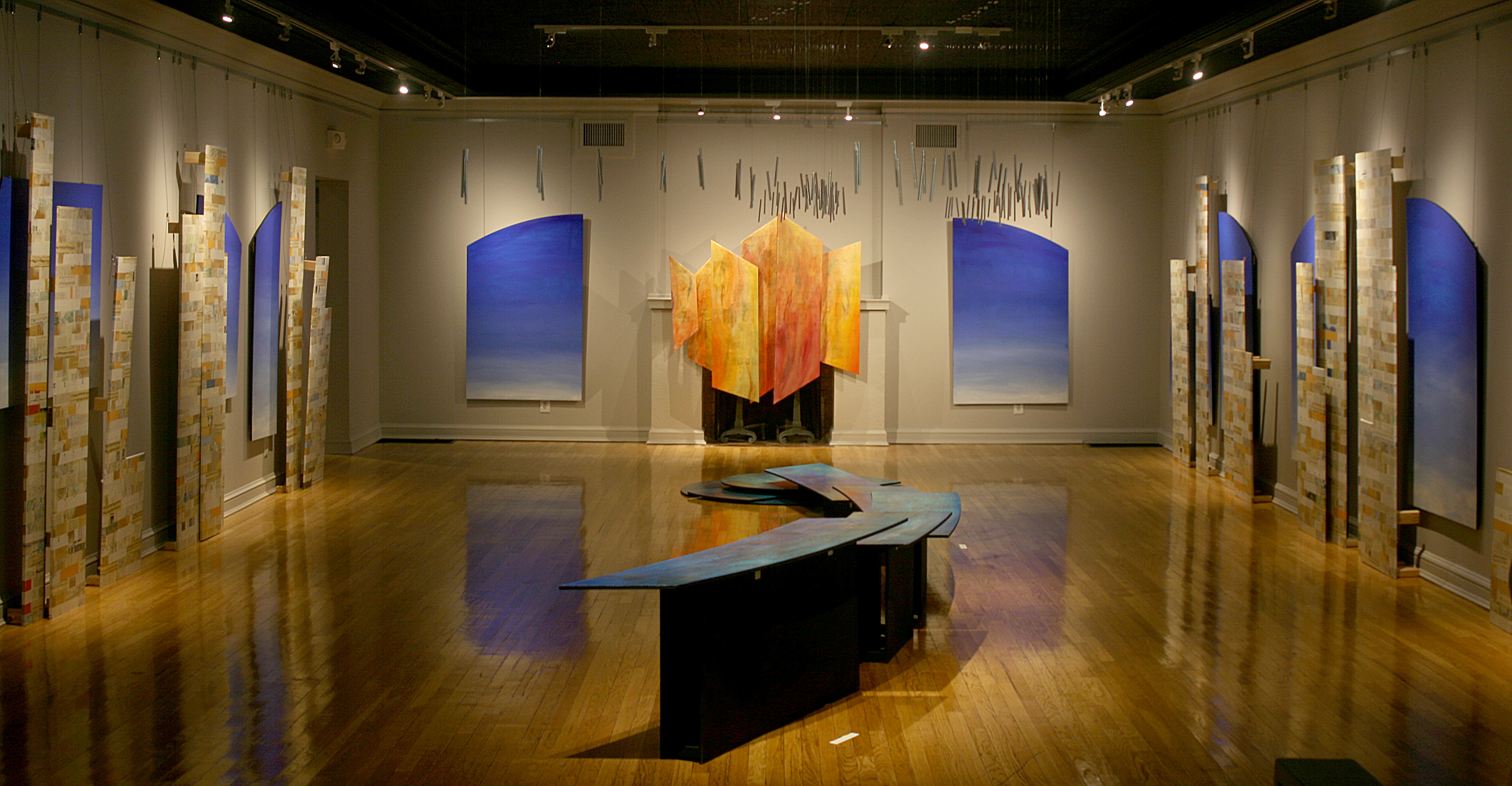 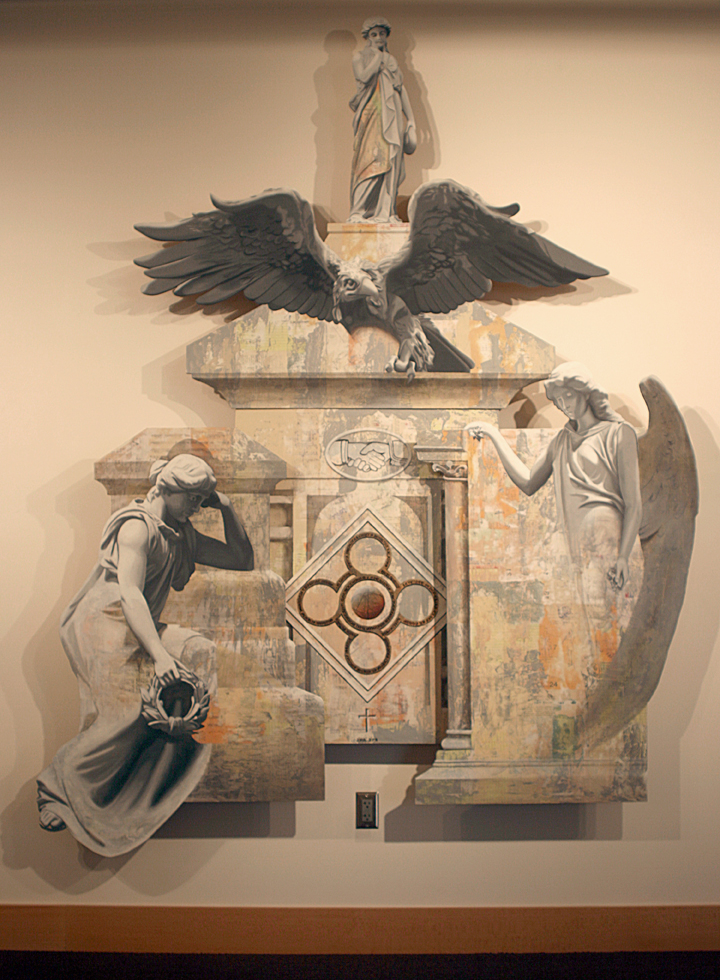 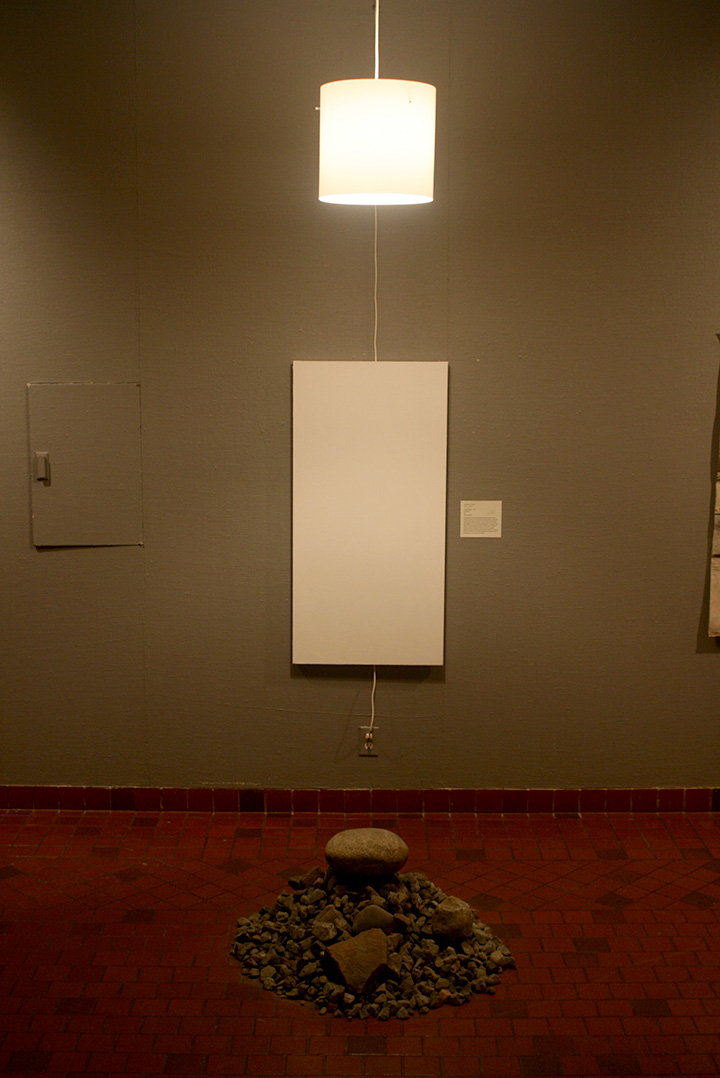 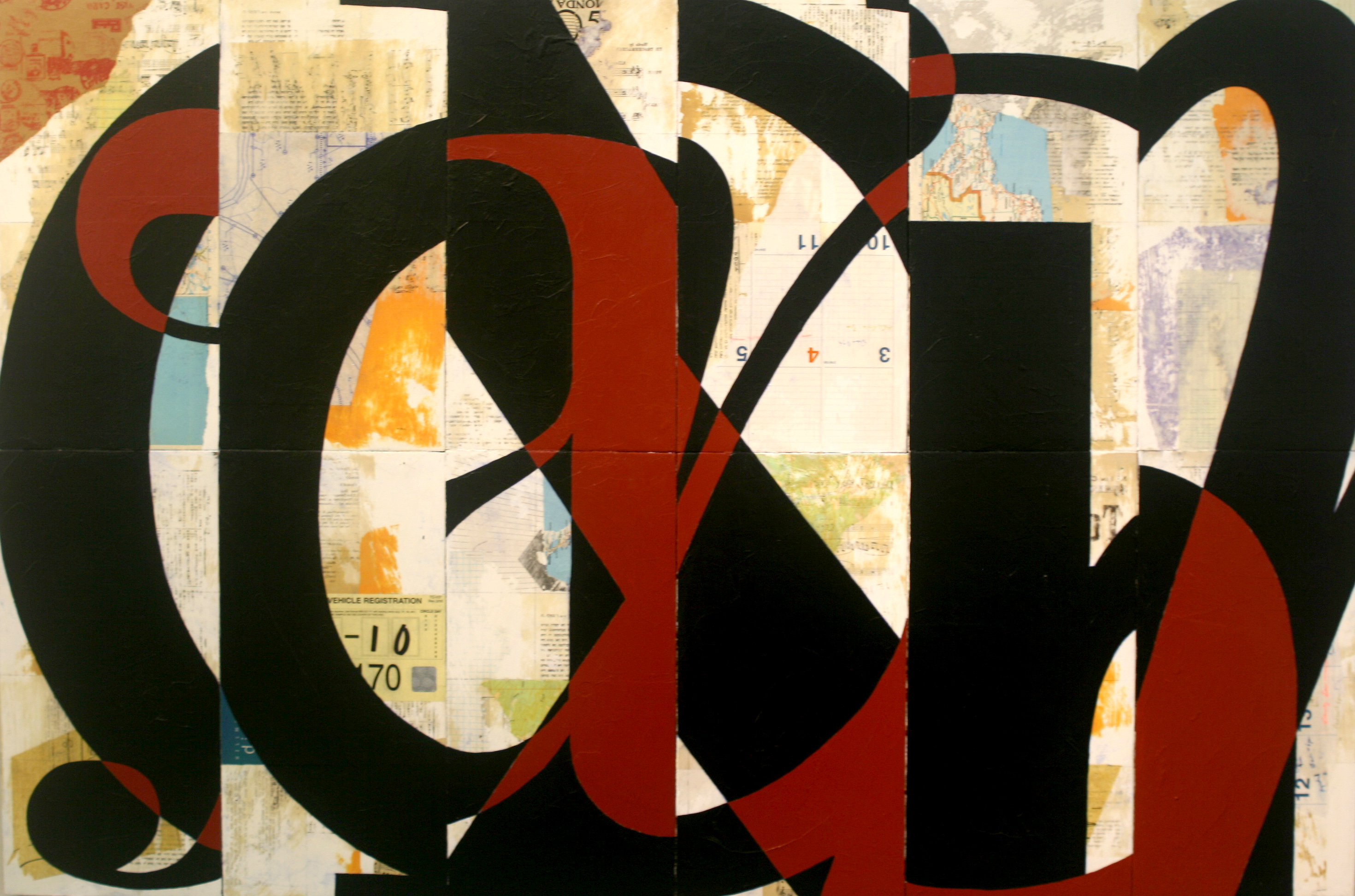 Tell us about your evolution as an artist. I started out with collage, and although I’ve branched out to other media since then, I still consider myself, fundamentally, a collage artist in that I’m constantly combining a variety of physical elements, images and media to create my art. Although I still do collage, I discovered that it also has its limitations — mainly in size. So I started creating larger work by combining images in digital compositions (essentially doing digital collage) and then using the digital composition as a guide for making physical work through layers of collage, painting, drawing and/or printmaking. As a grad student I decided to do an installation for my thesis exhibit, which led me to another realm of visual expression. Although I’ve continued to dabble in installation, including my most recent solo show, Elements, at Finch Lane Gallery this summer, I still feel most comfortable working in two dimensions, combining collage, acrylic and oil.

At the tail end of my grad-school career, I suggested an idea to some artist friends for a group show, the State Street Project, based on a road trip down Highway 89 from the Idaho border to the Arizona border. I hadn’t anticipated becoming a curator, but that show, which traveled to six different venues in 2008, led directly to another show the following year, The 9 Muses, an interdisciplinary effort involving 9 artists and 9 poets. I’ve curated at least one show each year since then. I consider curating an important extension of my own work as an artist. It’s been a richly fulfilling experience to work with several artists on these shows, with topics ranging from politics and immigration to honoring those who have influenced our work.

You have said that your art ‘focuses on the Hegelian concept of synthesis, both on formal and conceptual levels’. Explain. The German philosopher Hegel suggested that over the course of history an idea, the thesis, will arise, which will then be challenged by a contrasting concept, the antithesis. Eventually the two will be resolved by an overarching, unifying concept, the synthesis. When, as a grad student, I came across this concept of synthesis, it really resonated with me. It was as if someone had put into words what my artwork had been about all along.

My art — starting with collage and expanding to mixed media, installation and even my curatorial efforts — seeks to combine various, often disparate elements, into a unified whole. This is most obvious on a formal level. A collage, for example, may combine several images from unrelated sources; the challenge is to bring them together in such a way that they feel like they belong with each other — and hopefully so that they feel like they depend on each other for the success of the piece as a whole. Synthesis is also important to me on a conceptual level. In using collage and mixed media, I’m bringing together a variety of ideas that, by their juxtaposition, imply an interrelatedness. My hope is that this leads the view to consider potential meaning in a way they perhaps wouldn’t have otherwise. I don’t always have the same concept, or even a set concept, for each piece, but I hope to create conceptually open-ended work that will invite viewers to participate in the process of establishing meaning — hence another layer of synthesis as the viewer joins the artist in creating previously nonexistent meaning with the artwork as catalyst.

You’ve worked as an editor, programmer, and teacher. How do these pursuits affect your art? I think your environment always affects you as an artist. My work as a graphic designer, both in print and web, has definitely influenced my aesthetic, which already had a graphic bent even before I worked in those fields. These jobs have also provided the opportunity to learn new skills, from photography to HTML, which have provided additional practical avenues for artistic expression. I also love teaching. I’ve been inspired by my students’ creative approaches to problem solving and their inventive use of materials. Beyond that, I find that the creative energy of being in the classroom gives me additional drive to produce work when I get back into the studio.

What’s next for you? I’ve been exploring some new directions with my work — leaning toward a more minimal aesthetic. At the same time, I’m continuing to delve into new ideas with my text-based work. I’m also hoping to explore some new media, particularly encaustic. In addition to my own work, I’m continuing to curate shows. I’ll have a follow-up exhibit to Don’t Read This, which showed at the Salt Lake Library in January of 2015, called Don’t Read This Too, at the Springville Museum of Art July-September 2016. 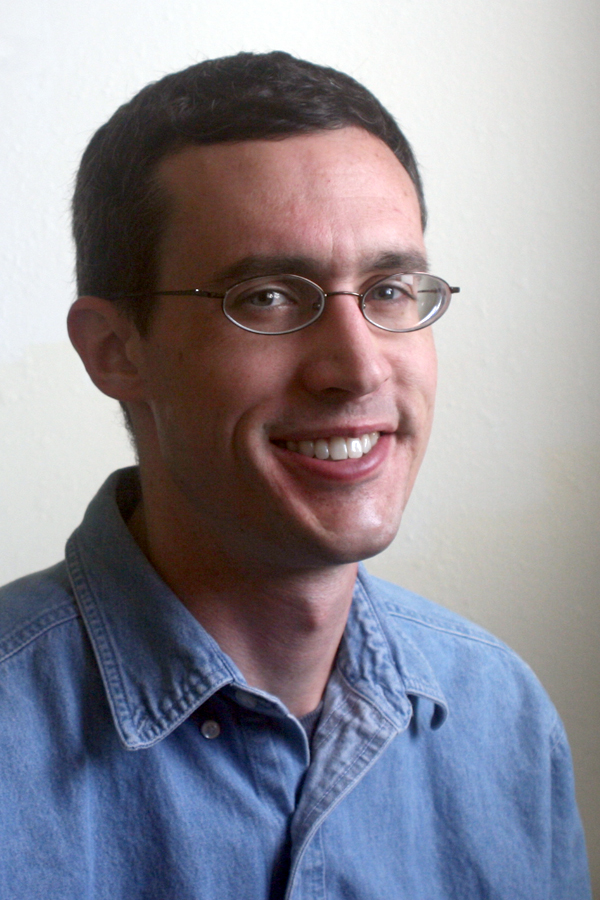