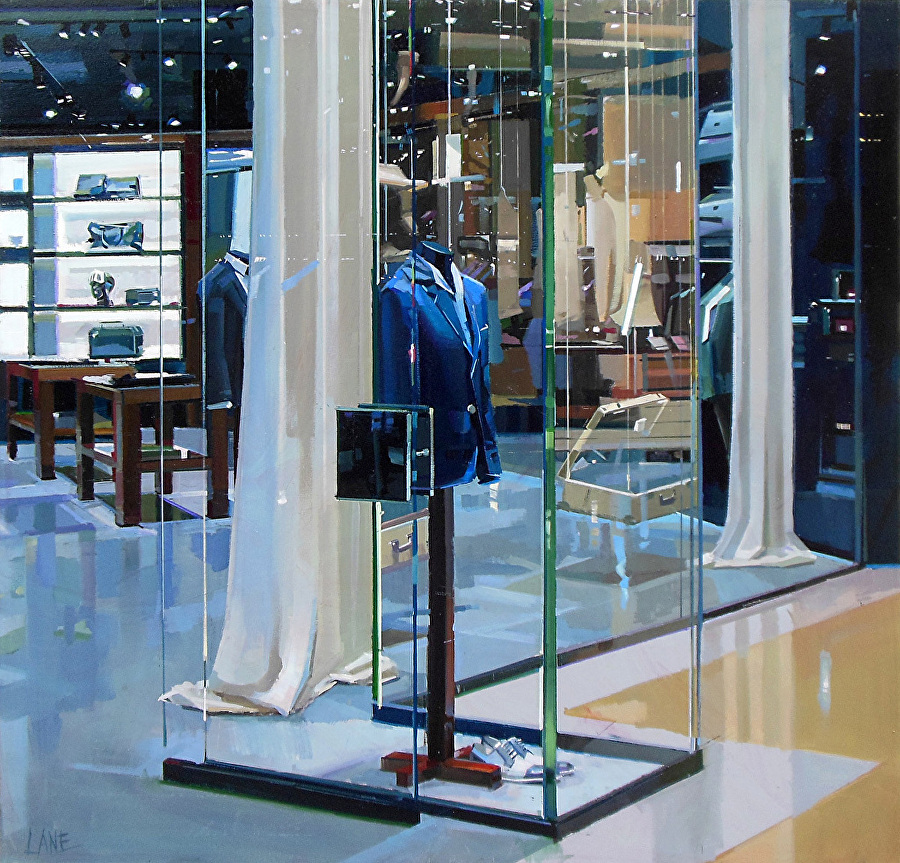 Lane Bennion is an incredibly talented painter and medical illustator. He has a new show called Inner Space opening at the Terzian Galleries in Park City, Utah on February 12, 2016. Bennion received degrees in medical illustration from the University of Utah and the Medical College of Georgia. He explains about his work, “I am often attracted to busy, chaotic subject matter and the irony that is present in them. I’m especially drawn to the visual noise found in retail stores, malls, and amusement parks. Often there is so much going on in these commercial environments, that it becomes an “attack” on our senses. This sensory overload seems to cause our minds to block out much of the visual noise, so that what was meant to be an attention grabbing seductive scene has the opposite effect.” Bennion lives in Utah. 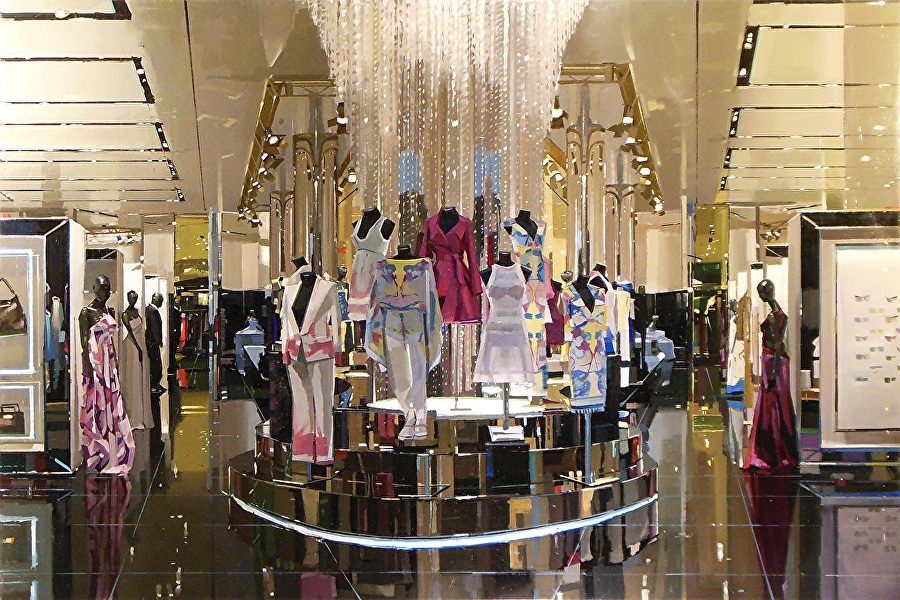 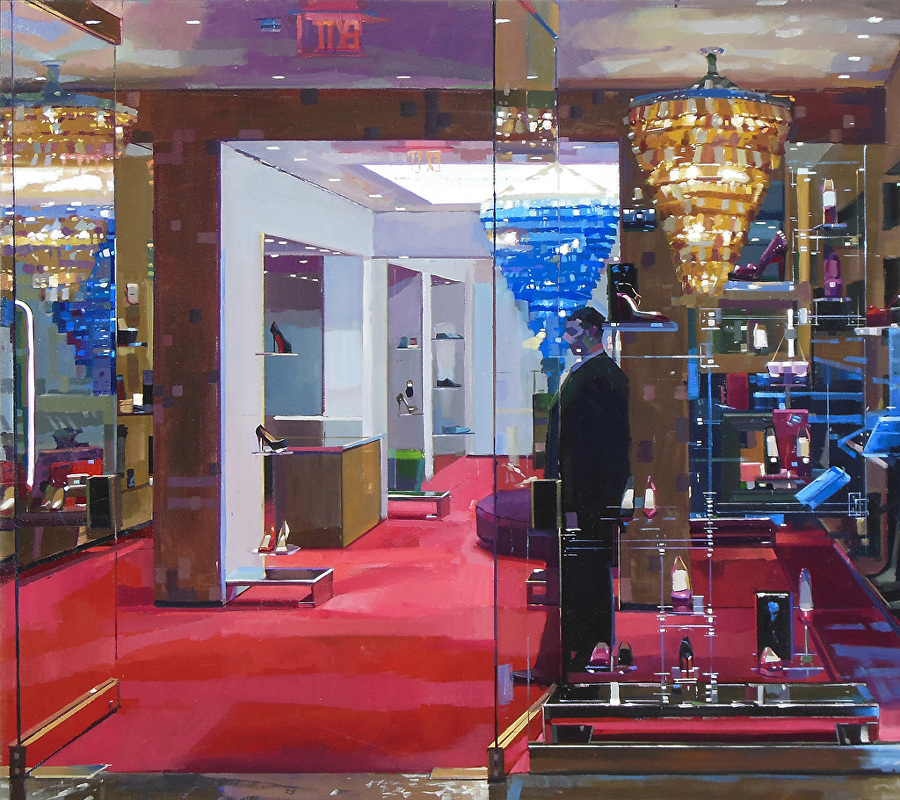 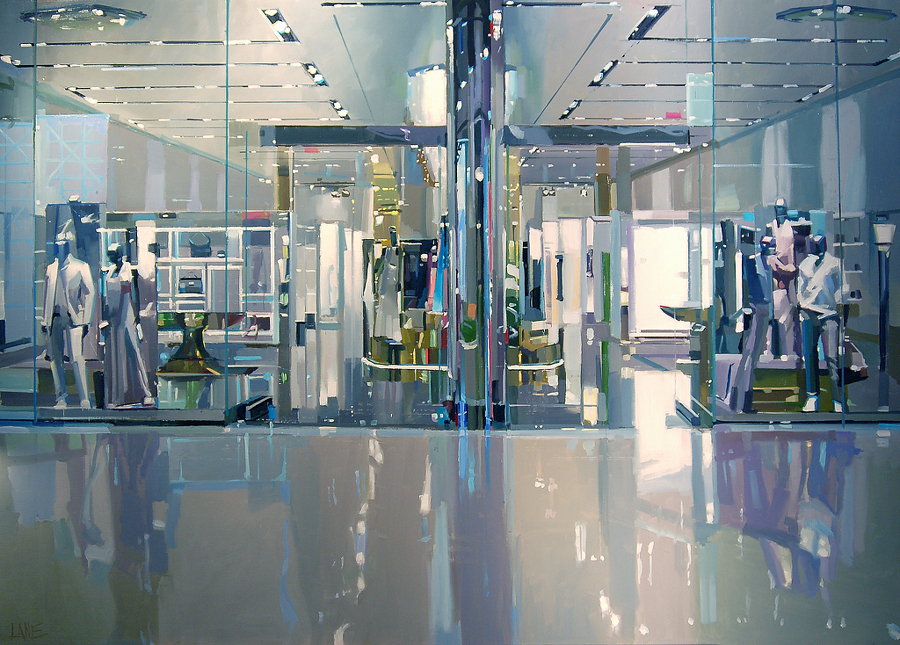 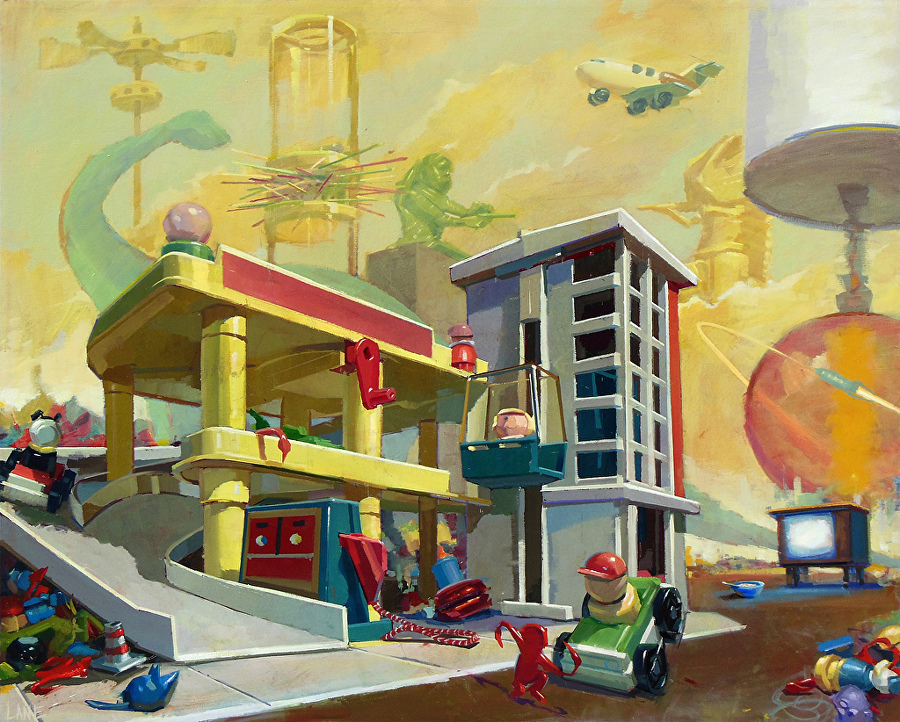 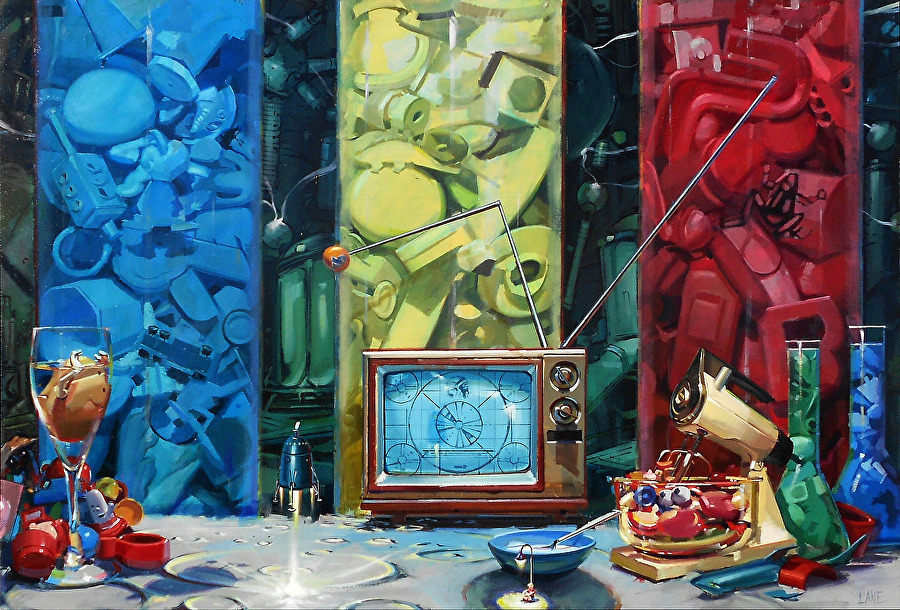 Tell us about your evolution as an artist. I grew up with a desire to draw and doodle, but I my family wasn’t an “artsy” one, so I was never exposed to quality art as a kid. I was also interested in anatomy and medicine so when it came time to decide on a career I chose Medical Illustration. In order to get in to an accredited Medical Illustration graduate program, an individual needs to take a lot of life drawing and pre-med courses.

The first real instructive drawing class I took was at Salt Lake Community College from Rick Graham. He taught triangulation as a method of measuring and drawing accurately. That method of drawing really gave me confidence that I could become a skilled draftsman. Later I transferred to the University of Utah and was taught more about triangulation from Paul Davis, the master that is credited with teaching many Utah artists how to draw the figure so well. Paul Davis and Rick Graham taught me how to become a respectable draftsman, but it was David Dornan that helped me develop my artistic eye.

I remember Dave talking about objectivity and subjectivity. I hadn’t really ever heard those words when I was in my early 20’s and what he was saying seemed so new and deep to me. To this day I don’t know exactly what he said in his objective vs. subjective speech, but I do remember that he stressed that an artist needed to see the world “as naively as possible”.

I remember being taught to see the world as if I arrived here from another planet or dimension and everything I saw I would be seeing for the first time. Simple objects or scenes that a person would normally take for granted and consider mundane or boring suddenly have the same weight or impact on ones mind. The light refracted through a cube of green Jell-O on to a white plate becomes as fascinating as a sunset. Seeing the world that way can give a painter the courage and ability to give special attention and focus on those mundane things that most people ignore or take for granted.

I learned that a good way to develop a personal style or vision was to focus on painting simple subjects. Don’t worry about tackling something to compete with the ceiling of the Sistine Chapel right out of the gate. Focus on learning how to paint and tackle simple visual problems through setting up simple still lives. Eventually through working with simple objects a painter often starts to find symbolism, either personal or universal, in those everyday objects. Eventually more complex compositions can be set up or discovered and interesting relationships can be found in how the various elements in a composition “interact”.

Your style is so unique. Talk a little about how it evolved. In the process of developing my technical craft as a painter by setting up and painting still life after still life, I decided to tackle something a little more ambitious. One day my wife told me she was tired of storing all of our boys cheap Happy Meal toys they had accumulated over the years and that she was going to throw them out. There was a large grey Tupperware bin full of them. As I gazed in to the sea of toys that was about to go away forever I said, “Wait, I want to paint these first.” I took the bin in to my studio and painted the contents of the bin in one big chaotic composition. I then mixed up the toys and did it again. Then I took out all of the toys and left only the red ones. Within the red toys I placed a plastic blue shark and created my first still life narrative. From there I arranged the sea of toys in different ways and found ways to suggest subtle narratives or relationships that I thought might add a little psychological weight and room for the viewer to play or dream within the composition. 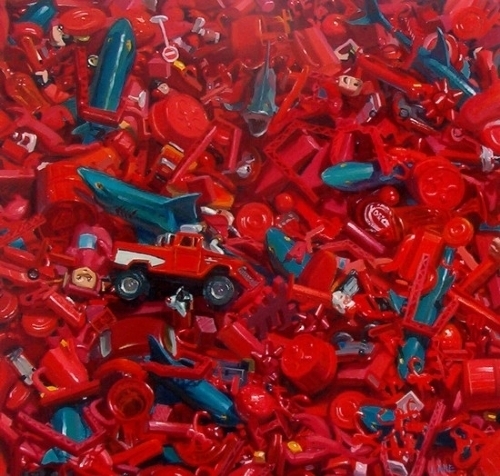 I prefer an open-ended composition. I like stories, films, music and paintings that are open to personal interpretation. I like it when three people can look at one of my paintings and find their own unique “meaning”, if there is one to be discovered. I think it goes back to the idea of seeing things objectively and presenting the viewer with a new world where they can let their own subjectivity add to the work. One of the joys for me in making art, is in enticing the viewer to participate in completing the painting and perhaps seeing the world with new eyes.

The other subjects I paint, like the carnivals, storefronts or other interiors often start as a result of the search for the routine overlooked things around me. There is a lot of visual noise aimed at consumers upon entering a shopping mall. It seems like each store is visually yelling, “come here, look at me” through elaborate displays, bright lights and shiny floors. These visually chaotic scenes seem to take on a quality of white noise and often our brain copes with the sensory overload by suppressing or ignoring much of it. I see the chaotic mess of a tub of happy meal toys much like these shopping mall scenes. It’s fun to paint them and find or suggest a little order or narrative in them.

You once wrote, “I like the challenge of finding beauty or poetry in the most mundane of objects, situations, or scenes.” What are you working on next? The paintings I’m working on now aren’t too much different from last year or the year before. However, there are a few things I’ve wanted to try, to shake things up. I have always been interested in the “Space Age”, “Atomic Age” or images that are called “Retro Future”, I believe. I was born in 1969 so I caught the end of the space race. I remember there was still a little promise of flying cars, jetpacks and vacations to the moon, when I was a child. I like looking at illustrations and sci-fi pulp artwork from the 1950’s and 60’s that show the world that I was hoping to live in by now. I’ve been trying to find ways to assimilate that imagery in to my work. 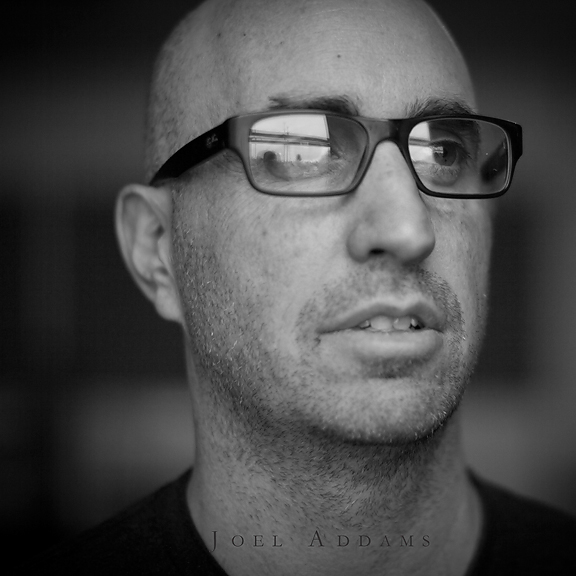