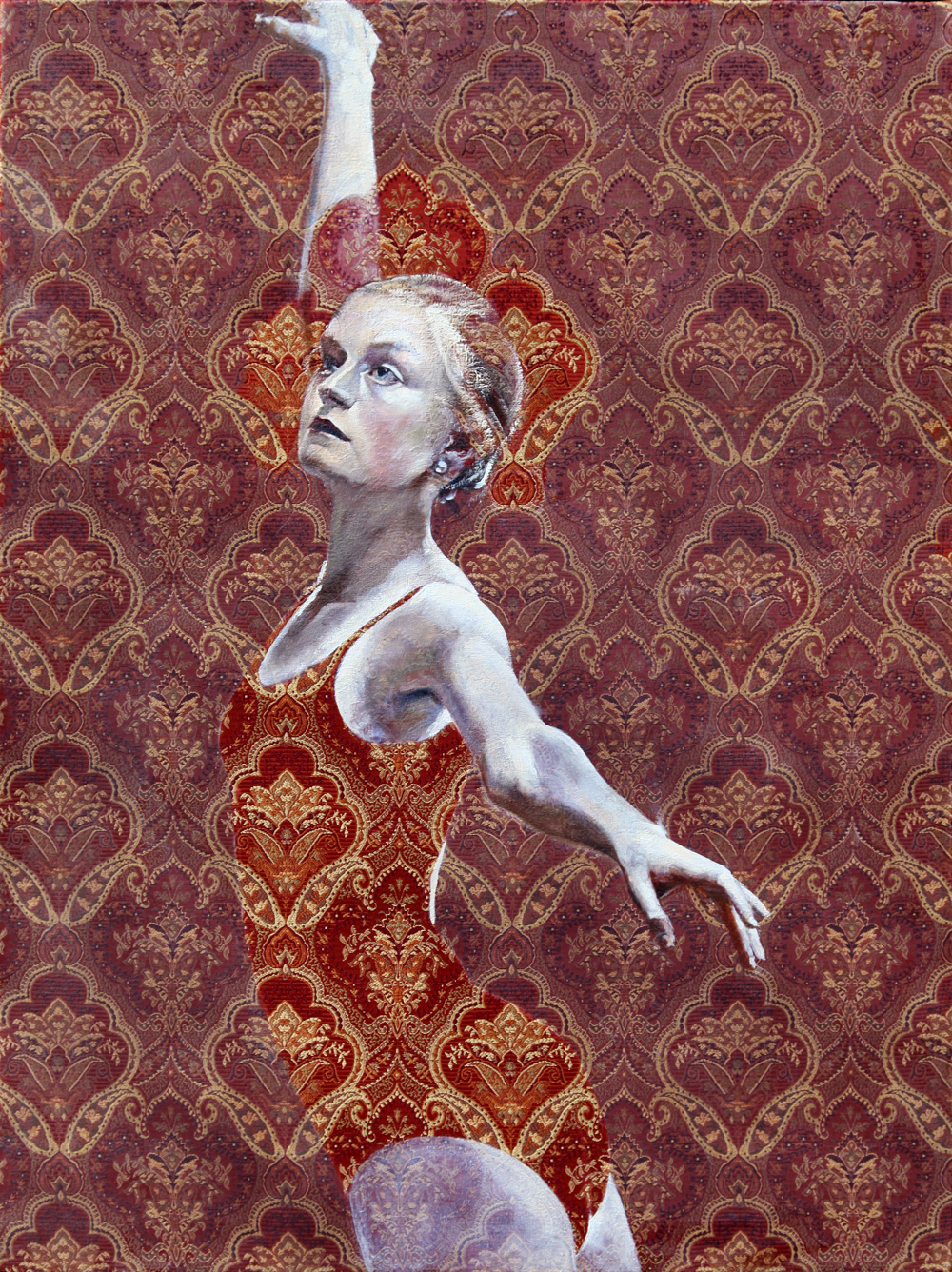 Nathan Florence has a beautiful series of oil paintings on textiles instead of canvas. As he explains, “I prefer to paint on a surface that has some challenges to it. I saw a documentary where Jack White said he played guitars with problems because he wanted playing ‘to be a fight’ and I immediately identified with that.” Florence received a BA from Swarthmore College and studied at the International School of Art in Todi, Umbria, Italy. He lives with his family in Utah. 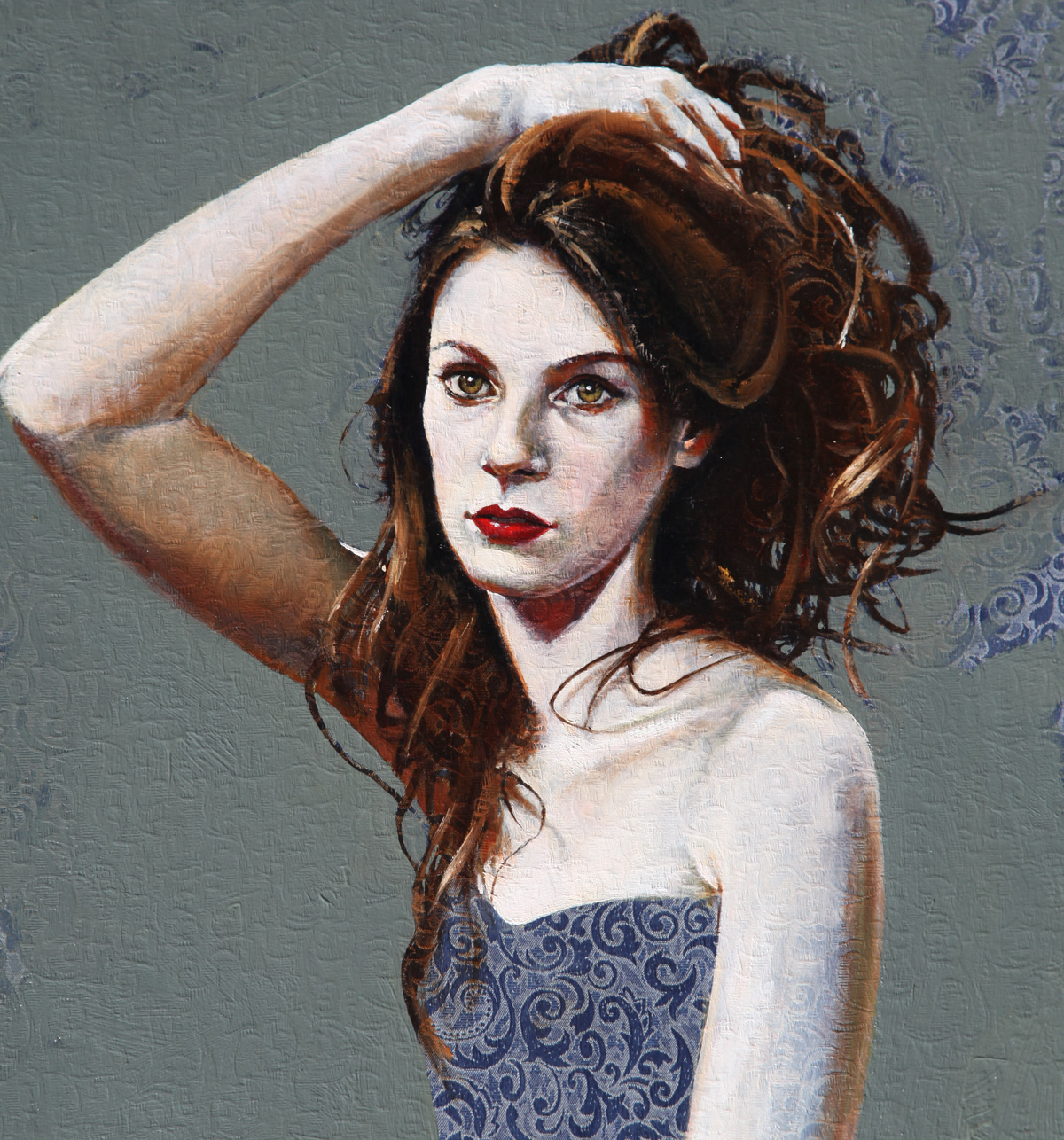 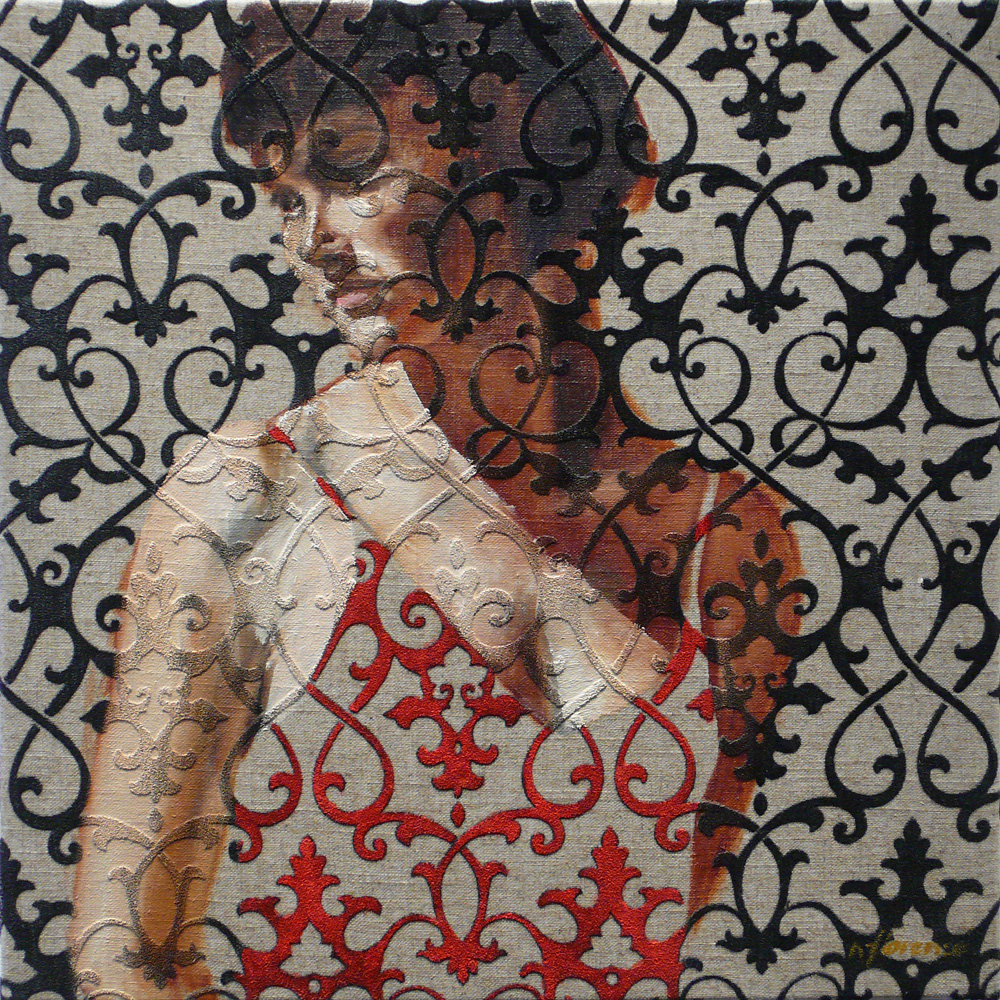 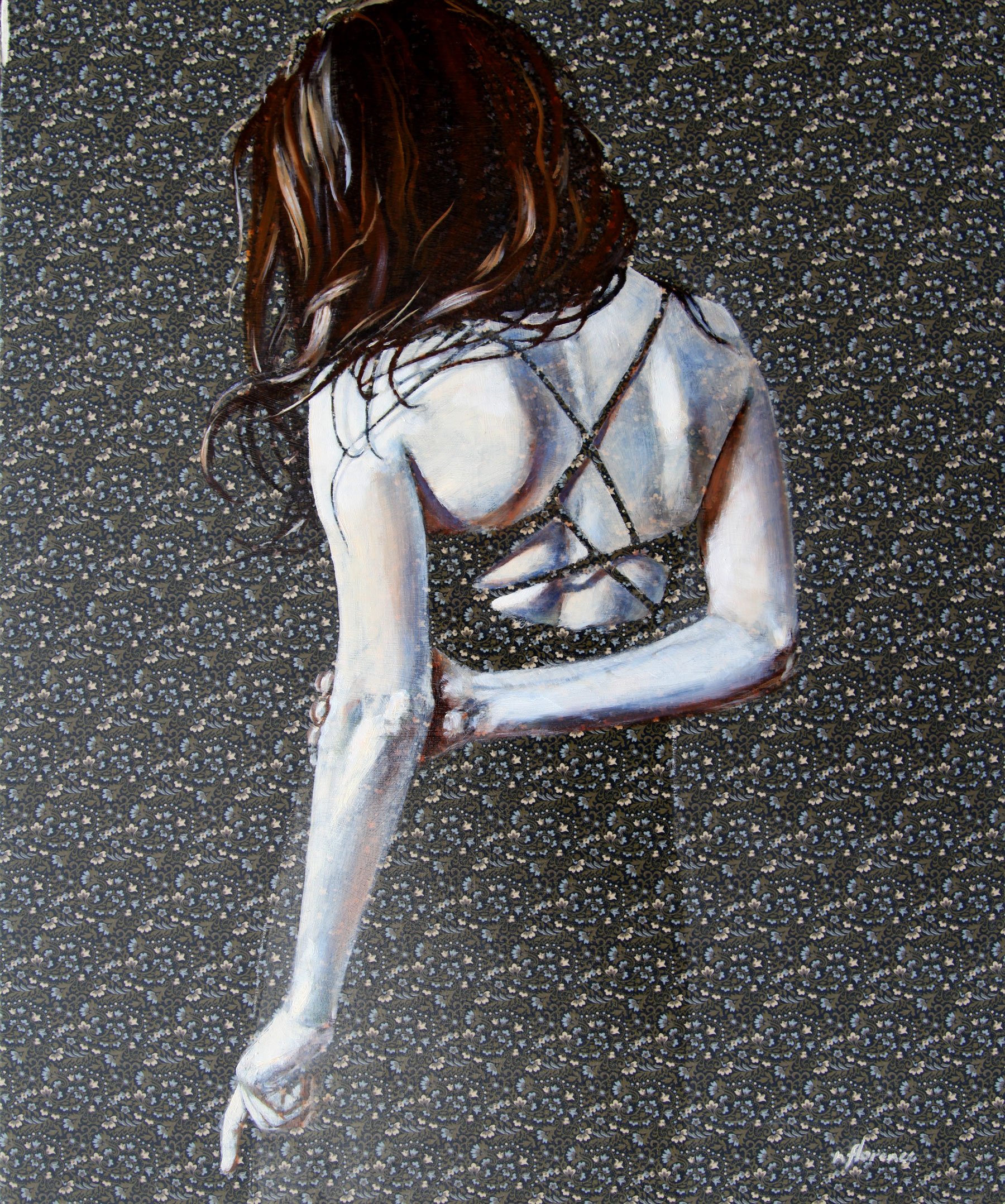 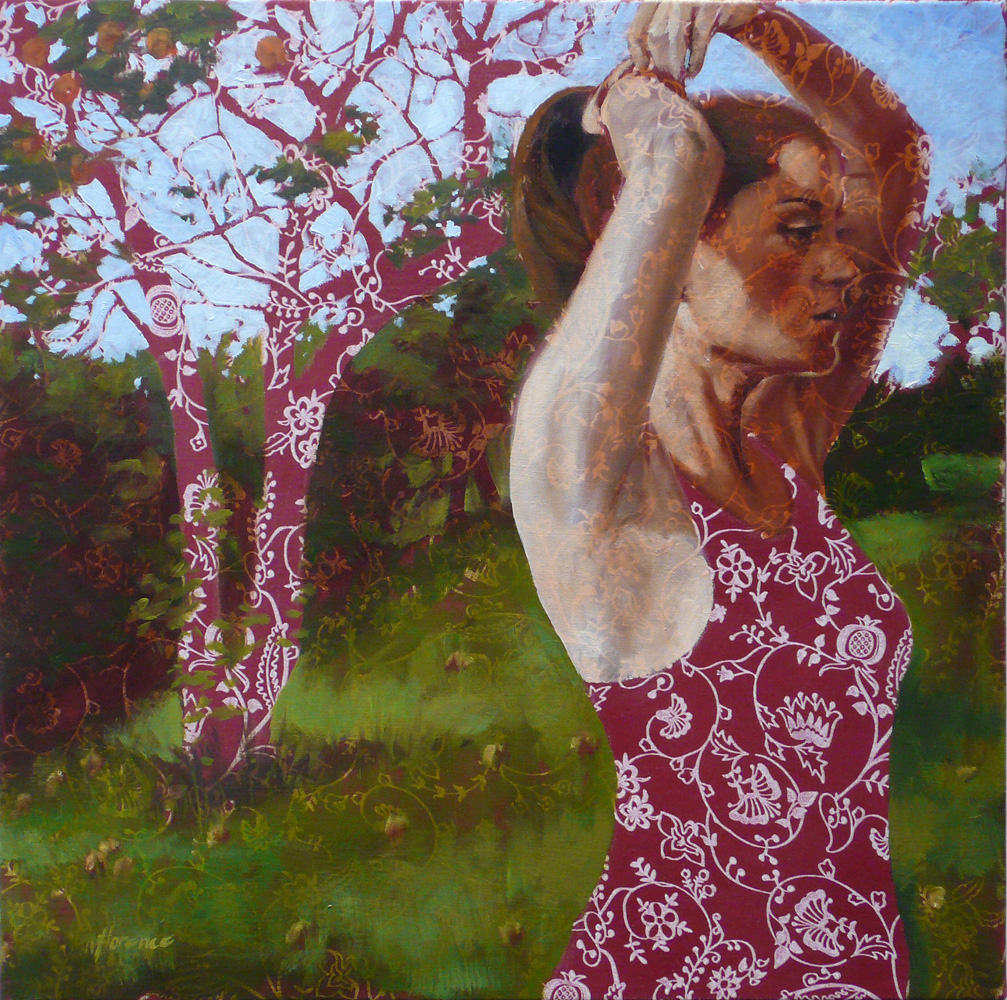 You often paint on textiles, You once said, “I love the symbolism of the patterns that underlie our lives and I love the way I can hide or reveal the fabric as I want to.” The paintings on fabric have been a really exciting series of experiments. It’s a new set of challenges. Like the abstract underpaintings, the fabrics work with and against me.

Tell us about your evolution as an artist. I should start answering that by saying that it took me a long time to accept for myself that being an artist was an acceptable profession. I have some sort of Puritan, maybe Mormon-Puritan work ethic that blanched at the idea that one’s job could be fun! Aren’t you supposed to hate your job? Plus it didn’t seem to fit easily into this other part of what I wanted, which was to do something that made the world better–and by this I mean like Doctors without Borders or similarly dramatic contributions. I wasn’t putting art on that same level of “contributing”. I had some excellent mentors who helped me get past this idea and dropped my pre-med/engineering studies to get an art degree. I was drawn to oil painting because it is so low tech. It fit in with my early romanticism of art, in which it was mostly about beauty. Artist as activist and social observer developed as I studied and realized how I could wrap them together.

I’ve always loved drawing and painting people, so they continue to dominate my subject matter. I can easily get caught up in detail so it became important for my process early on to introduce challenges. This has included brushes way too big for the subject, Egbert brushes that have really long, unwieldy bristles, really cheap brushes, it’s a long list. It’s also part of what interested me in preparing my surfaces differently so I started building up layers of abstract texture and color on panels and canvases before I painted on them. The unpredictability of the surface is amazing. I could then leave areas of the abstract untouched in the final process or sand/scrape down to layers underneath. This is what eventually led me to one of my current processes with patterned cloth. My early questions about finding balance as an artist and making a contribution to society have kept me involved in social causes and community activism and led to one of my current projects directing a documentary about a group of Mormon artists. You can see more about that on my website for the film.

Your parents were photographers. Do you see their creative approach in your own work? My sense of light and composition definitely comes from them. I grew up with great photography books around the house and looking at slide shows of their work. Both were amateur photographers but we had a darkroom in the house and I got to spend time in there with them watching that alchemy.

What’s next for you? I can’t sit still. I have a show of paintings up at Modern West Fine Art in Salt Lake that runs through mid-January and a couple of portrait commissions on my plate right now. My main focus is getting the documentary finished. It is a long process and we’ve got great momentum right now. Geralyn Dreyfous, Academy Award winning director/producer, just joined as one of our executive producers and we are in post-production. I’m wearing my producer hat most of the time right now, in that I’m mostly fundraising! It’s an important and compelling story right now in our national and Mormon history. How do we balance our art/passion with our faith? Trevor Southey, one of the artists in the film, was gay and it was through the support of his Mormon artist community that he came out. It’s a complicated, beautiful story. 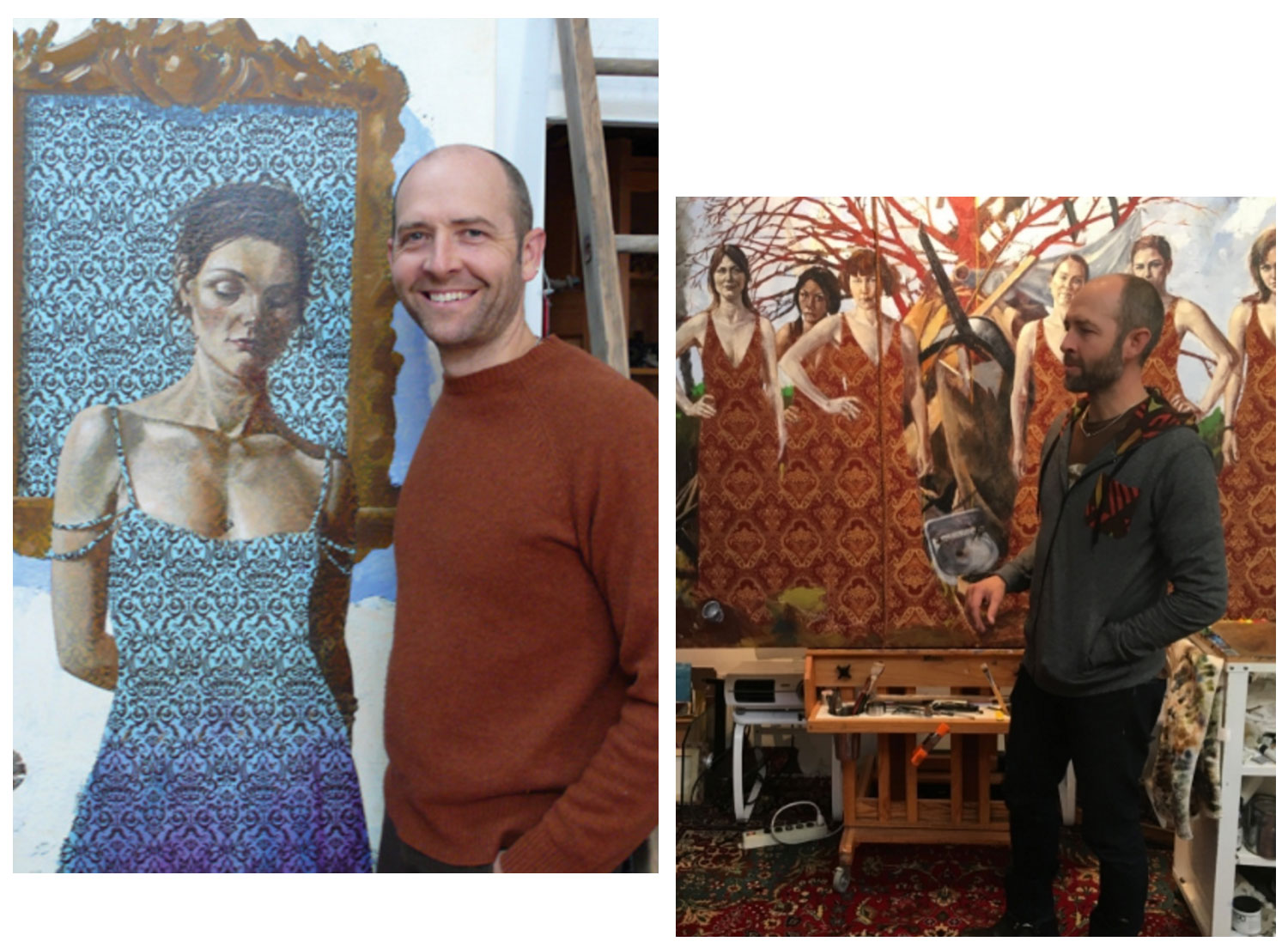