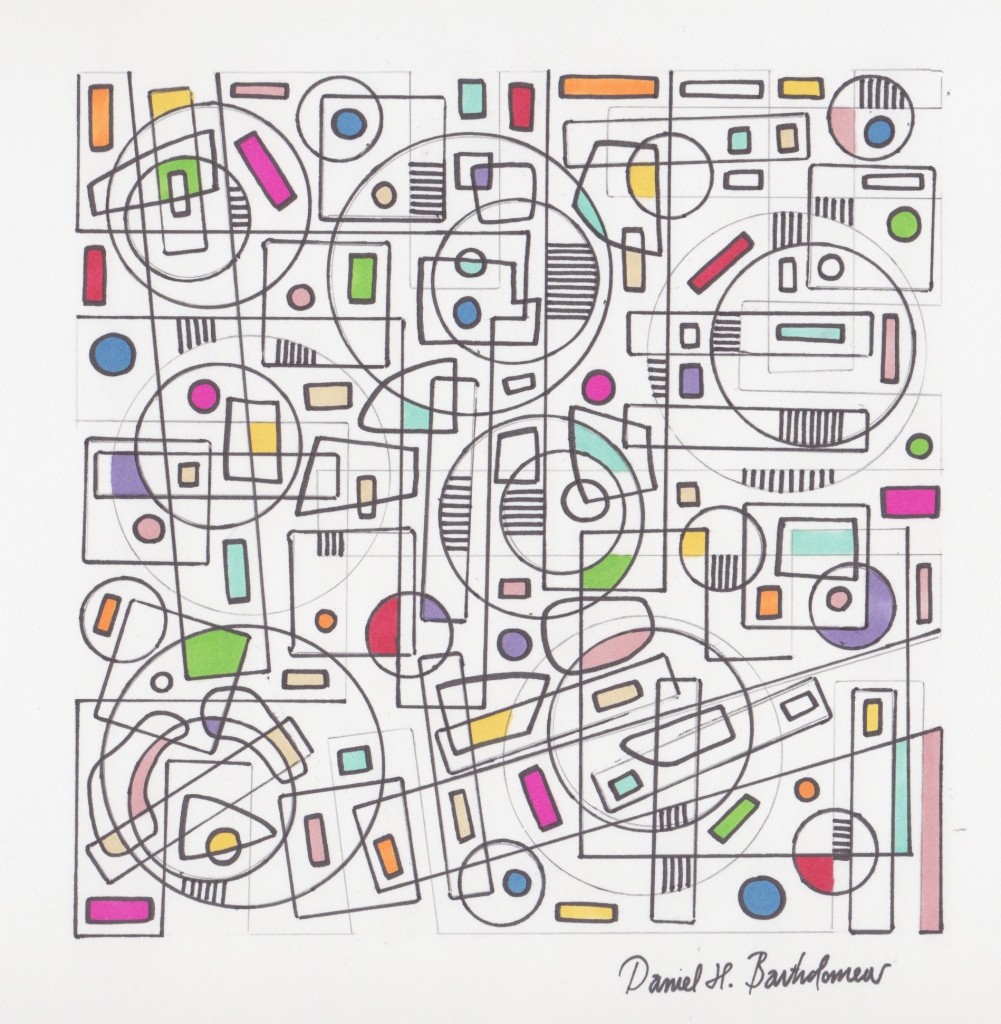 Daniel Bartholomew comes from an atypical art background but is now an accomplished artist with a unique style and voice. His background includes studies in Hebrew and Arabic and a degree in Middle Eastern Studies. He studied at Hebrew University and worked at Yeshiva College. For a time he worried his art did not connect on a spiritual level, but he explains, “It took me awhile to realize I was wrong about my artwork not having spiritual value. I have realized (or at least I feel) that the artwork is cheerful and friendly and fun and that these are spiritual values…Being a Mormon is a big part of who I am and I want to reflect that in my art in a way that is respectful, loving, faithful, etc. That’s a tricky business, but certainly completely possible.” He lives with his family in Utah. 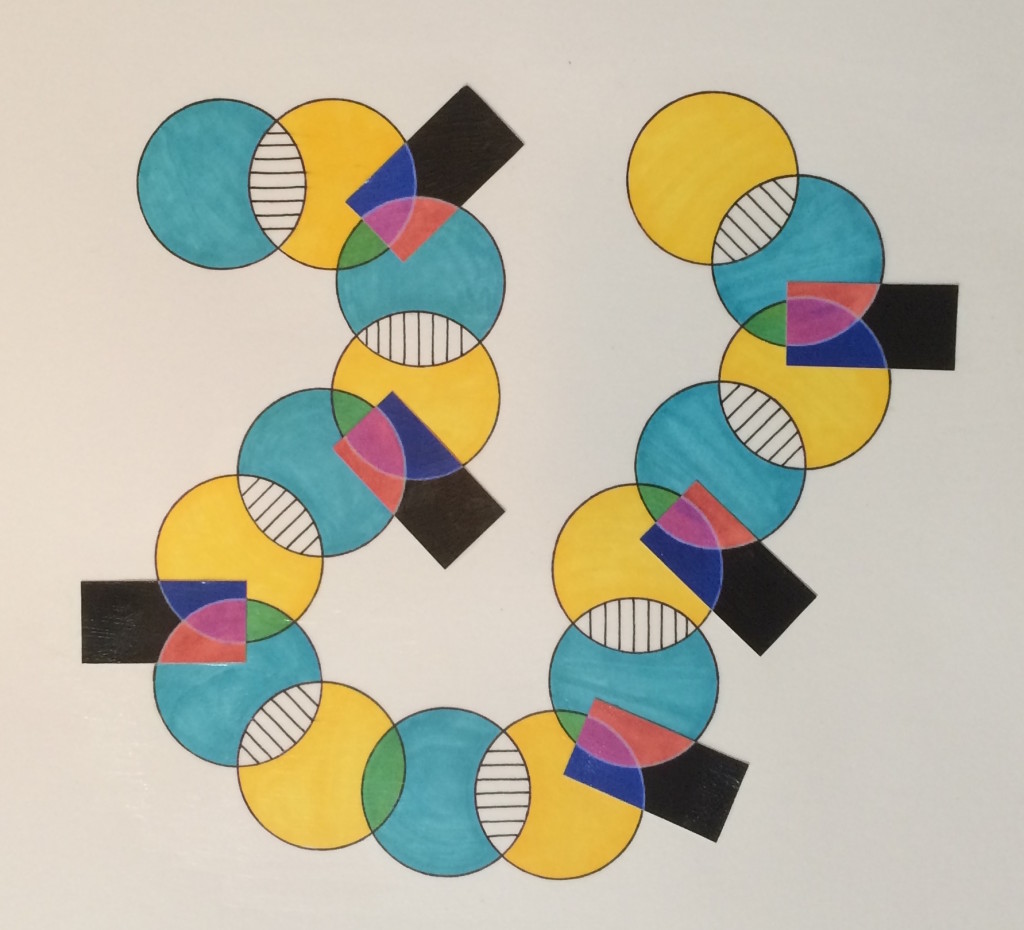 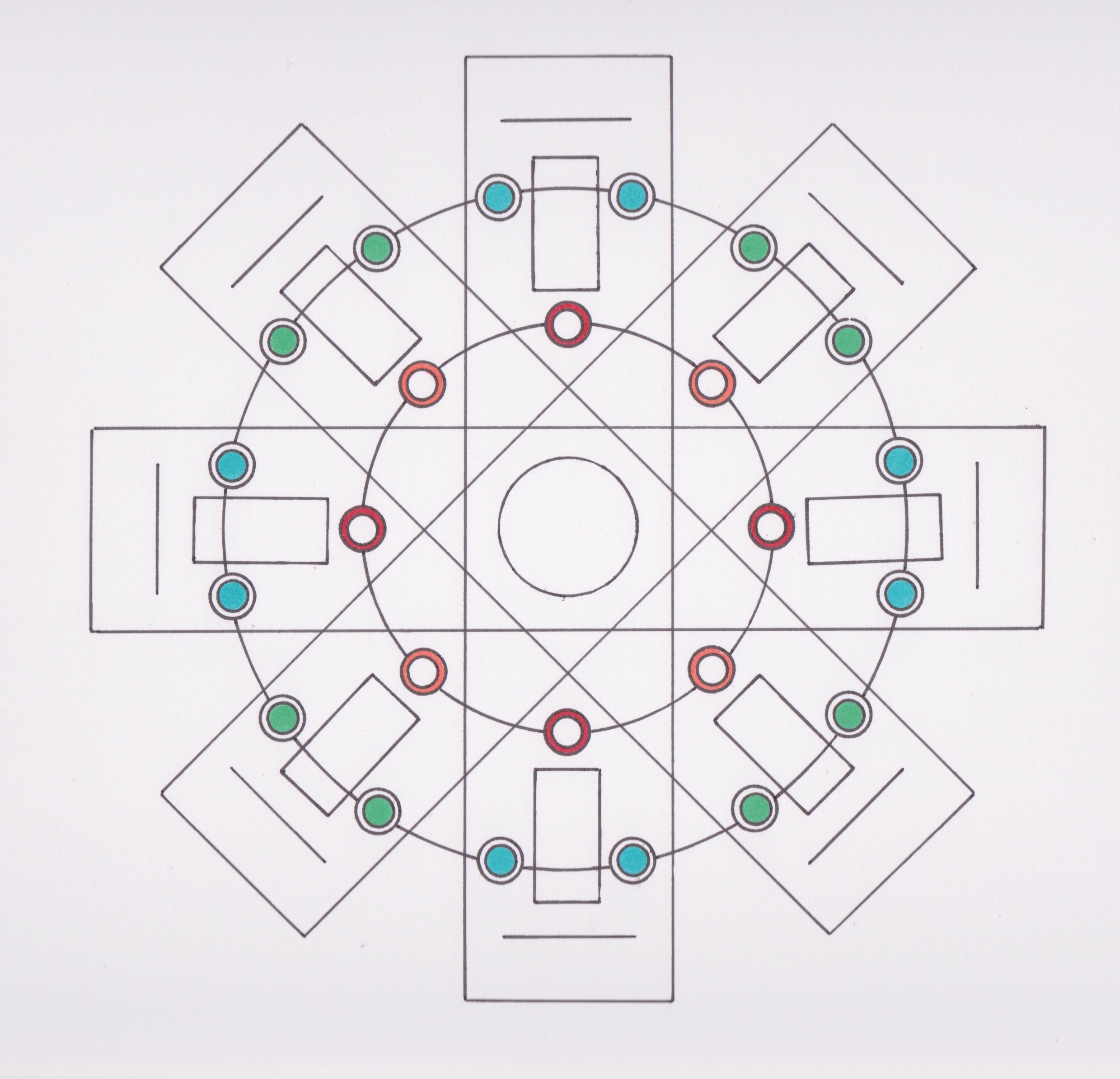 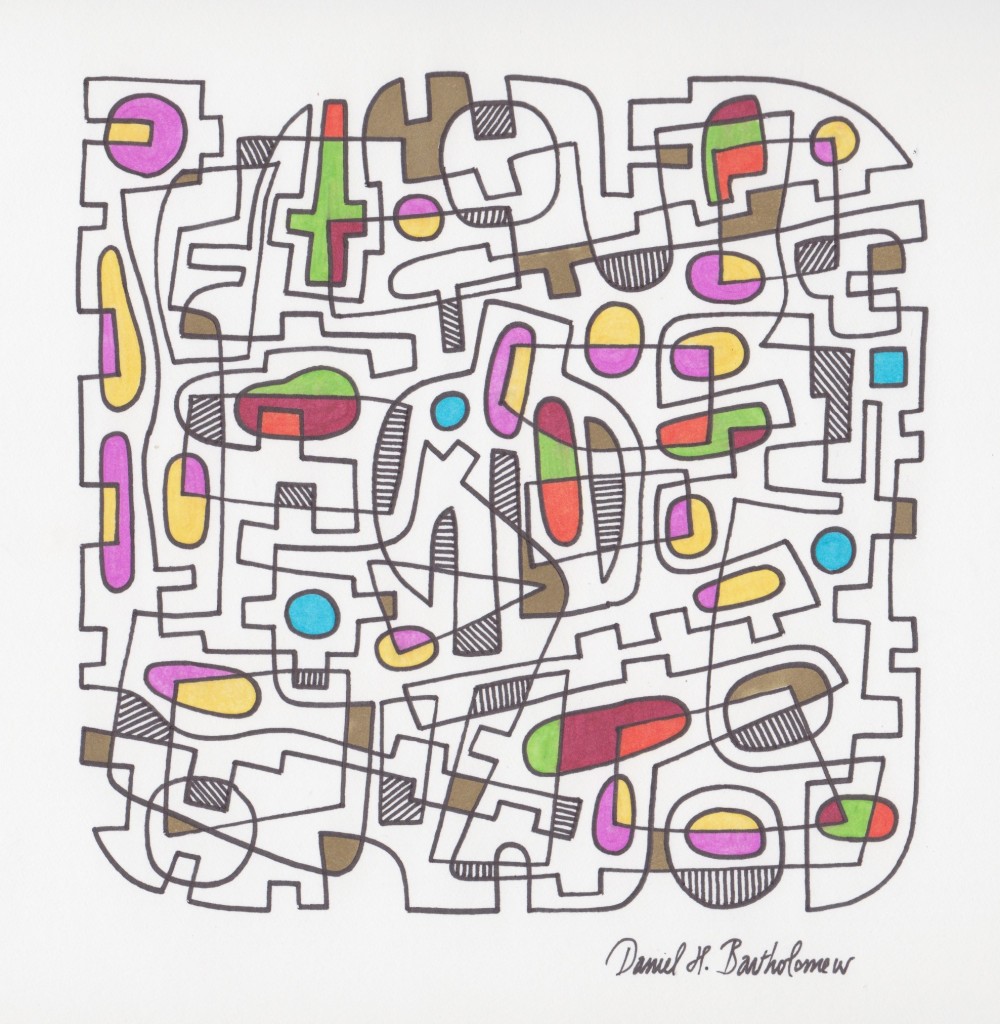 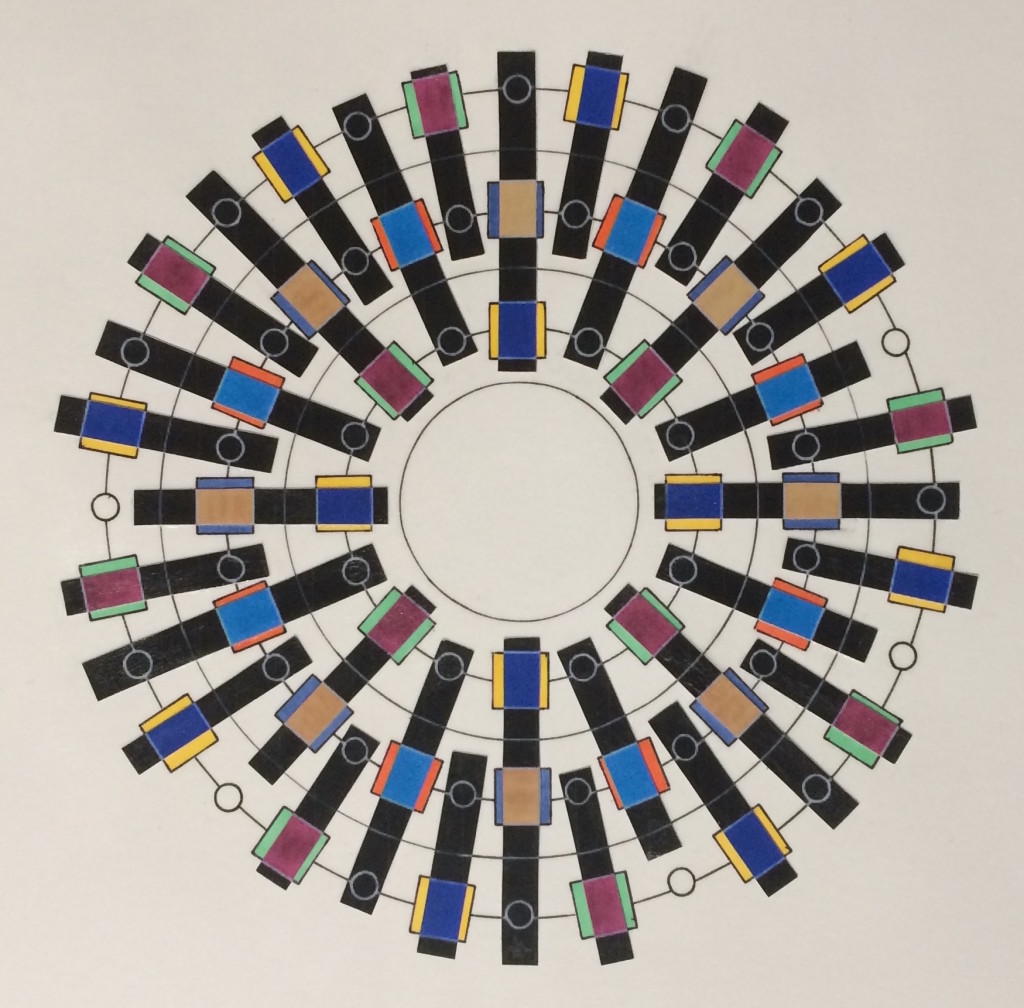 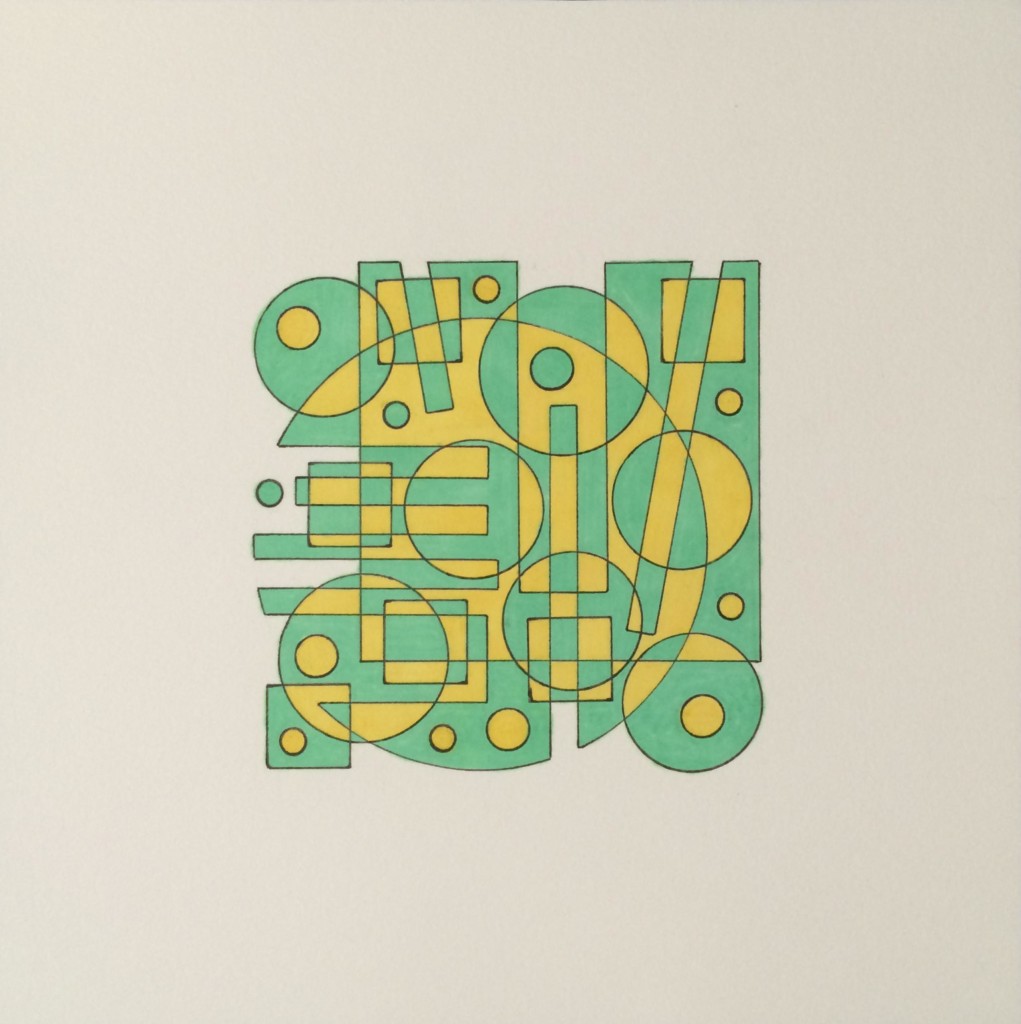 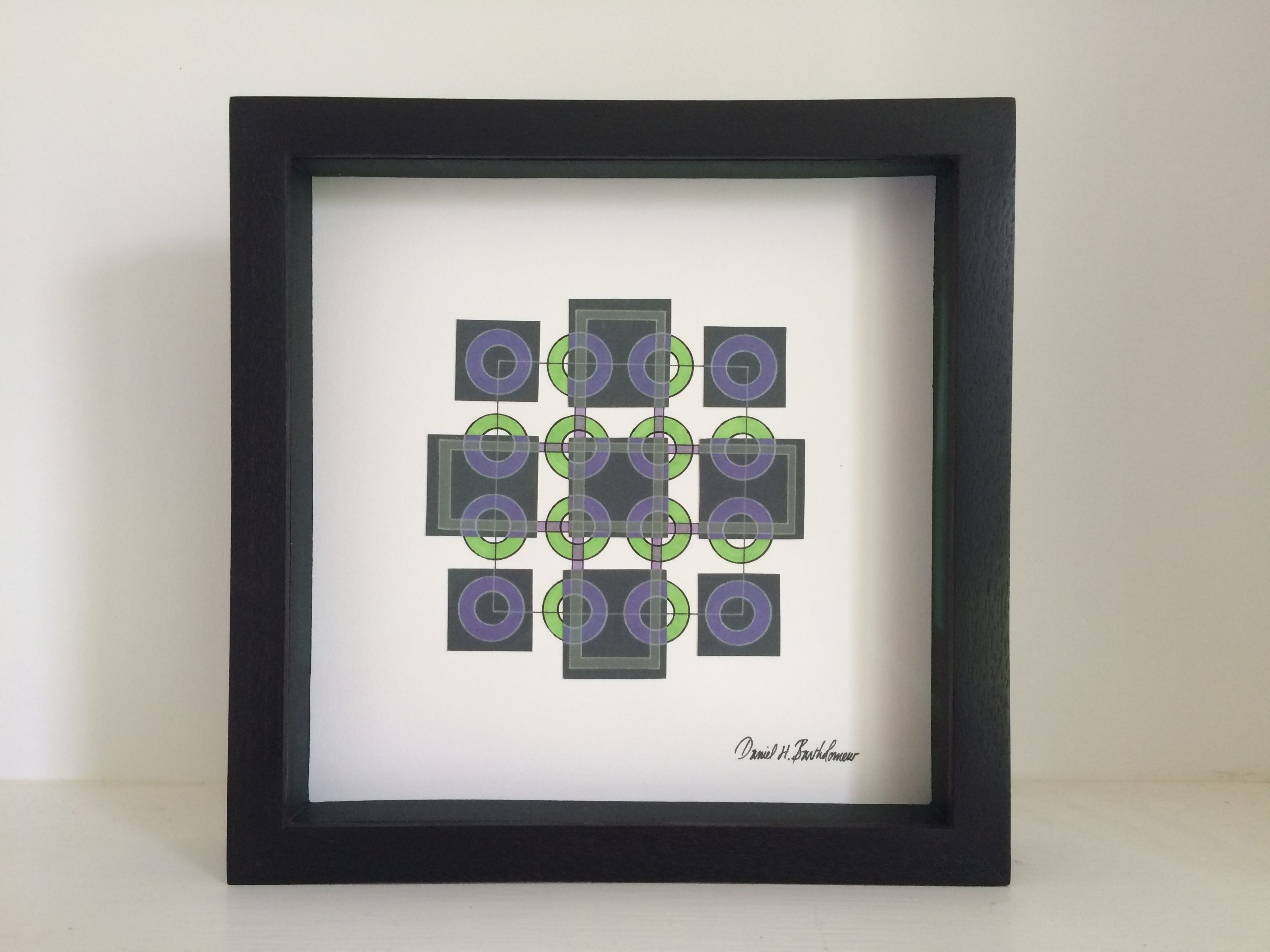 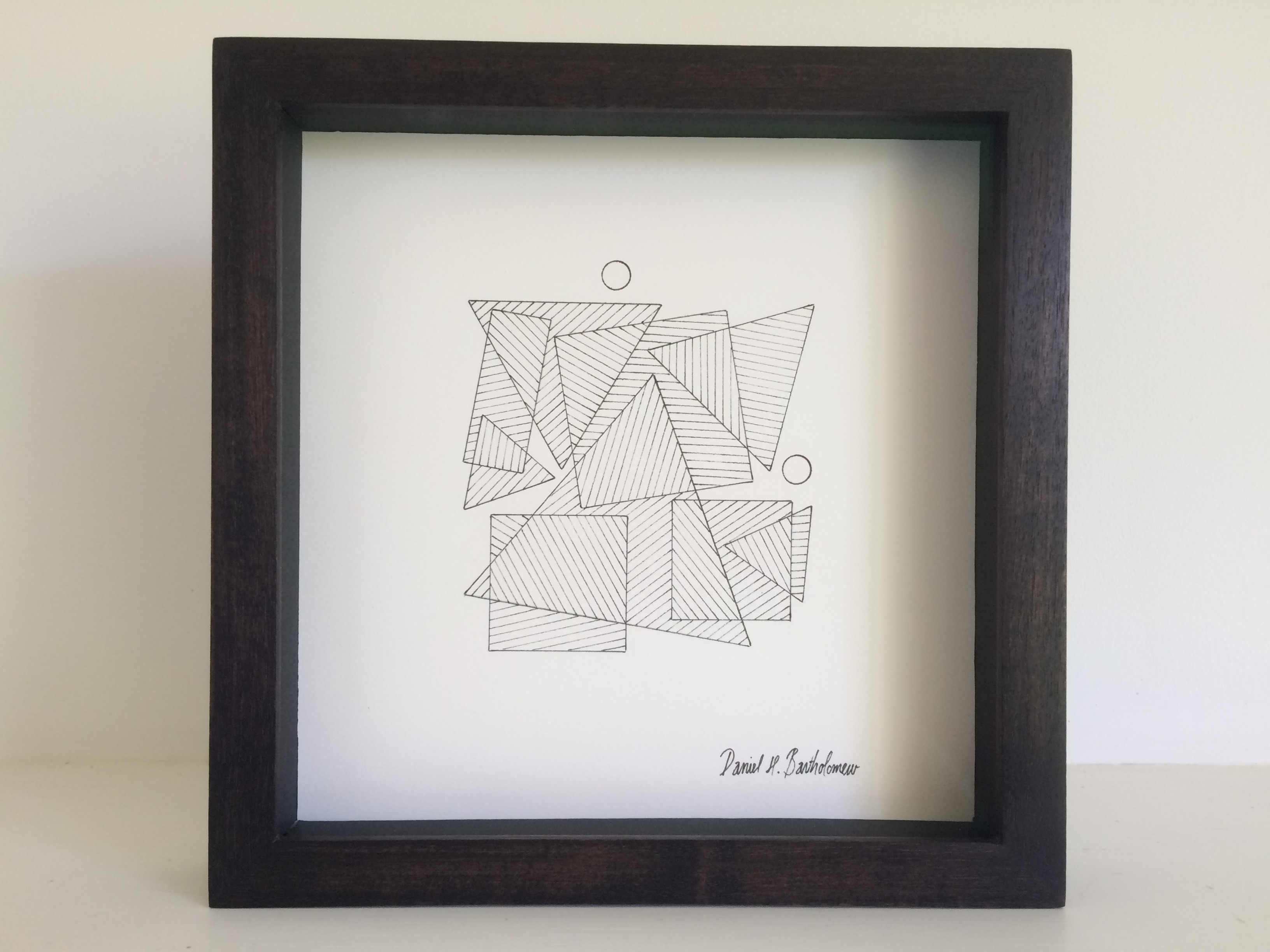 Tell us about your evolution as an artist. I have long enjoyed experimenting with form, line and color in a fairly spontaneous and intuitive manner – almost never knowing ahead of time what I would be creating and always with a strong inclination towards abstraction. That is the single constant thread that I can see when looking back at the path I’ve taken. Other than that constant, there have been fits and starts, where at certain times I was inspired – by an art teacher, a humanities teacher, artworks that I saw in a museum or in an office building, or books about specific artists – to keep on working and to approach my artistic work less informally and more seriously. For a number of reasons, there was also a time when I made a very determined effort to quash my artistic instincts and go in a different direction. I ended up studying Hebrew and Arabic for a period of years, living in Jerusalem for a period of three years, and eventually completing a degree in Middle Eastern Studies at the University of Utah. But during that time period, my artistic feelings and inclinations were always closely shadowing me, even though I had chosen to pursue formal studies in another discipline.

Artistically, I don’t doubt that I paid a professional price for that decision. But I am also relieved that I have studied other things and lived in another part of the world. Consequently, my perspectives on many aspects of life and the world have deepened. Also, I am grateful for the wife and daughters that I have today – a family that would not have existed if I had pursued art more immediately at that earlier point in my life. Some years ago, I read a talk given by Elder Henry B. Eyring, where he spoke about a conversation he had with his father. “He asked his father for help with a complex mathematical problem. “My father was at a blackboard we kept in the basement,” Elder Eyring recalls. “Suddenly he stopped. ‘Hal,’ he said, ‘we were working this same kind of problem a week ago. You don’t seem to understand it any better now than you did then. Haven’t you been working on it?’” A little chagrined, Hal admitted he had not. “You don’t understand,” his father went on. “When you walk down the street, when you’re in the shower, when you don’t have to be thinking about anything else, isn’t this what you think about?” “When I told him no,” Elder Eyring concludes, “my father paused. It was really a very tender and poignant moment, because I knew how much he loved me and how much he wanted me to be a scientist. Then he said, ‘Hal, I think you’d better get out of physics. You ought to find something that you love so much that when you don’t have to think about anything, that’s what you think about.’” At the time I read this, I realized immediately that when I am walking down the street, when I am in the shower, when I don’t have to be thinking about anything else, art is what I most naturally think about.

You have a pretty atypical career path. How has your background shaped the content of your art? I suspect that just about anything that an artist experiences in life ends up informing their artwork in one way or another. Even though I did not take art courses as an undergraduate or a graduate student, my educational experiences, even some of my early educational experiences, have informed my artistic process, both in thinking about art and making art. I had a fourth-grade teacher who rarely smiled and was very strict – she taught me to write a very neat cursive penmanship. Her stern instruction likely laid a foundation for my continual interest in the use of repetitive rhythmic parallel lines. I had a high school humanities teacher named Norris Birnbaum. Besides requiring his class to read “Brothers Karamazov”, he also taught us about the foundational principles of aesthetics: form and proportion, balance and symmetry, rhythm, dynamics, illusion, tension and release, ambiguity. He also coined a unique term: “aesthetic motivalence” which describes how these various principles are integrated into a single work. Previous to his instruction, if shown a specific work, I could likely only say “I like it” or “I don’t like it.” Mr. Birnbaum provided me with a rubric by which I could describe why I felt a specific work was effective or ineffective. I had a wonderful high school art teacher named Paul Hess who was a realist in his approach to his own work and how he taught his classes. Even though I had a very different approach to art, he made room in his schedule for me to take four or five classes from him over the course of a year and a half. From him I learned the importance of approaching the work more formally and using proper fine art materials. I also very much liked that he had music playing in the room while we worked on our projects. I usually listen to music while I am working on art.

Some people refer to abstract art as “non-representational art” – but I have a bit of a problem with that term. My feeling is that artwork should somehow be a representation of the life experiences and lessons of the artist who is doing the work. Of course there are abstract artworks out there that are completely random and chaotic and consequently do not in fact represent anything. To me, that kind of work often feels lifeless. I do look for a sign of a deliberate mind and heart and hand at play. The abstract works I most appreciate are done by artists who deliberately tread a line between order and chaos, between that which random and that which is deliberate, in a manner that makes aesthetic sense, that aspires to be beautiful or intellectually powerful in some way. Some artists lean in a specific direction – the examples that most readily come to mind are Wassily Kandinsky and Jackson Pollock. I often feel that Kandinsky is more ordered in his approach and Jackson Pollock leans more towards the chaotic. But both artists are working towards a deliberate aesthetic effect, both are exercising some level of calculation in what they are doing.  That is the ground, the span or continuum in which I want to tread. So I do look for meaning and for ways to appropriately accentuate that meaning in my work.

What’s next for you? I have been working on smaller artworks for some time now, partly because we were living for almost ten years in one-bedroom apartments in New York City. I had to store my art supplies and pull them out for a few hours at night and then put them away again. We didn’t have much space to work with. Now that we are living in a home in Salt Lake City, I have a dedicated room/studio – which makes it much easier to begin a project and be able to come back and pick up work again right where I left off. So I need to break out of my shell a bit and do some pieces that are larger and more complex. I look forward to making that happen.