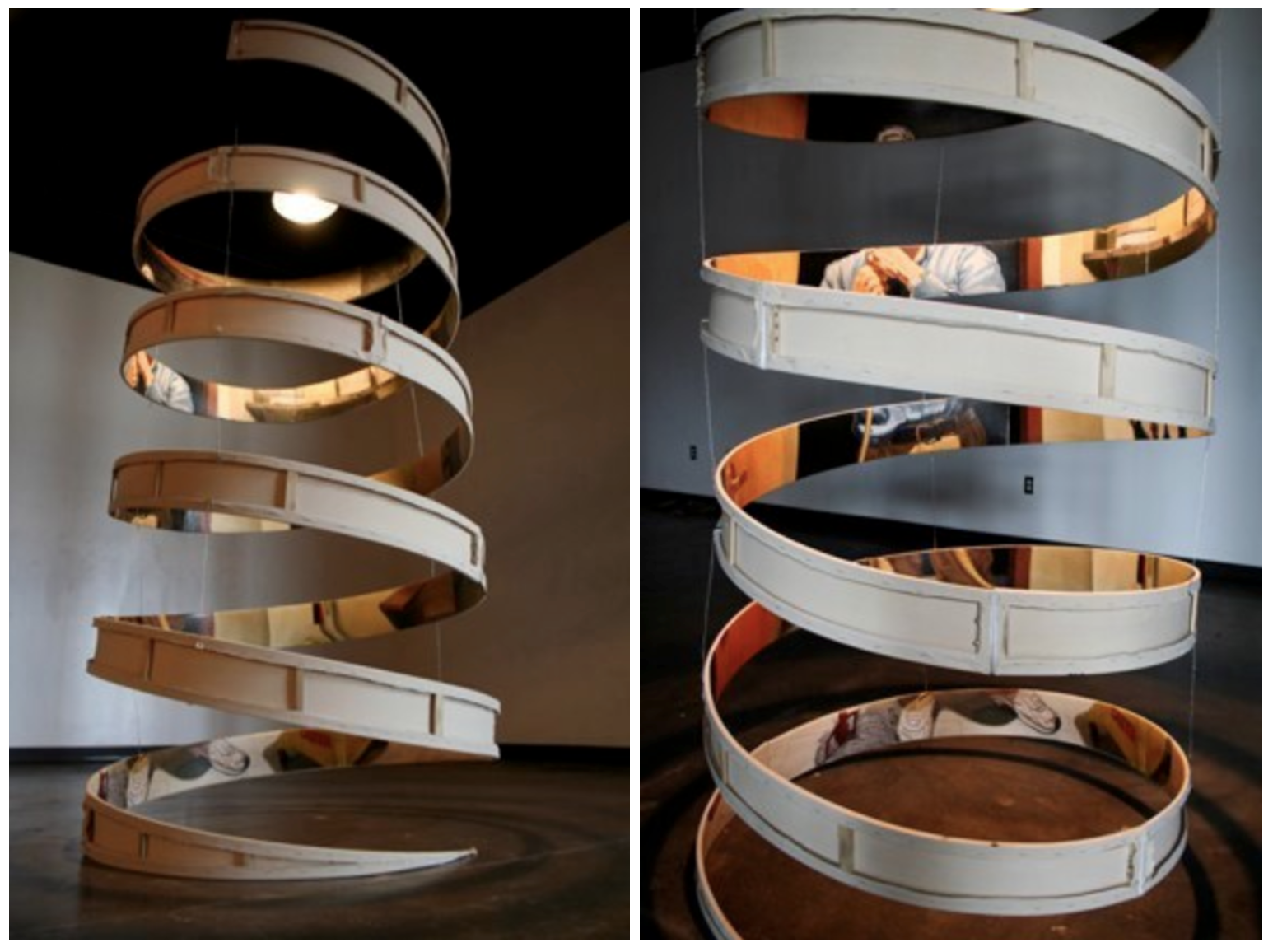 David Chapman Lindsay is an innovative artist living and working in Texas. It’s almost hard to capture the beauty of his work in this two-dimensional vantage. His work has been exhibited all over the United States and in Italy, Germany, and Romania. He says of his work, “My work has developed to focus on the interaction between painted images of the human form and the structured surfaces upon which the figures are depicted. The architectural space of the canvas is used as a metaphor for those cultural, social, religious, etc. influences that manipulate the way we perceive ourselves and others. This structure also coaxes the viewer into a dance with the imagery, a dance in which the imagery is understood not just by the eyes, but also by the body; moving in space around the painting.” 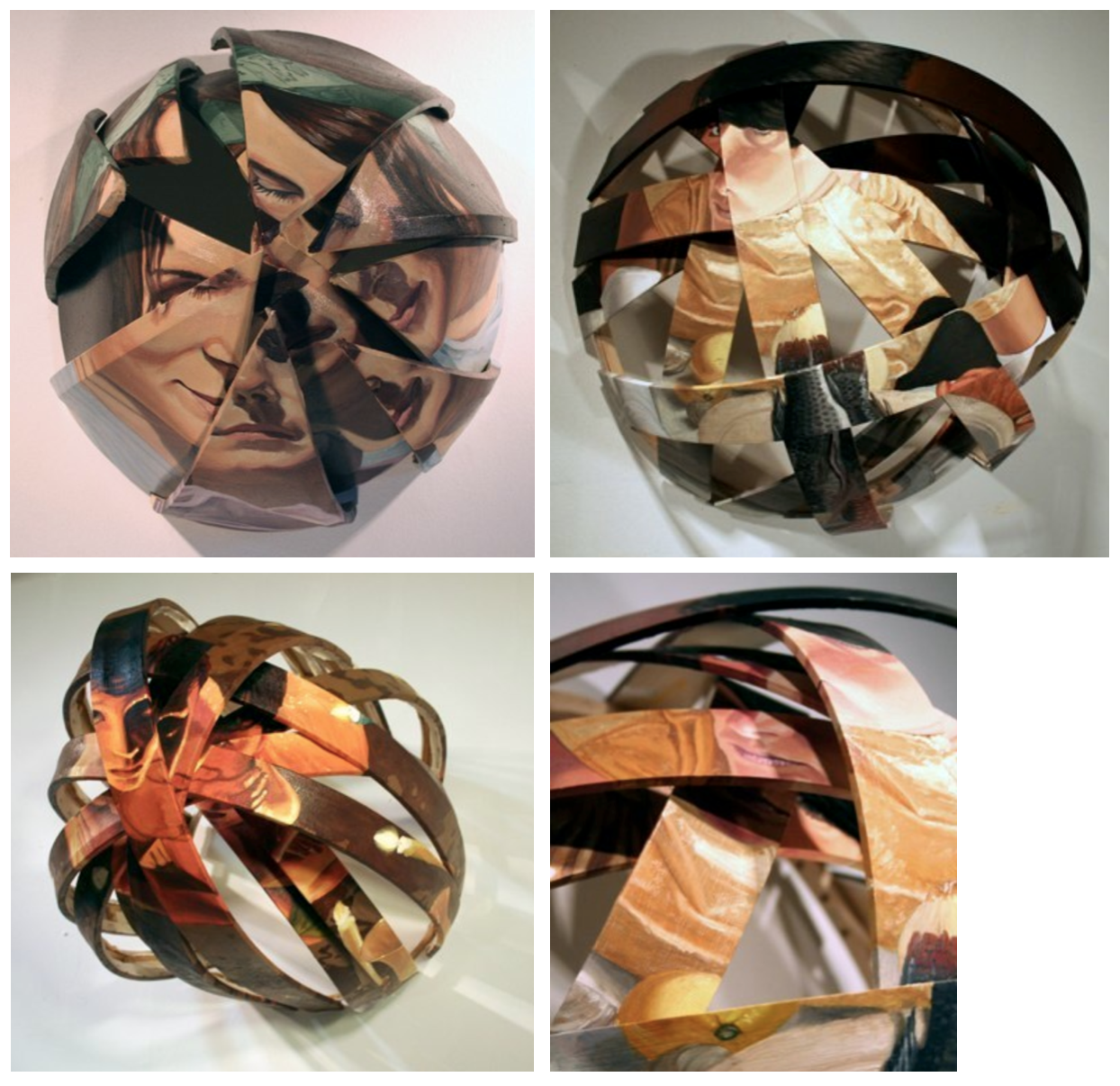 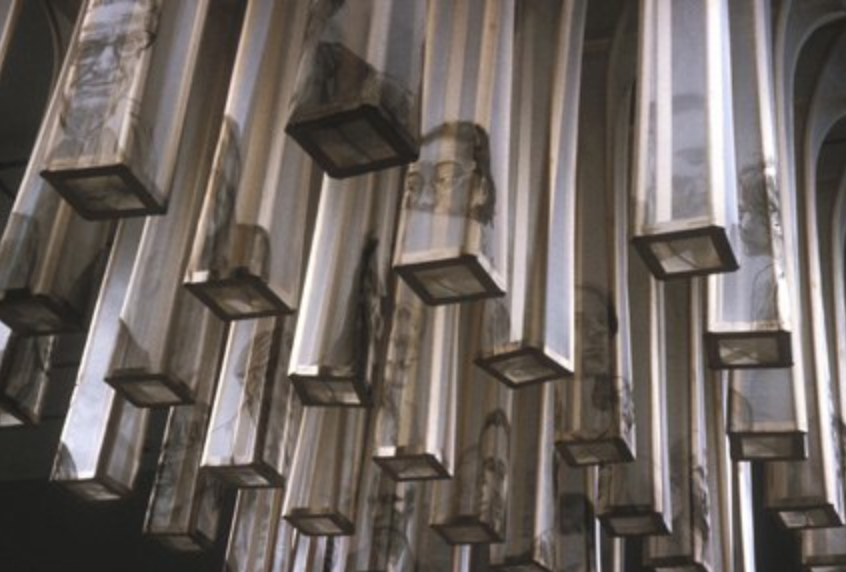 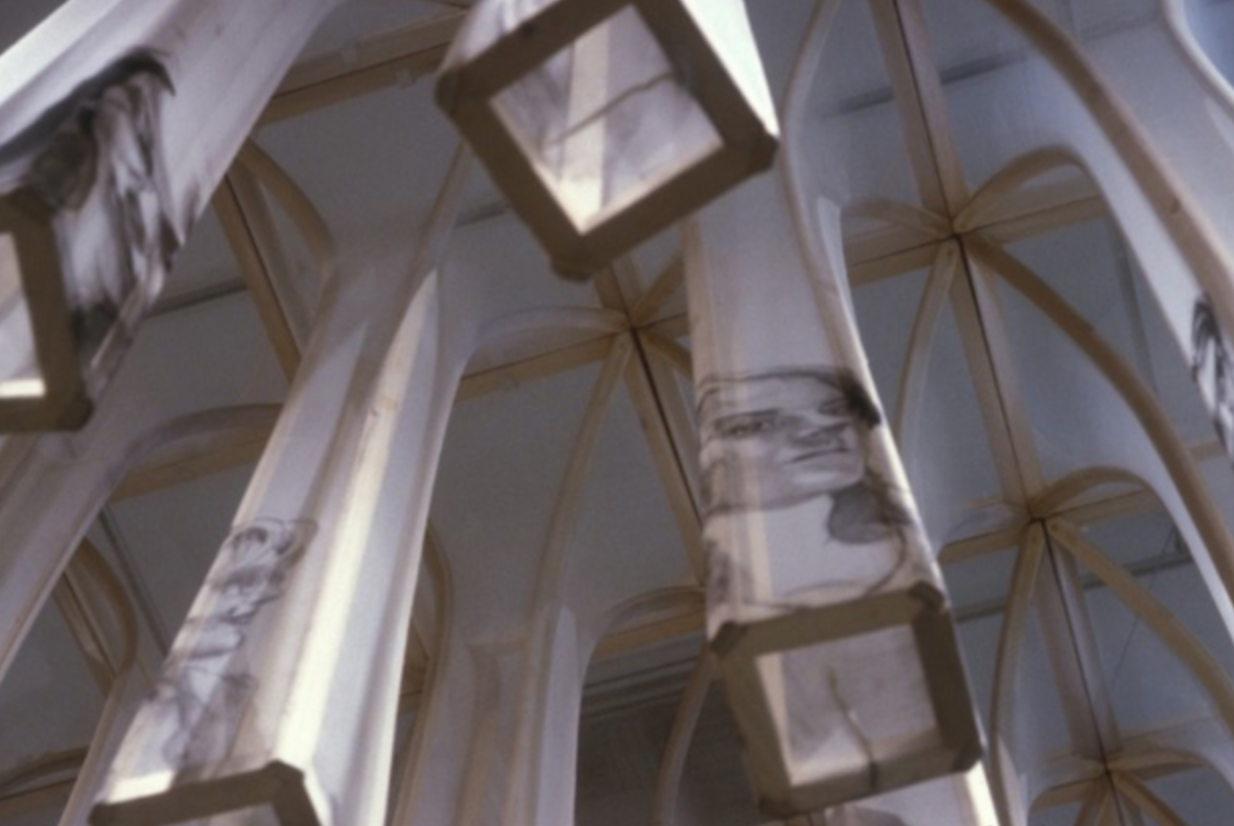 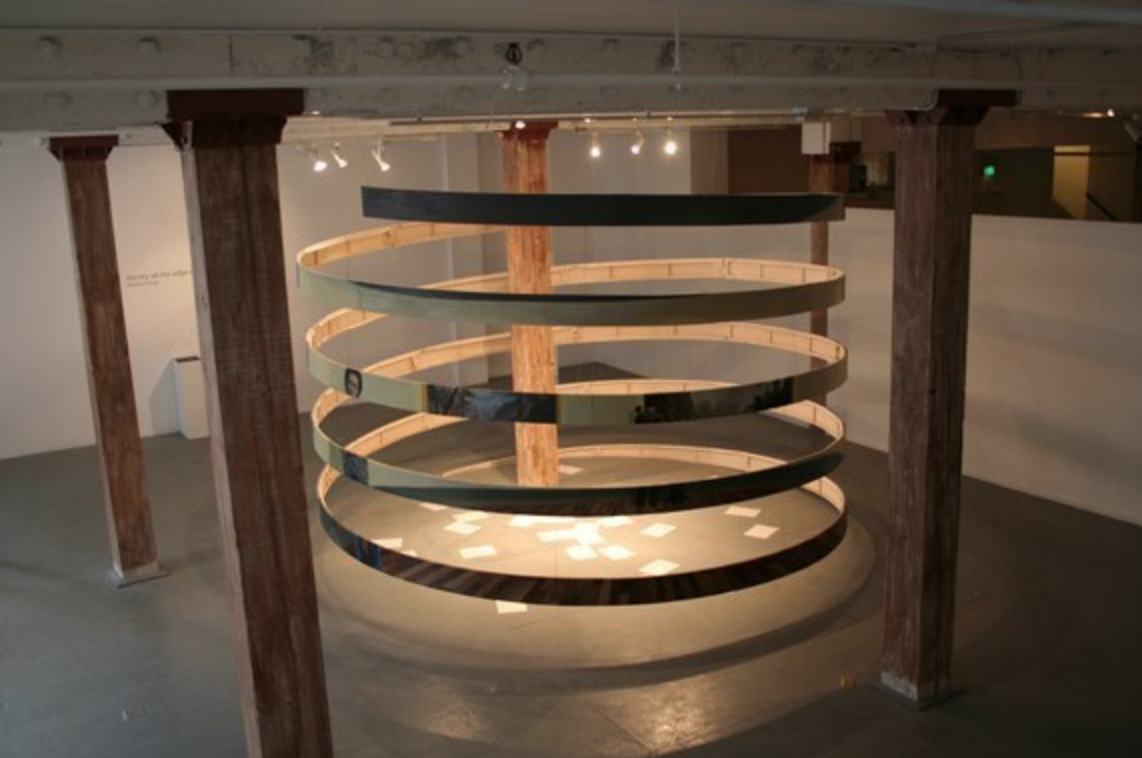 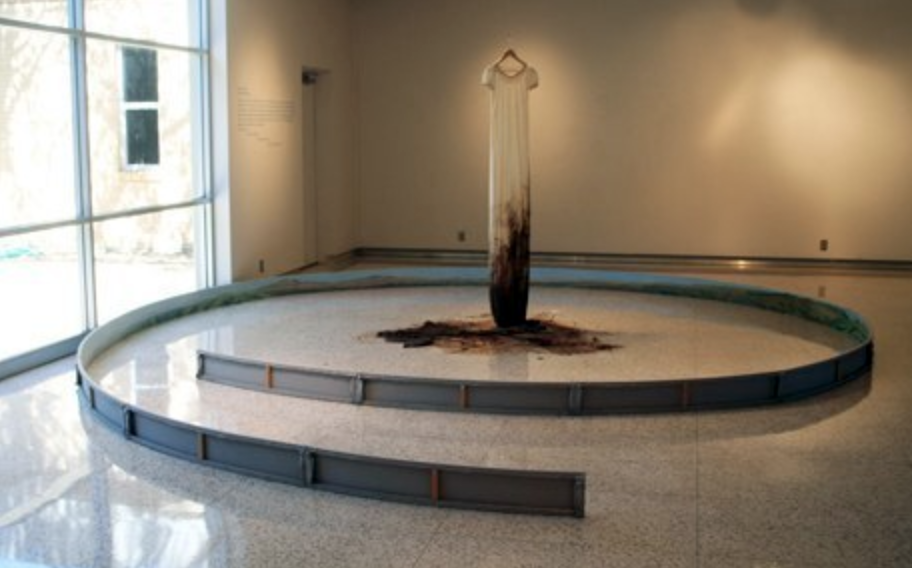 Tell us about your career as an artist. When I finished my undergraduate degree at Utah State University, I was married and had one child. We went to live with my in-laws in California while we figured out what to do next. This was a couple of years before the “Internet bubble” burst and with my meager computer design skills I was able to get interviews with companies looking for designers. Every time I would go to one of these, my wife would stay home and pray that I did not get the job. She did not tell me that until much later. I would paint in the evenings and started to get into a few exhibits (again, thanks to my wife) and a number of commissions. We decided (with lots of prayer) that we would move up to the Pacific Northwest. My uncle lives in Portland and said that we could take a corner of his downtown warehouse to use as a studio. This was in 2000, and Portland was an amazing place to be as an artist. It must have been one of the most vibrant art scenes in the country then (it is still very good). We made a lot of art, starved a lot, said a lot more prayer, had another child, picked a lot of blackberries, and after two years went to graduate school. By then I had five solo exhibits, three gallery relationships, and a lot of debt.

You served a mission in Italy. How much were you able to experience the art and culture of Italy while you were there. Have you been back? I did not have a lot of companions on my mission that wanted to go to the museums on our day off, although one of my companions and I did work as street artists to try to teach the gospel. But you cannot get away from the culture there, why would you want to? It is a part of everything. One of the characteristics of that wonderful place, that the Italians would tell us about, is the fact that the “cities are made to the measure of a man”. We might say that most American cities are made to the measure of an automobile, and that our physical interaction with the city is activated not on foot, but in a car. This stuck to me like glue, and continues to influence my thinking. While an undergraduate student, my wife and I found a deal for tickets to Italy: $900 for both of us and our young son! He had his first birthday there. Gratefully, my employment has allowed my many opportunities to return. Last April I went back to do some research for a book that I am writing. I took that same son (now sixteen) with me. He was telling me how he could stay there and live off earnings as a street performer. Luckily, he did return home with me.

You have said, “the shape of the space that surrounds us can affect the way we perceive ourselves.” Explain.  The Pantheon in Rome is built with interesting geometry. The shape of the space is that of a sphere, whose top is the dome, sides are the walls of the building and the bottom of the sphere is directly in the middle of the floor. When you stand in that place, you can feel space around you. It is like a living force that you become aware of in that building. It is ironic that just outside of that temple, the medieval city is claustrophobic. I love the dichotomy of an enclosed, claustrophobic exterior space and a vast, open interior space.

Being in a place where the architecture speaks so directly to the body: how we move around the space, how we feel in the place; that really was the seed for my work, to try to find a vocabulary to talk about the feeling of a space, and how it bends who we see ourselves as. On a trip to Italy, one of my children, just a year old, found out that the volume of their voice would be greatly increased by the cavernous spaces of the cathedrals. Every time that we entered into one he would start to shout. This was not a cry, but a deliberate attempt to hear the echo of his own voice in those big churches. It was comical and difficult to deal with, but it was interesting to see how that small child felt empowered by the space that he was in. At that young age, he was able to identify what kind of building would create the echo.

Tell us about teaching at Texas Tech. What are your students like. How is the art community? Lubbock is not beautiful. But I get to brag to my artist friends living in big cities that the two resources that Lubbock has plenty of are time and space. For an artist, those are precious commodities. There is a wonderful community here, the University adds a lot of flavor to the city, West Texans are some of the kindest people anywhere, we have a temple, and an art scene that attracts 3-4,000 people at the openings every month.