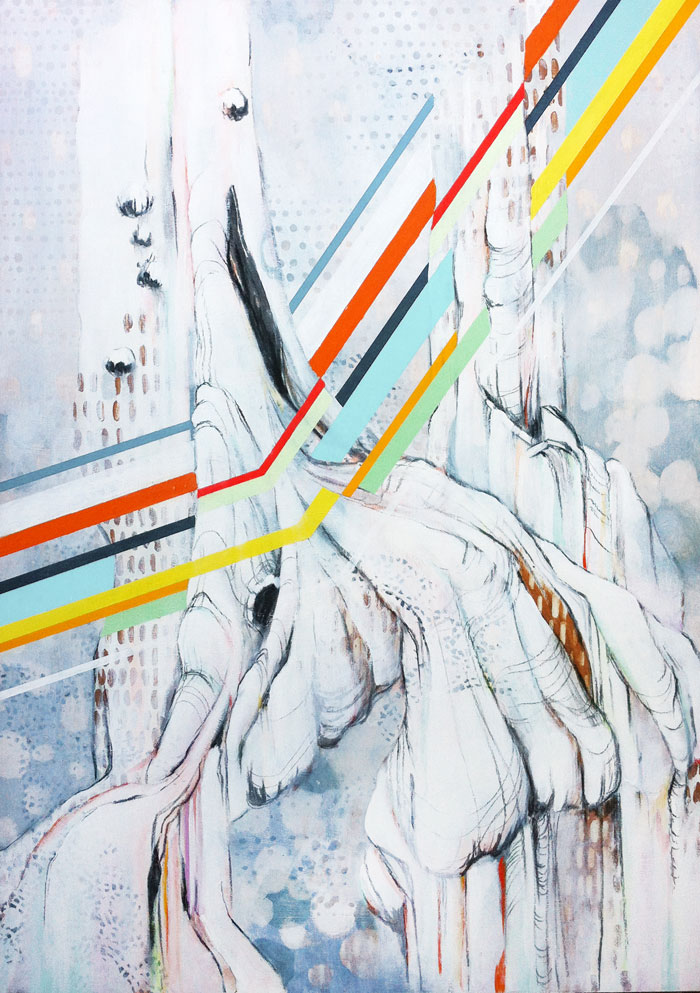 Denise Gasser is a mixed-media artist with a new collection called Stanley Park based on a popular park in her current home of Vancouver, British Columbia. Gasser explains, “With a contrast of soft organic layers and bold geometric accents, I capture the amazing intersection of deeply rooted wilderness and vibrant urban activity that puts Stanley Park among the top urban parks in the world. These trees are a steadfast, immovable link to the past, offering perspective and stability to the ever-changing present.” She was profiled previously on The Krakens for her series Tree Portraiture. 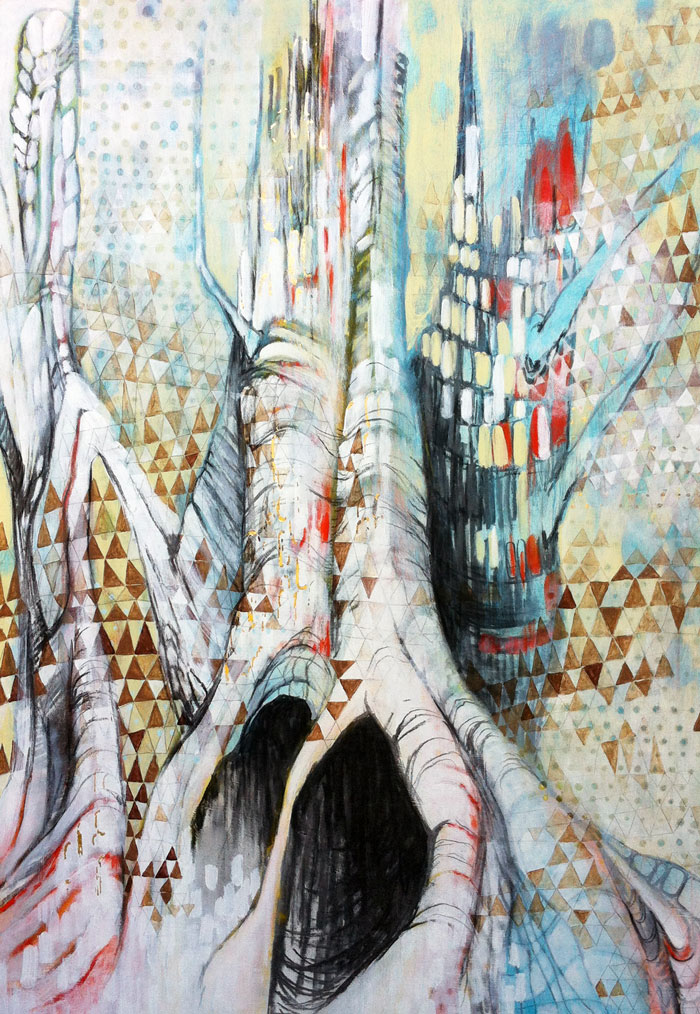 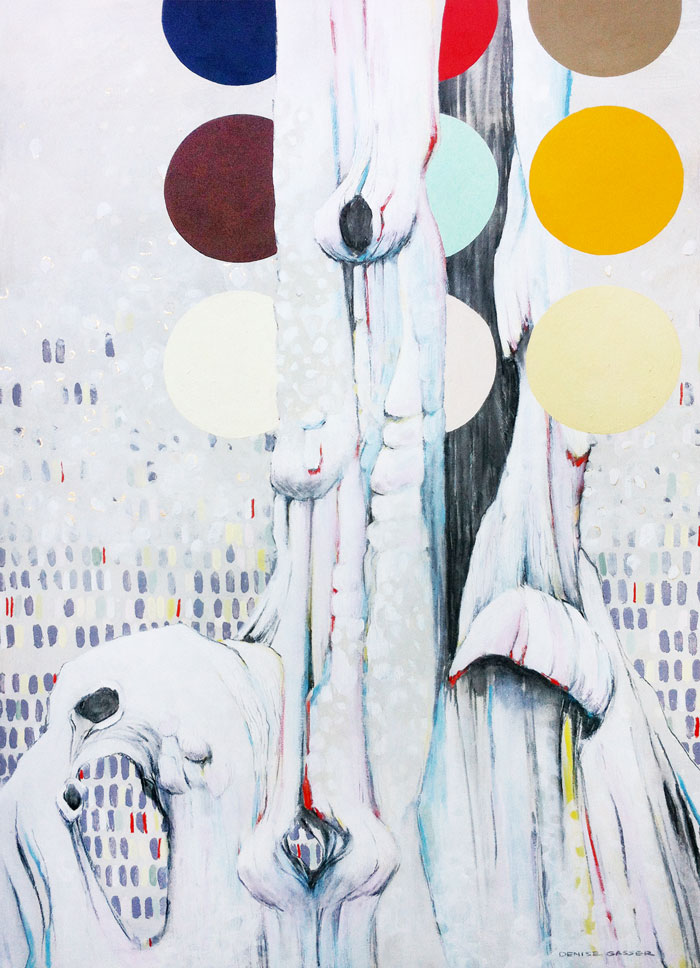 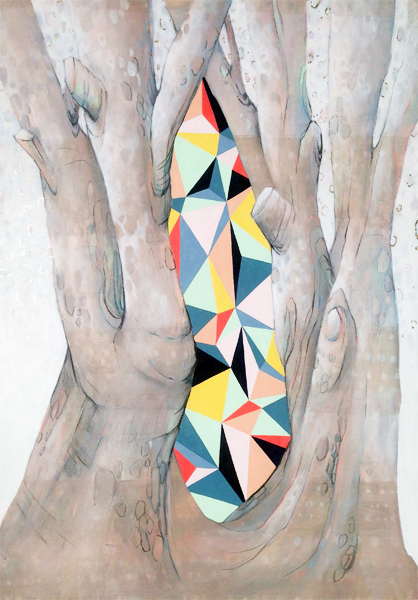 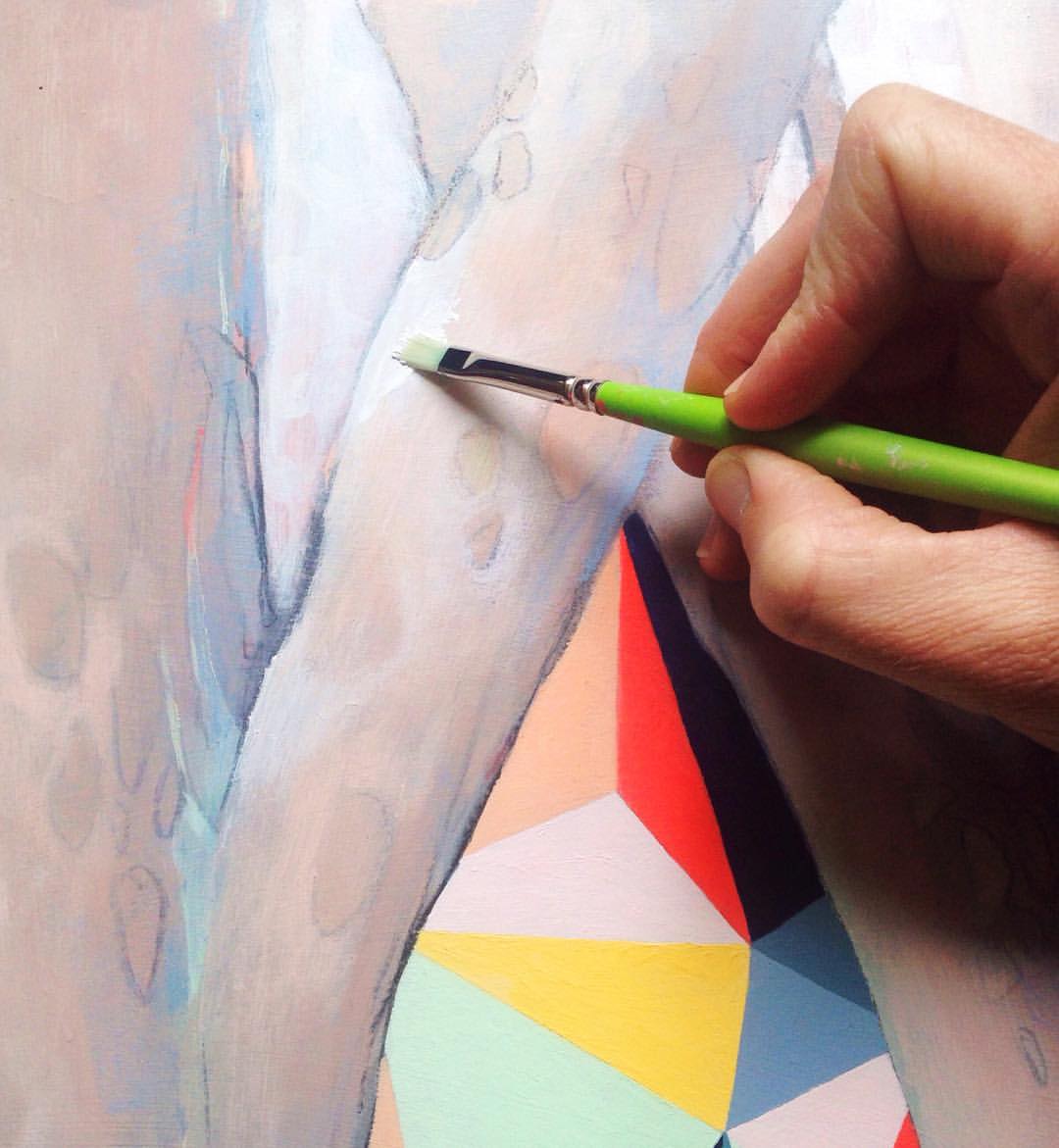 Tell us about Stanley Park. I’m working on a series based on the amazing urban park here in Vancouver, British Columbia called Stanley Park. This park has been a sort of refuge for me since I moved to Vancouver. Whenever I’m missing family, or feeling outraged by the gray skies, or wondering why I’m living in one of the world’s most expensive cities…I go to Stanley Park. The incredible vistas of sea and sky, the vibrant energy of the people, and the towering trees wash over me like a calming breeze, and I breathe it in as deeply as I can, hoping it will last. It always reminds me how fortunate I am to be in this incredible part of the world. Trees are an obvious passion of mine, so starting this series seemed like the most natural thing in the world. But in these pieces I am really pushing the contrast of soft organic images paired with very strong, bright, geometric elements. This pairing really conveys the intersection of deeply rooted wilderness and vibrant urban activity that makes Stanley Park so unique.

You have said, ‘Genuine pursuit of beauty that drives me forward and compels me to create’. Explain. I really want to create beautiful experiences for people. When I come across a work of art that speaks to me, my chest tightens, the world stops, and I feel an acute awareness of that particular moment in time. I know that sounds cheesy but its true! I have felt this so many times, brought on by anything from a giant Rothko in a museum, to simple things, like watching thin layers of paint seep through a paper towel. Each time I experience this it leaves me with a renewed vigor to create similar experiences for other people. Art can have so many different agendas…a lot of art these days is overly conceptual, interested more in commentary and shock value than aesthetics or beauty. Its fine…important even, to have concepts and agendas that drive artwork, but I want my art to always be grounded in beauty. I try to draw people in, and allow them to experience my work in a way that is meaningful to them, without necessarily forcing any particular idea or experience onto them. 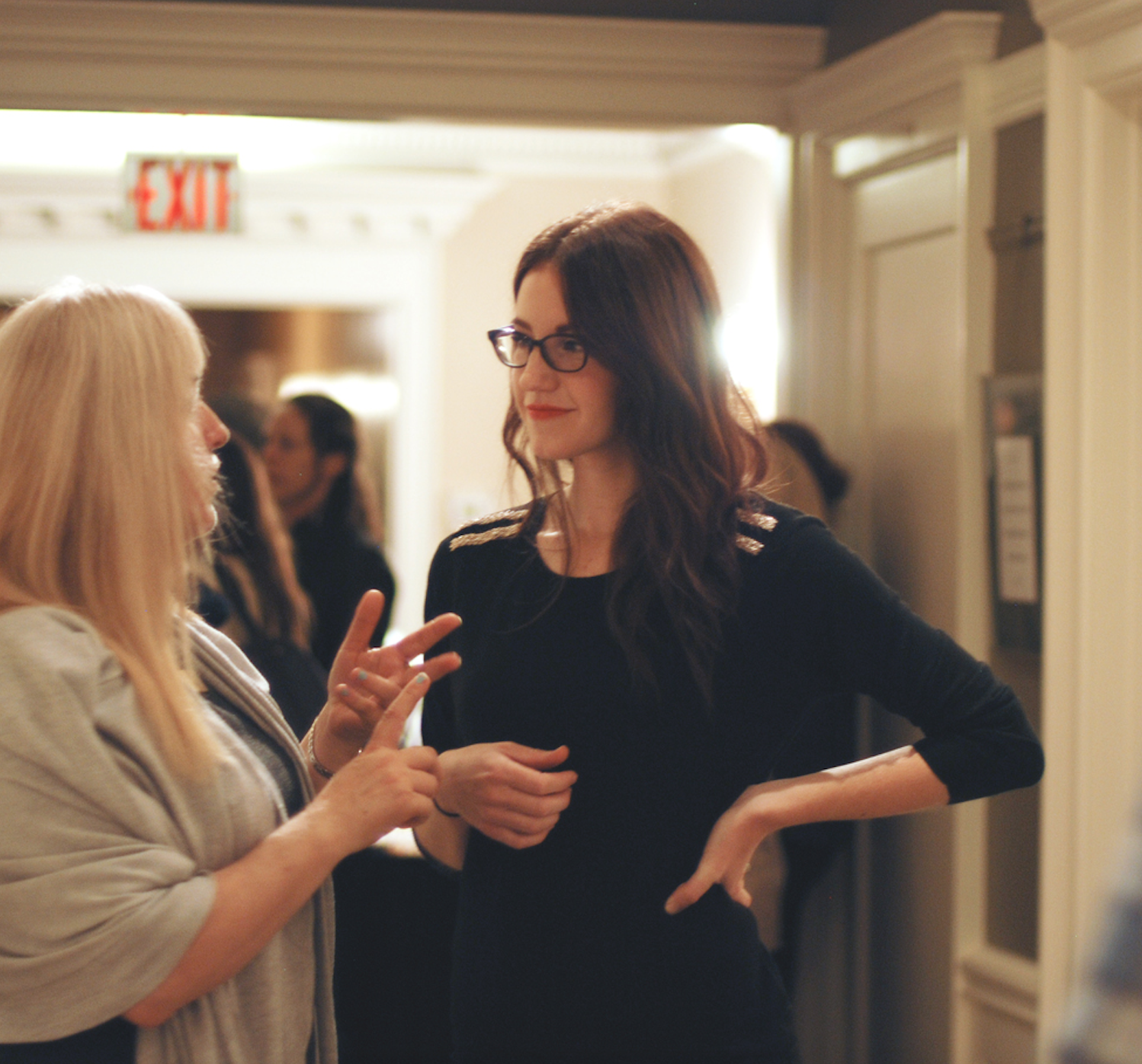 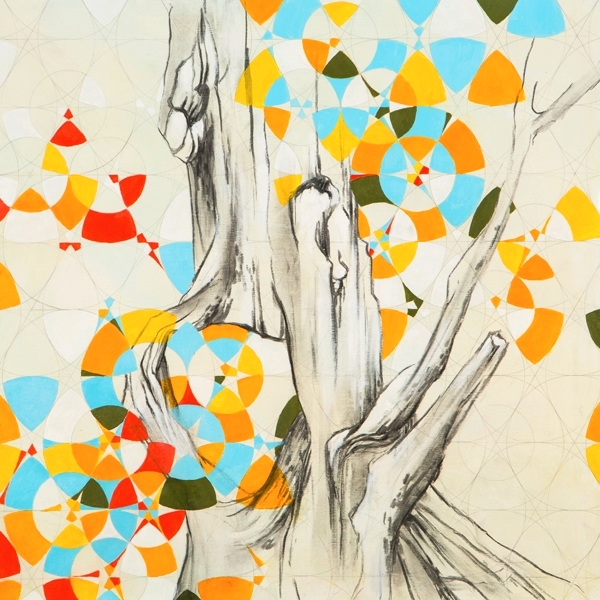 Denise Gasser is a mixed-media artist with a fascinating collection called Tree Portraiture. She lives in Vancouver, British Columbia. 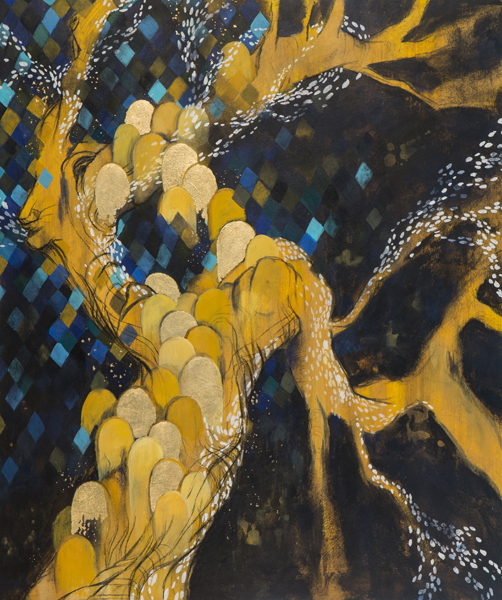 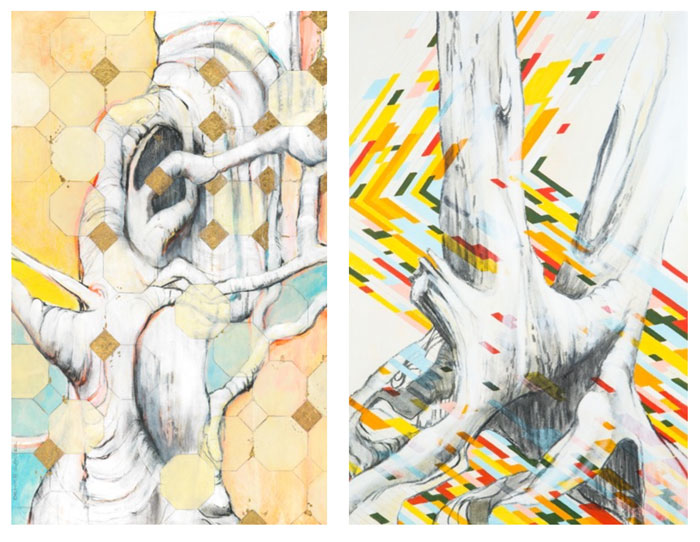 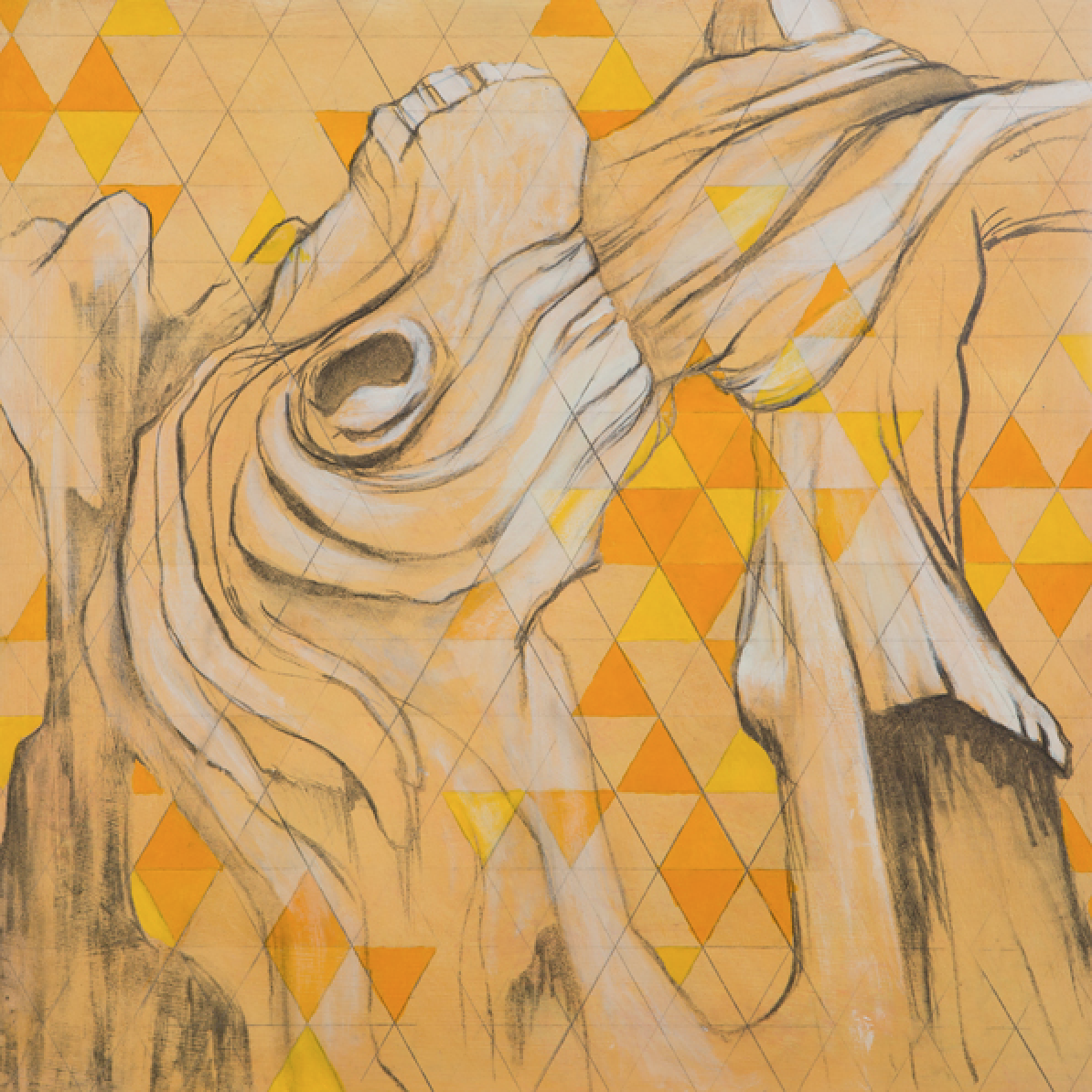 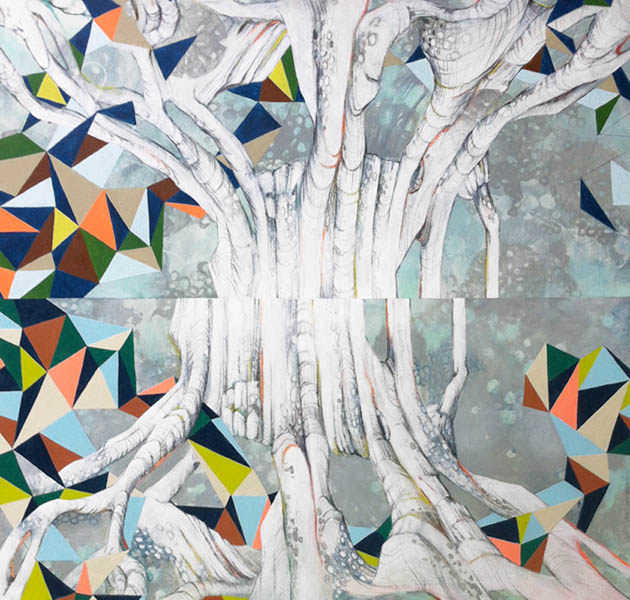 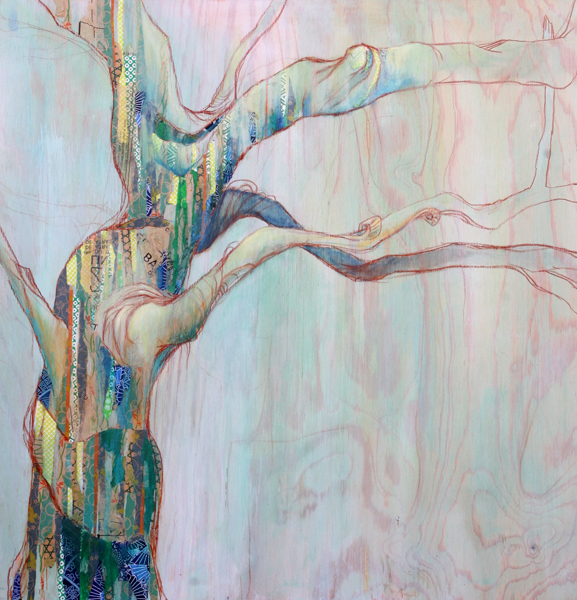 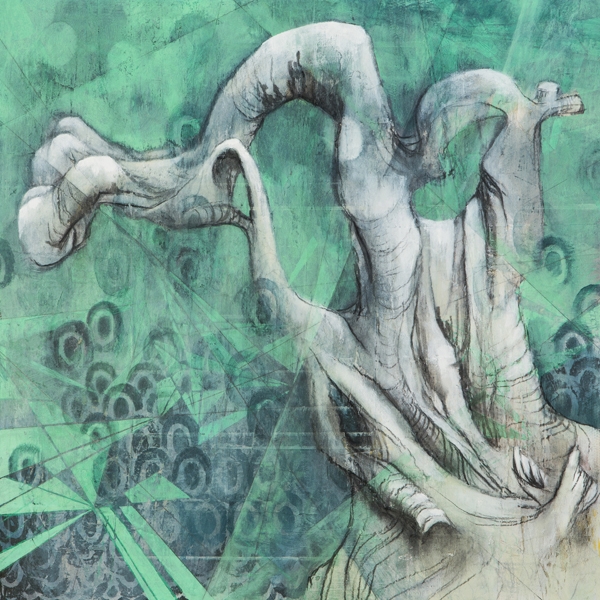 Describe yourself as an artist. I would say that while I am not always consistent, I am absolutely persistent. My lifestyle and personality don’t always allow for really consistent productivity. Sometimes I will go for weeks without picking up a paintbrush, and sometimes I will paint every single day for months. I will get random bursts of inspiration and stay up all night working. Other times painting sounds like the worst thing in the world and I wish I could just read or watch TV guilt-free; it’s kind of a complicated relationship. I also have a hard time sticking to one subject matter or style. I get inspired by so many different things, so it’s hard to make myself hone in on one thing at a time. So I have been categorizing my work into a few specific series, and I’m forcing myself to at least stick to those for now. Despite the challenges of being an artist, it’s who I am; I wouldn’t be me without it. I decided a long time ago that it’s worth the struggle, so I’m in it for the long haul…sometimes inching along, sometimes sprinting…but I’m in it.

What do you think about art within the Mormon culture? When I think of ‘Mormon art’ my mind immediately recalls soft, glowing images of Christ with flowers and sunsets, or the super-muscular Nephi paintings that accompany the illustrated version of the Book of Mormon. I’m guessing a lot of Mormons would have the same reaction…likely because these are the overtly Mormon images that we all grew up with. Though these works are beautiful and important, I think we are really limiting ourselves if we allow these few images to typify our entire view of Mormon art. Mormons are a creative people with a rich history in art, architecture, music, and dance, emphasizing beauty, quality, and craftsmanship. This tradition is still thriving in the Mormon community today, with artwork that is incredibly expansive and diverse. Just off the top of my head I can think of at least a dozen Mormon artists who are doing amazingly innovative work. I think we just need to expand our definition of ‘Mormon art’ to include ‘art created by Mormons’. Even if the artwork itself isn’t specifically Mormon, there are common threads of belief that bind Mormon artist together, and likely weave their way into everything they create. Allowing for a broader definition of what constitutes Mormon art would hopefully encourage us to take pride in the incredible talent that is harbored within the Mormon culture.

What are you working on next? Right now I’m putting most of my creative energy into two major projects. This is me honing in! After all that talk about simple beauty…I am actually working on a more conceptual series called Art After. It’s been an ongoing project that attempts to harness the tension and ambivalence that exists in my roles as artist and mother. They are just tiny little pieces, 5×7, and I’m hoping to make about 200. I create each piece in one sitting, working without stopping until I am either finished, or until I am interrupted. Usually I end up stopping at the point that I literally can’t continue working through the interruptions. At that point I have to stop working, and I can’t go back and finish. For each piece I am documenting the start time, the end time, and the nature of the interruption that forced me to stop. So some pieces last about two minutes, and others last over two hours. It’s been a really nice way to integrate art and motherhood, and to comment on the extremely challenging aspects of continuing to make art after becoming a mother. The other project I’m working on is a series based on the amazing urban park here in Vancouver BC, called Stanley Park. 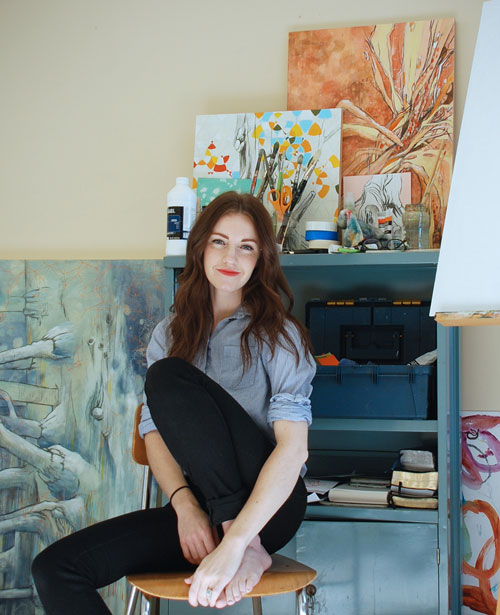