Karl Hale is an innovative sculptor working on kinetic marble runs made of wood and other projects. One Eternal Round was his first major sculpture. Hale was profiled previously on The Krakens for his piece Stories of Jesus. He lives in Mapleton, Utah with his wife and three kids. 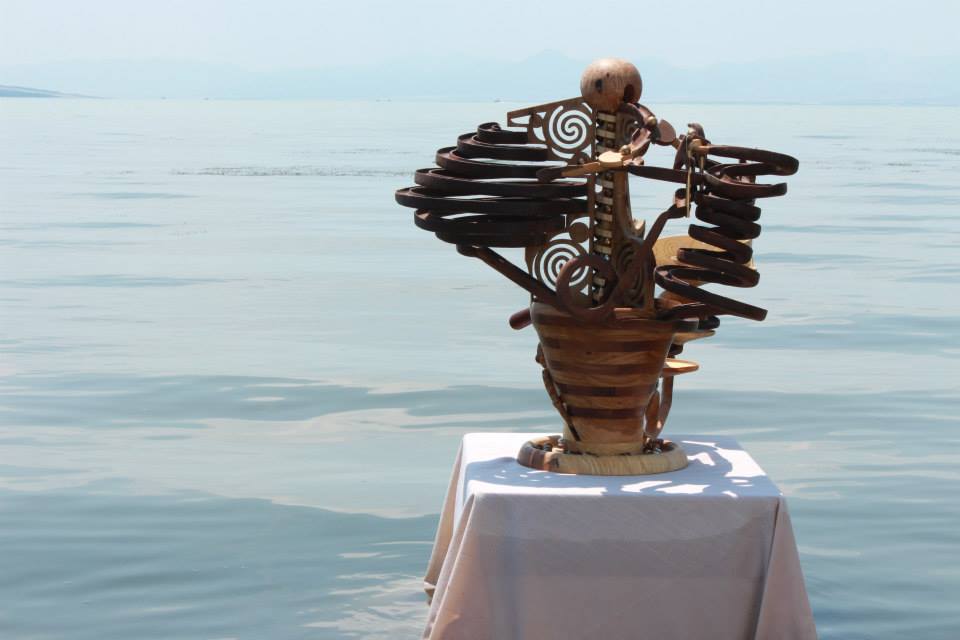 What has been the reception to your pieces? Much better than I expected. When I began this journey, I was not looking to make art. I wanted to make something pretty, but I wasn’t thinking of it as art. I’d never thought of myself as an artist. Then my good friend, veteran sculptor and art teacher, Robert Fitt reviewed my first significant attempt and, looking me squarely in the eyes, said, “Karl, you are a true artist.” I was thrilled but sincerely surprised. I felt like that kid who grew up an orphan on the streets, and then one day discovered he was a member of the royal family. I felt like I’d come home to a place I never dreamed I’d have a right to call home.

So with that and similar encouragement from other artistically inclined friends, I pushed it further. I’ve since been honored with Best in my division and People’s Choice awards at two regional woodcarving shows, have had two pieces accepted into juried exhibits at the Springville Museum of Art and have another piece currently at the LDS Church History Museum.. But most satisfying is the attention my art receives from significantly divergent groups. I’ll always remember walking into my living room to find my 70+ year-old dad and my 4 year-old son both mesmerized by one of my pieces.

What’s next? I have several dozen sketches for sculptures, some of which are more complex and some of which are less. I’d really like my art to find its way into homes but because it doesn’t lend itself to reproduction (can’t make prints or casts of it) I need to make sure I have pieces that are affordable for families, which means simpler in design and fabrication. But, on the other end of the spectrum, I’m talking to a museum about a permanent installation that (if it moves forward) would be around 10 feet tall and at least as complex as Stories of Jesus. I’m also working on a line of kinetic, interactive art targeting board rooms and waiting rooms. Not very romantic, but even executives could use an aesthetic lift every once in a while … right? 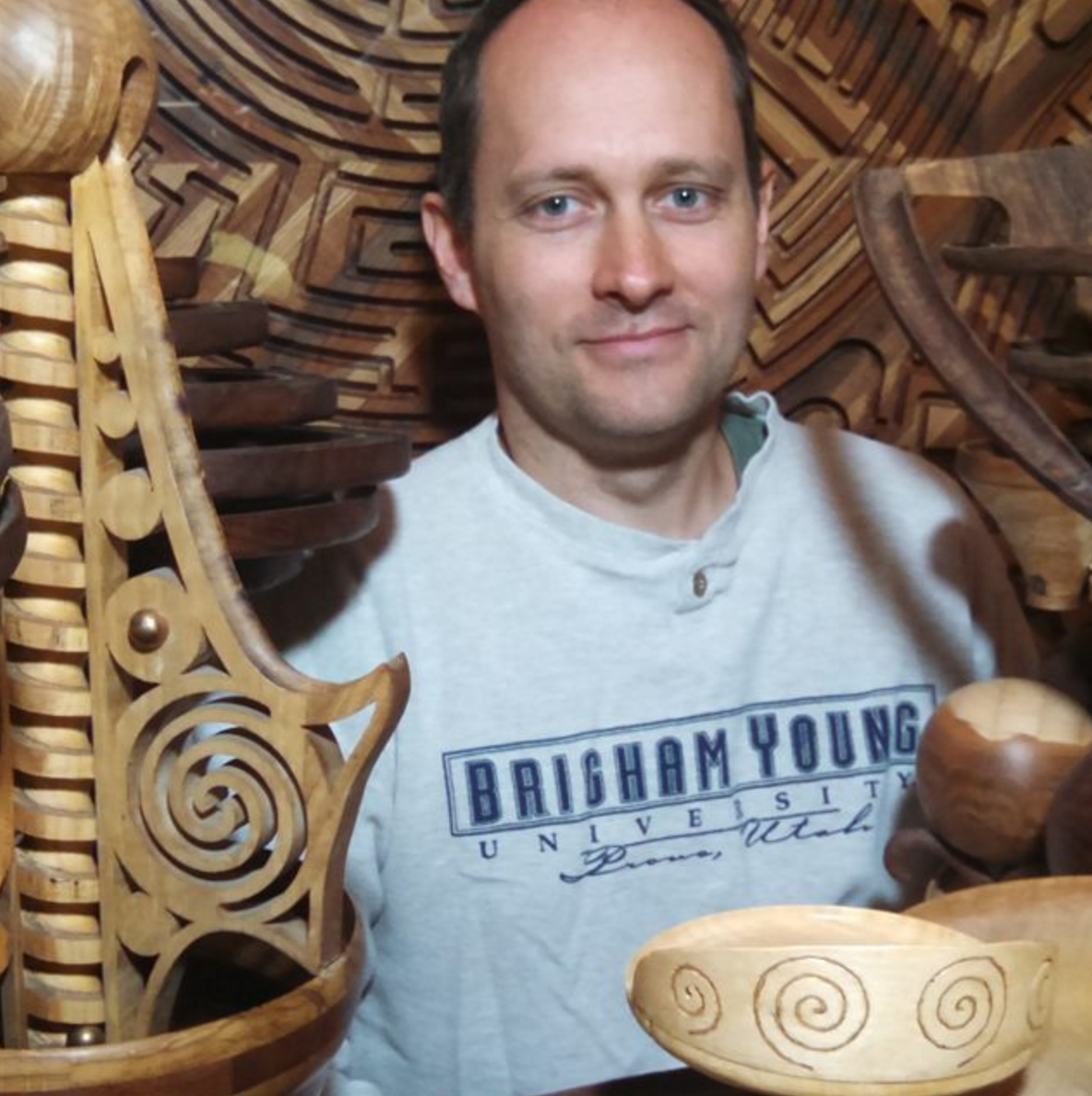 Karl Hale‘s newest creation, Tell Me the Stories of Jesus, is part New Testament sermon, part decadent woodworking, and part Rube Goldberg device. Somehow all those parts add up to something remarkable. Hale has a background in technology and his love of woodworking combined for a unique type of sculpture he calls ‘kinetic metaphor’. It is a sprawling marble run that conveys nearly 20 scriptural stories of Jesus and took Hale more than 1,100 hours to create. 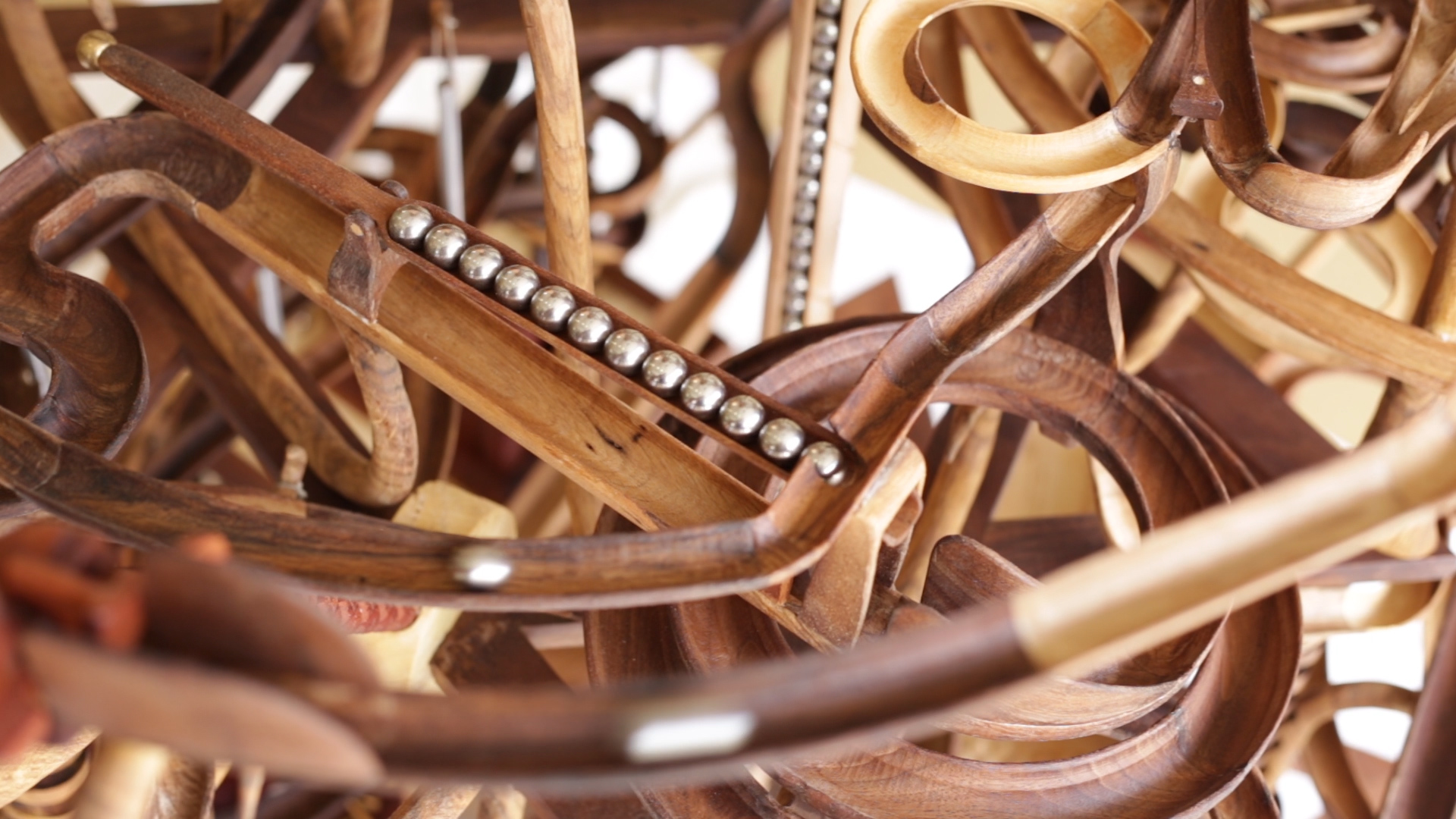 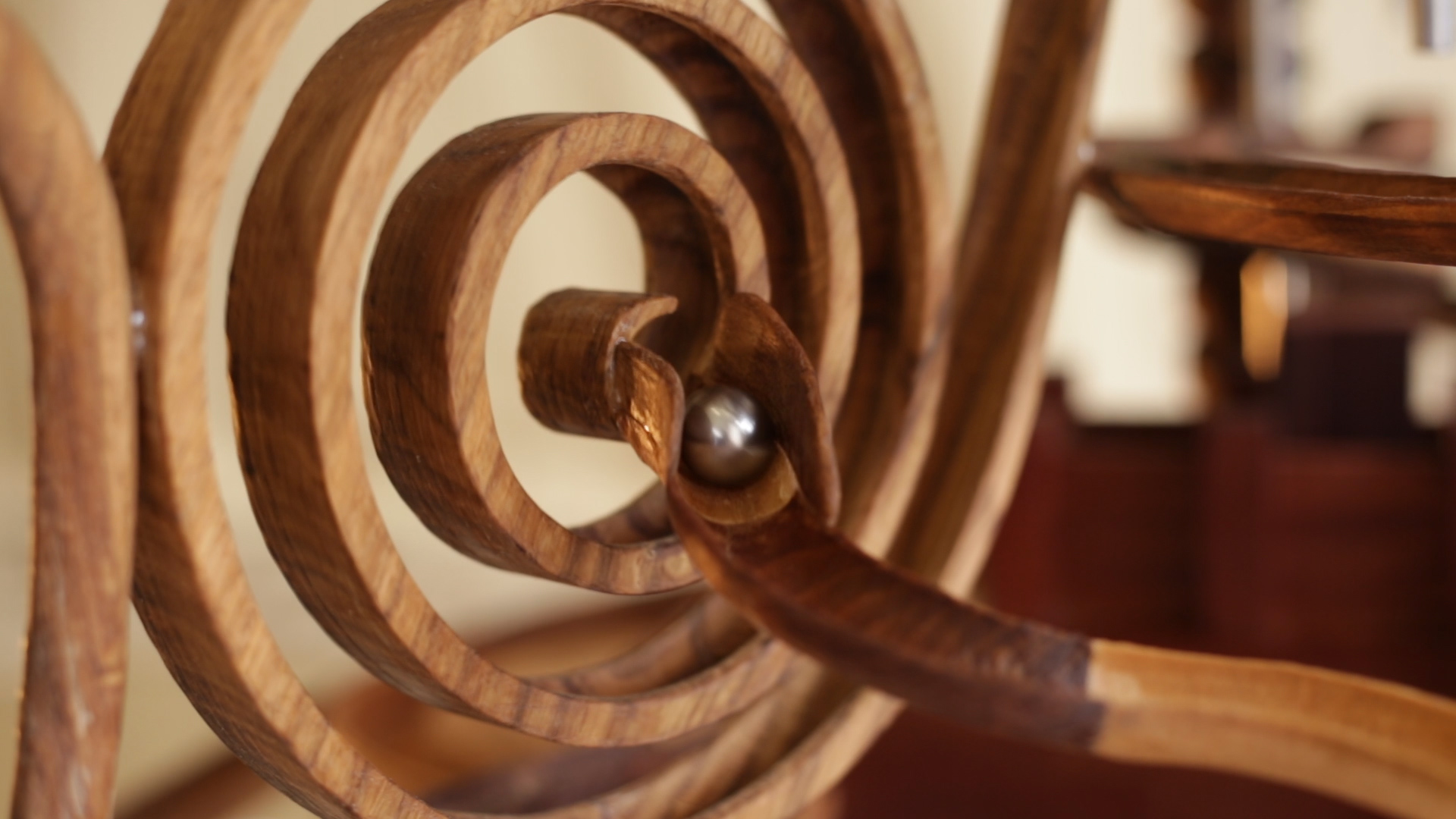 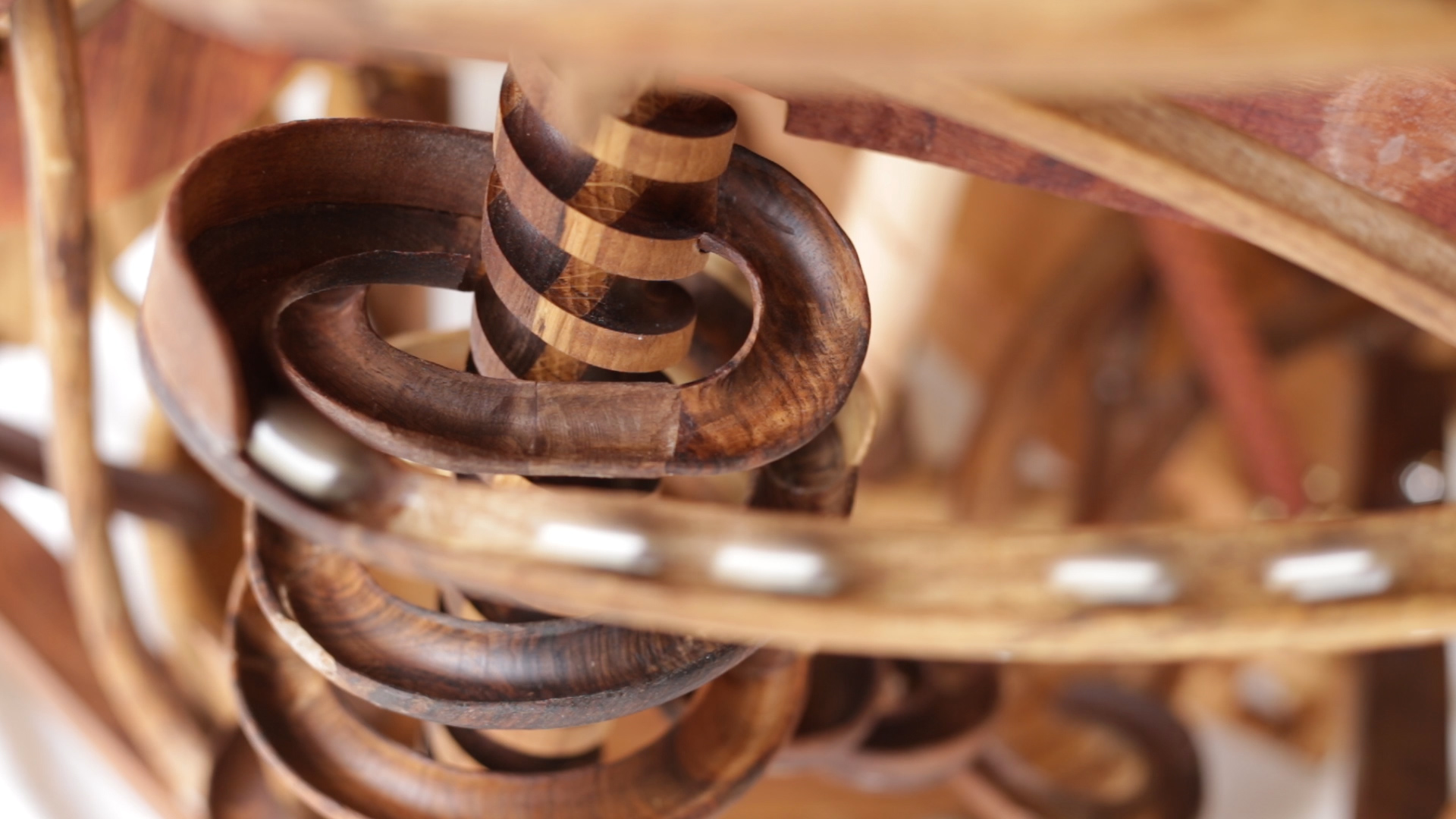 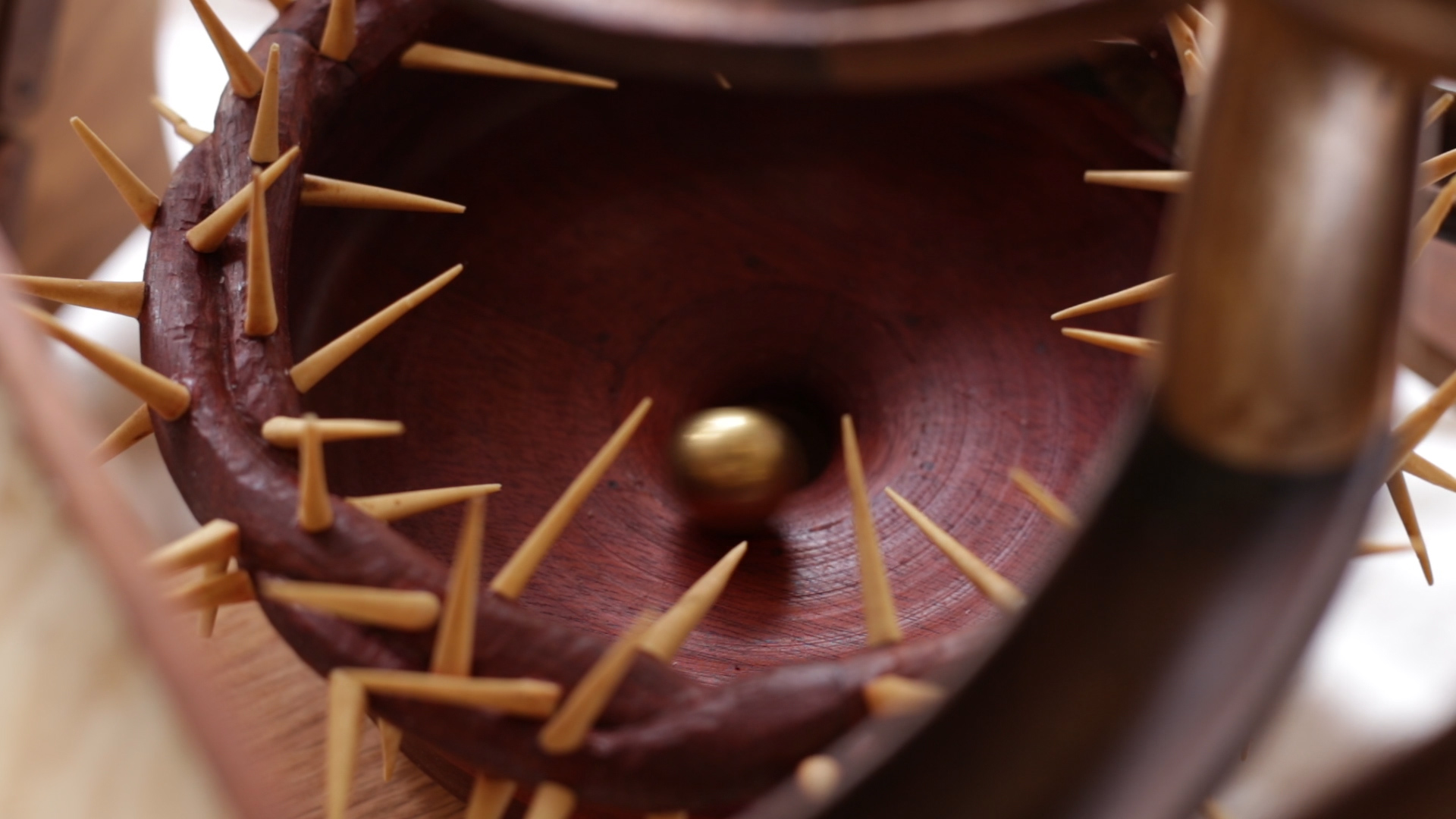 You found art later in your career. I was 42 and had given two decades of my misspent youth to the business world before making my first piece of art. But even woodworking didn’t come to me until I had three kids and a budding tech career. What really led me to the art was a fascination I have with the intersection of things that don’t seem like they should intersect: particularly, left-brain, analytical thinking and right-brain, aesthetic thinking. In January of 2014 I was in serious need of a stress reliever from a painful job situation and so I decided to prove to myself that I could pull off a significant project that had no “useful” objective. A love of wood, some skill in highlighting the beauty God puts in the tree, and a fascination with marble runs were the ingredients for my frivolous project. My goal: produce a piece that would appeal to both analytically and aesthetically inclined people.

Break down the time investment to each stage of Tell Me the Stories of Jesus. Quick answer: no clue. Attempt at a useful answer: I spent several weeks with ideas knocking around in my head for Tell Me the Stories of Jesus and then probably about 40 hours sketching (on paper and in the application SketchUp). But the bulk of the roughly 1,100 hours spent on the piece was a back-and-forth process of prototyping and fabrication which is difficult to divide into chunks of time. Because my art has to be mechanically functional as well as aesthetically interesting, I usually spend a lot of time working on those mechanics. For example, Cleansing the Temple (one piece of Stories of Jesus) required four prototypes before I got the Money Changer marbles to seat themselves properly and still allow themselves to be kicked out of their market stalls by the Jesus marble. I probably spent 40-60 hours on that piece alone. Other pieces take a good bit of computer engineering time before I get to make any sawdust. For example, the three spiral posts required me to write custom code for my CNC to get the right trough slope, exits, and cutting-bit depths. I probably spent 20 hours just on the computer for those posts and then 10 hours cutting, gluing, sanding, and shaping.

And then there are the pieces that don’t make it into the final. My original design had a large star as the capstone of the piece to which Jesus ascends and from which he condescends. It had six two-foot long, geometrically intricate radiating arms and a complex mechanism for receiving, hiding, and delivering Jesus. However, when I placed it on top of the sculpture I knew it to be an aesthetic abomination. The visual reality was very different from what my computer sketching and imagination had foreseen. As my 20-year old son said, it looked like the crown of Sauron of Lord of the Rings infamy. I estimate that I spent 16 hours and $100 in wood on that little project. Its broken majesty is now in my burn pile.

Once my sculptures appear complete, I have to tune them. Everything looks right and all the balls go where they’re supposed to 80% of the time, but then I try to increase that percentage closer to 99%. This tuning seems to take about 10-20% of the total time for my sculptures because I have to redesign the part that is causing the difficulty until it works flawlessly. In the case of Stories of Jesus I’ve spent about 150 hours tuning so far and would like to spend another 20-40.

Are you interested in other mediums now? Somewhat. I have created one prototype sculpture out of synthetic material as I explore outdoor installations and I recently started sketching some ideas for a leaded and stained glass piece. One of my focuses has become attracting people to art who wouldn’t otherwise be interested (e.g. analytical types and children/teenagers). Kinetic art, particularly rolling ball sculpture, seems to work well with that, so my art will likely remain in that category. Also, people like to get involved with the art, so most of my art will probably continue to be interactive. Finally, I like letting God do the heavy lifting in the material preparation leaving me to just form it a bit, so I’m pretty sure the majority of my art will be in wood. 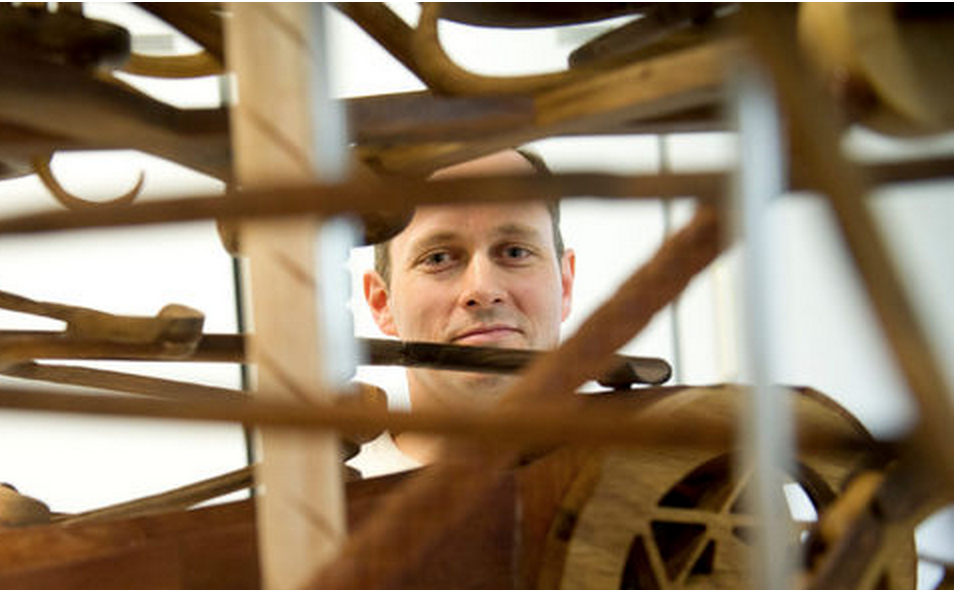