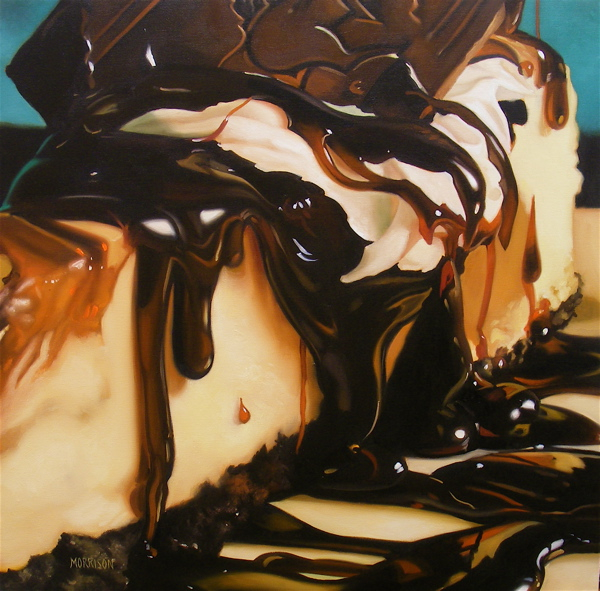 Margaret Morrison is a master with two new intriguing series. She has been described as, “Best known for her detailed still-life and surreal figurative paintings, Morrison’s figurative imagery is expertly lit to invoke a foreshadowing element to the composition. Developing her still-life palette from a more muted tone to the brilliant colors seen today, Morrison’s super real, larger-than-life paintings of food, for example, are good enough to taste!” Morrison lives and paints in Athens, Georgia. She is an Associate Professor of drawing and painting at the Lamar Dodd School of Art at the University of Georgia. She was profiled previously on The Krakens for her series Larger than Life and Child’s Play. 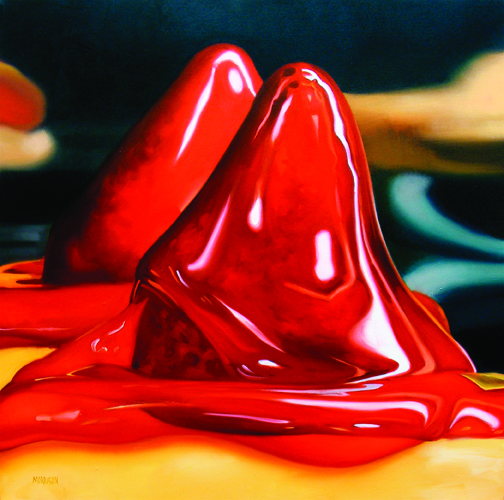 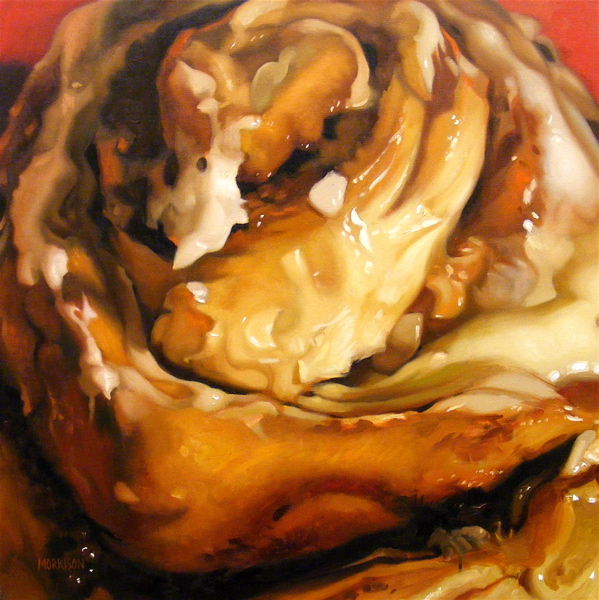 She created a series of oil paintings called Both Ways (below) that addresses all that time we spend in our cars. 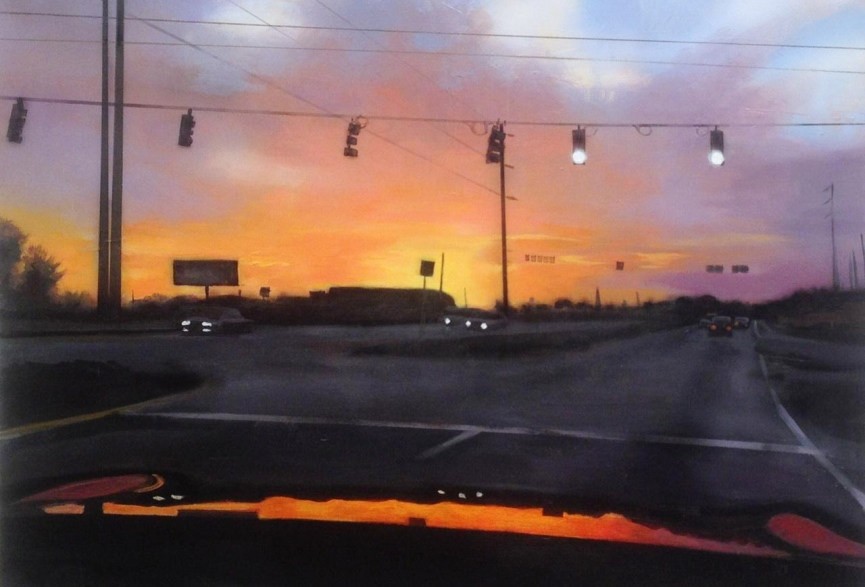 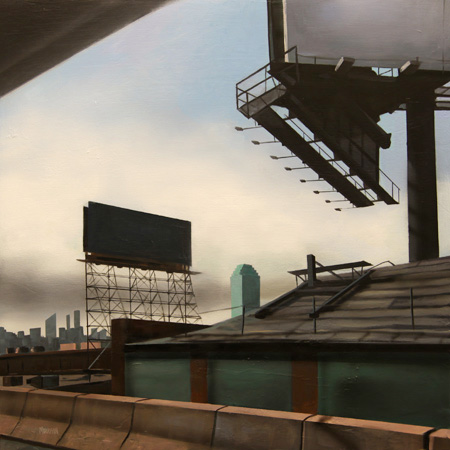 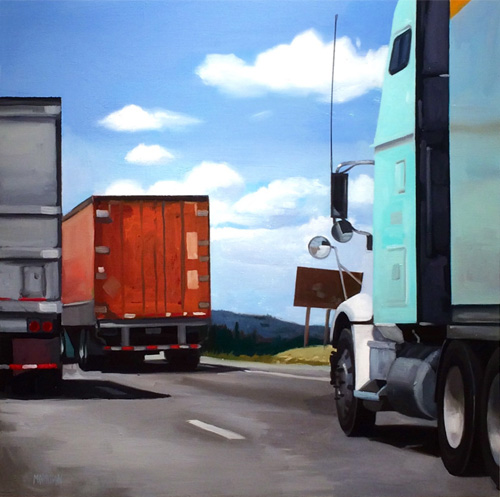 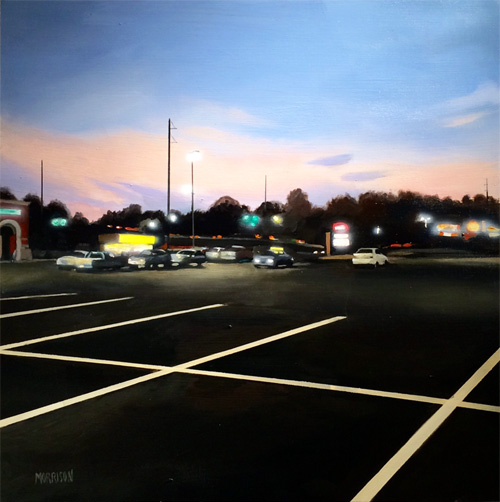 You once said you like to ‘cast old symbols in contemporary language’. What is the language in your exhibit Both Ways? In my series Patron Saints I portrayed some of the patron saints of Catholicism after researching their stories and attributes. I was intrigued with the idea of painting time-honored subject matter and symbols with models who were wearing contemporary clothing in a modern setting.

With Both Ways I was ‘casting’ the older, time-honored tradition of landscape painting in a new and very personal way. I think that this work came about because both my parents passed away recently and found myself looking backward to where I grew up. All of these landscapes are very meaningful to me, an extension of my own sight line. I realized after painting them, that all of them face west.

You teach at the University of Georgia. Does working with students affect what you do in your own studio? I have found that teaching fuels what I do in my studio, and what I do in my studio impacts my teaching; it truly is the perfect balance. I love the constant dialogue, the energy that stems from new conversations and ideas. I’m a better artist when I’m teaching and a better teacher when I’m up to my eyeballs in my studio.

What are you working on next? The field is white. I’m just keeping my eyes open, taking visual notes and have no idea where it’s leading me. That’s part of the adventure. 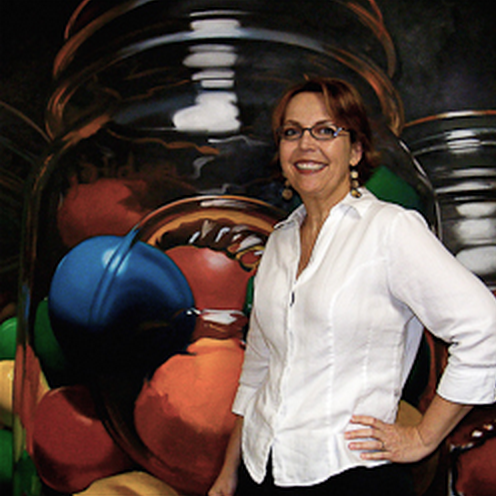 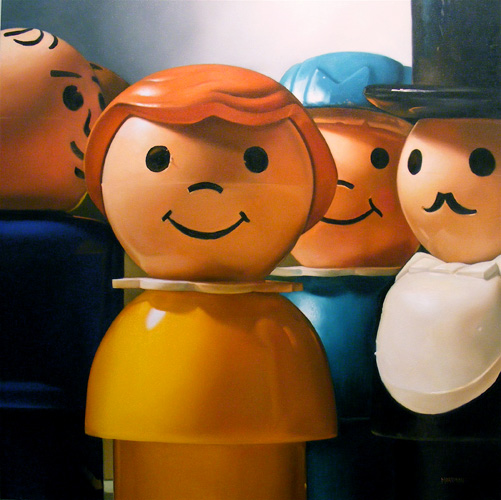 Margaret Morrison created a series of oil paintings called Child’s Play that vividly animates all of those toys up in my mother’s attic. Morrison lives and paints in Athens, Georgia. She is an Associate Professor of drawing and painting at the Lamar Dodd School of Art at the University of Georgia. She was profiled previously for her series Larger than Life. 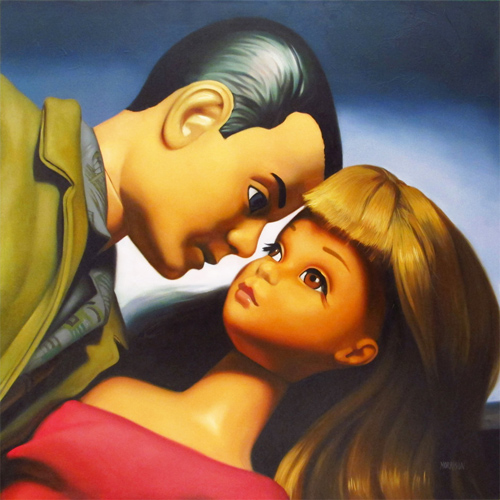 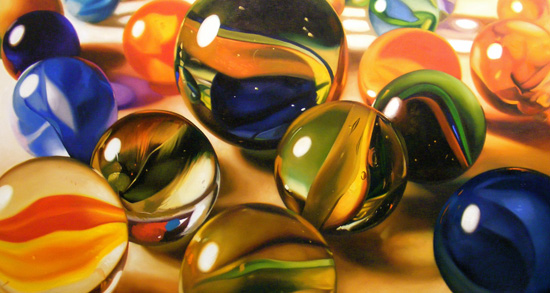 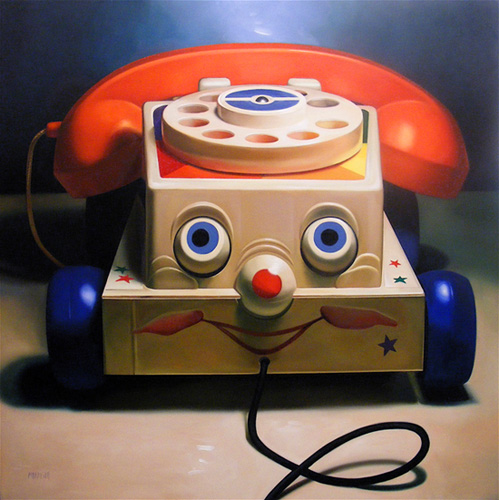 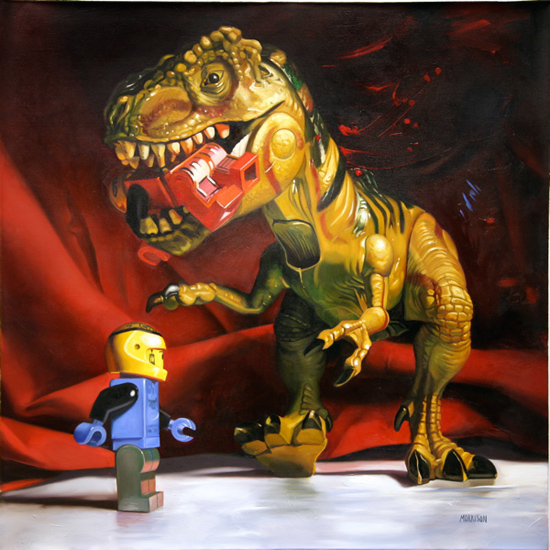 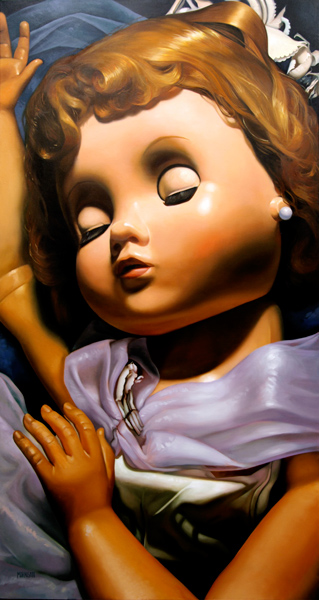 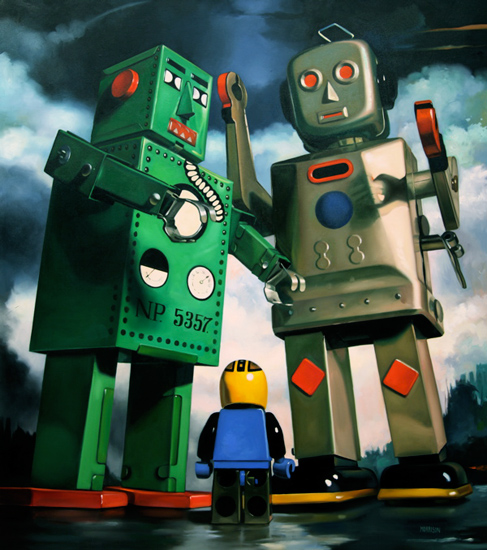 How do you approach your artwork today compared to early in your career? In many ways my approach has remained somewhat constant. I still draw on my life’s experiences, using friends and family as models. One can pretty much watch my children grow up in my paintings over the last 25 years. In addition, I’ve always been enamored by shiny, translucent, reflective objects which harken back to Dutch still-lifes which I have loved ever since I first saw them in the museums of Europe. I traveled extensively with my family when I was a little girl. I’m equally in love with a stage-like lighting. Something mysterious and magical happens when you take the simplest, most mundane object and throw a light source on it.

Over the years I have also loved working in oils; but honestly, lately I had gotten to the point where I understood the materials so well, that few surprises or “artistic accidents” found their way into my paintings. So, last year I wrote a proposal and was awarded a faculty research grant allowing me to purchase a vast assortment of acrylic paints and mediums. This definitely has started pushing me into new territory as I’ve tried to get my head wrapped around an entirely new medium…. a medium which holds untold surprises and frustrations. I’m finding that I’m thinking differently, I’m more willing to destroy and then work back into a piece, layering one transparent layer over the top of another. So far, I’ve been excited about this brand new adventure and I’ve been pleased with the results.

How do your two worlds as a Mormon and an artist fit together? Years ago when I was a graduate student and a young mother of two, one of my committee members came into my studio and said, “So, what’s it going to be, an art career or the picket fence?” My reaction was, “Hey buddy, just watch me do both! And who said I had to choose. God gave me this fire in my belly and I figured that He expected me to do something with it. I was also certain that my family was my greatest joy and that I could figure out how to balance my career and my family. Now looking back, my four children and my wonderful husband have loved the journey, being a part of my grand adventure has blessed all of our lives. Every time I have an opening, we all head up to New York City to celebrate together. One of the most wonderful perks of my faculty position at the University of Georgia is teaching for the Cortona, Italy Study Abroad program. As a matter of fact, my husband (who is a chemistry professor at UGA) and I teach a course that we designed together. Our course, PropART (Properies of Art and Restoration Techniques) covers the chemistry of art processes and conservation. 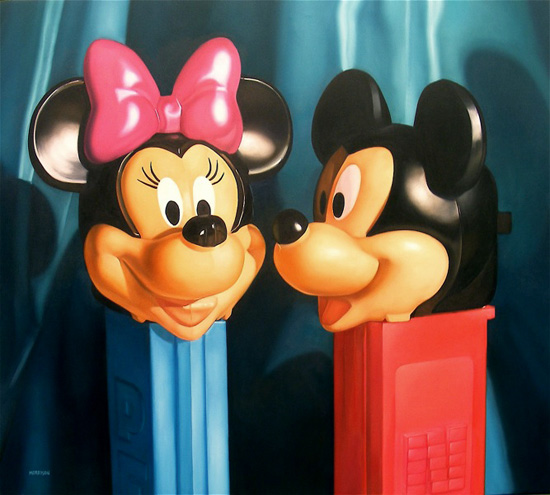 Margaret Morrison created a collection of oil paintings called Larger than Life that is composed of massive sugary images that make any of us feel five years-old. Morrison lives and paints in Athens, Georgia. She is an assistant professor of drawing and painting at the Lamar Dodd School of Art at the University of Georgia.

When did you feel you arrived as an artist? That’s an interesting question. I don’t think I’ll ever feel that I’ve “arrived.” Perhaps that’s what keeps me in my studio, searching for that elusive moment, the equilibrium between my work and my inner voice. The closest that I’ve ever come to a Cinderella moment was when John Woodward of Woodward Gallery in New York City called me out of the blue, over twenty years ago and asked me if I’d be interested in a solo exhibition at the Round About Theater gallery in Times Square. Believe me, I was pinching myself. The exhibition was received so well, that John and Kristine Woodward asked me to be in their stable and I’ve been represented by Woodward Gallery ever since.

Your series Larger than Life was so fresh and fun. How was it received in the art community? Just prior to Larger than Life I had been working on a series of gloomy, somewhat melancholy figure paintings full of portent and pathos. Right in the middle of this, I was hit sideways by a diagnosis of breast cancer. I realized that as part of my spiritual therapy, I needed to surround myself with subject matter that would positively feed my soul. I left the dark, brooding work behind and plunged full steam ahead with a brand new body of work based on my ultimate comfort foods. I quite literally surrounded myself with sweet energy. Larger than Life was exceptionally well received by the public, particularly because the economy had just bottomed out and people everywhere, were seeking healing subject matter. As a matter of fact, New Yorkers bought more candy during this economic down turn more than any other time, perhaps they were looking backward to the safety of their childhoods. I’m happy to report that I have fully recovered from cancer.

Do your two worlds as a Mormon and an artist ever not fit together? When people outside the Wasatch Front find out that I’m a Mormon, they tend to consider me as an interesting curiosity. They honestly don’t know what to make of me but that’s okay. 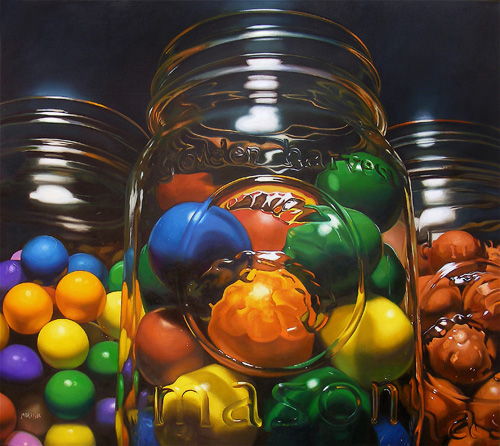 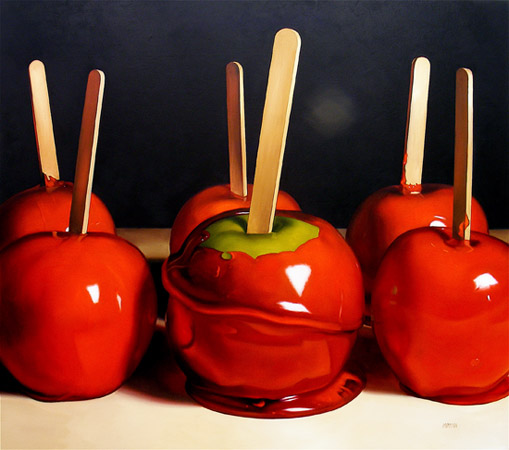 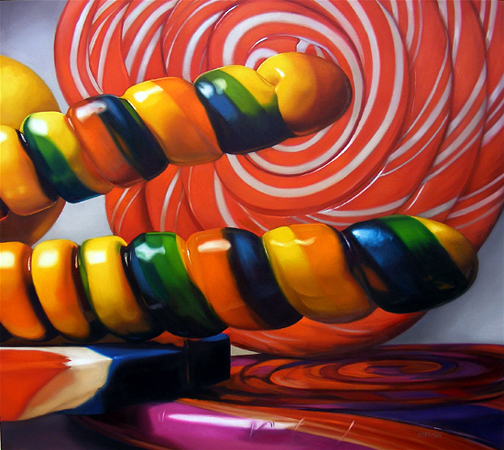 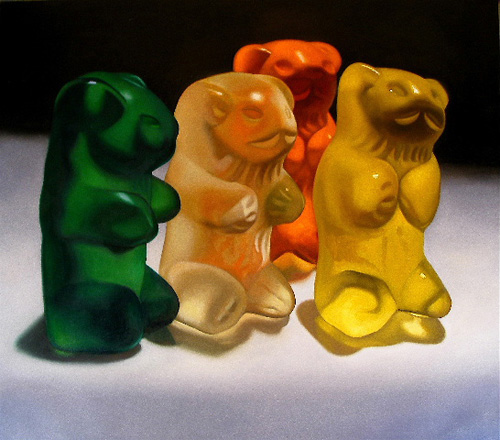 Smithsonian.com wrote about Larger than Life: “Food is nearly as ubiquitous a subject in art history as the Madonna and child. Artists seem to have been particularly fond of the simple bowl of fruit, from the Renaissance masters through Cézanne and beyond. And the still life with fruit is one of the first subjects art students tackle. It makes sense; fruit has built-in eye appeal, with interesting colors, shapes and textures. But instead of nature’s candy, Morrison satisfies our visual sweet tooth with the glossy, too-red glaze on a candy apple and the stained-glass-like transparency of gummy bears… Yet some of the paintings are almost scary. I mean, gelatinous gummy worms are kind of grotesque at normal size; magnified to several feet they are downright freakish. And a quartet of giganto gummy bears, so adorable at half an inch, seem to be marching menacingly toward us, bent on our sugary destruction.” 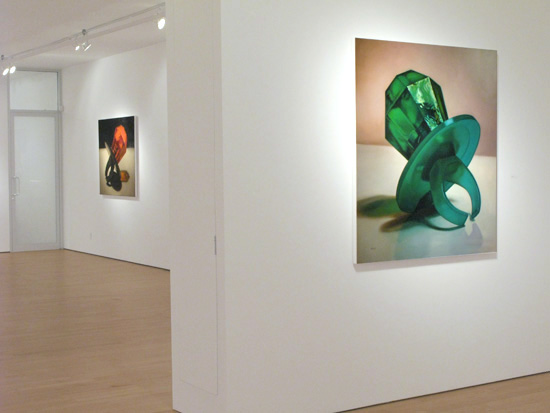