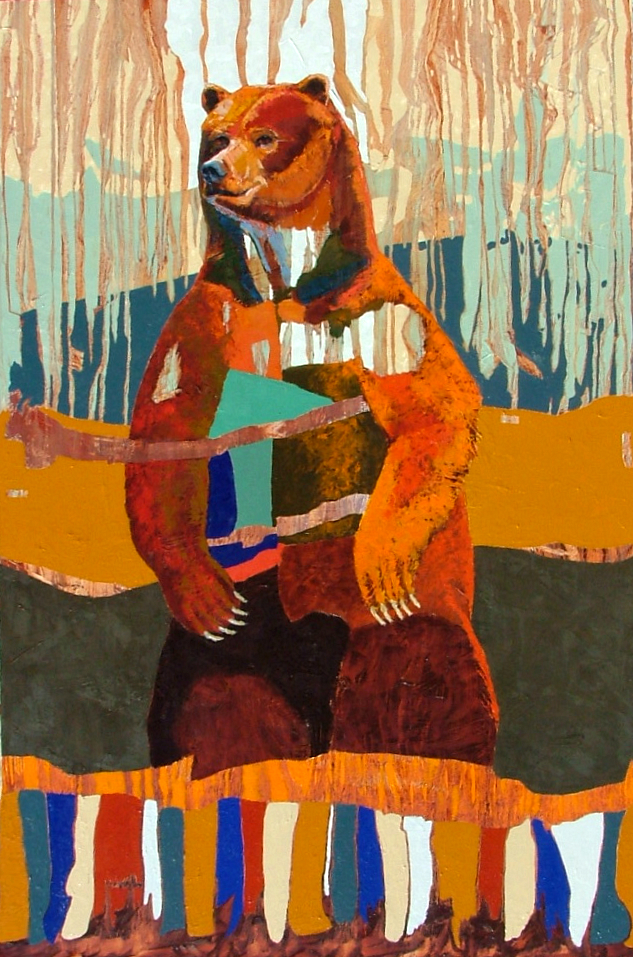 Ron Russon‘s original painting style is called a ‘modern expression of nature in art’. He attended both UVCC and the illustration program at BYU. As his bio explains, “While going to BYU, Ron was involved in a severe car accident, leaving him with a smashed car and broken neck. It slowed his progress for a bit, but he recovered and went back to school, and even accomplished an internship in New York City at Illustration House, studying under several prominent illustrators and artists. Ron became a freelance illustrator and gained several clients, but he is drawn back to his rural roots of farms and wildlife. Listening to bluegrass or space-pop, Ron paints in oil employing a loose brush and pallet knife to varied scenes, from a serene resting tractor in a windrowed field of hay to a cacophony of geometric colors creating luminescent bison. Through both abstraction and realism, his art reflects his relationship with nature and his communication with the outdoors.” He lives in Utah. 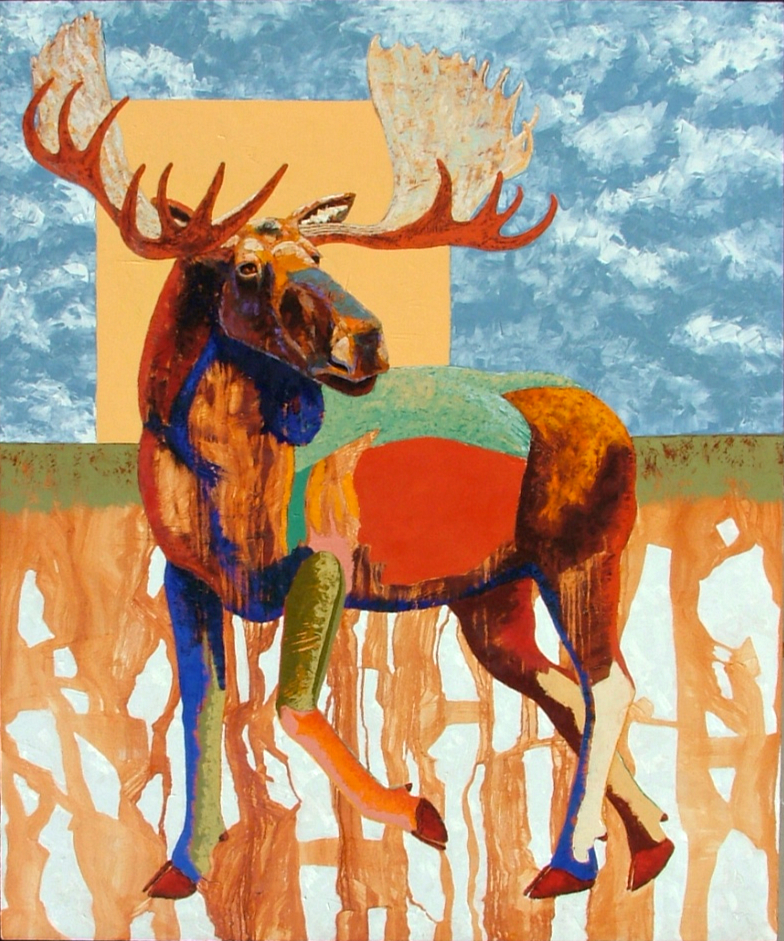 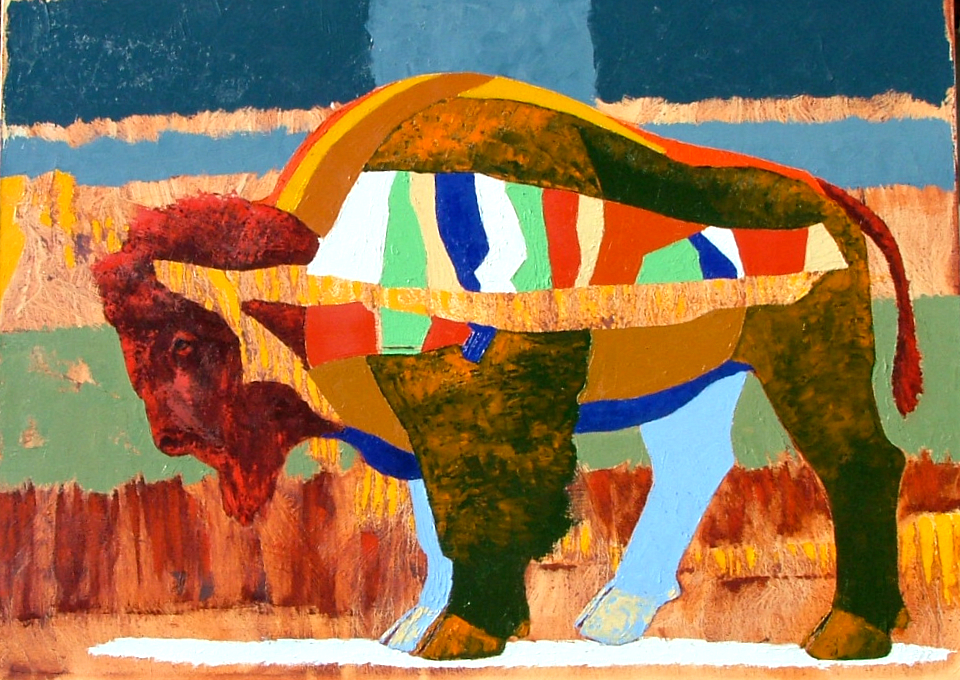 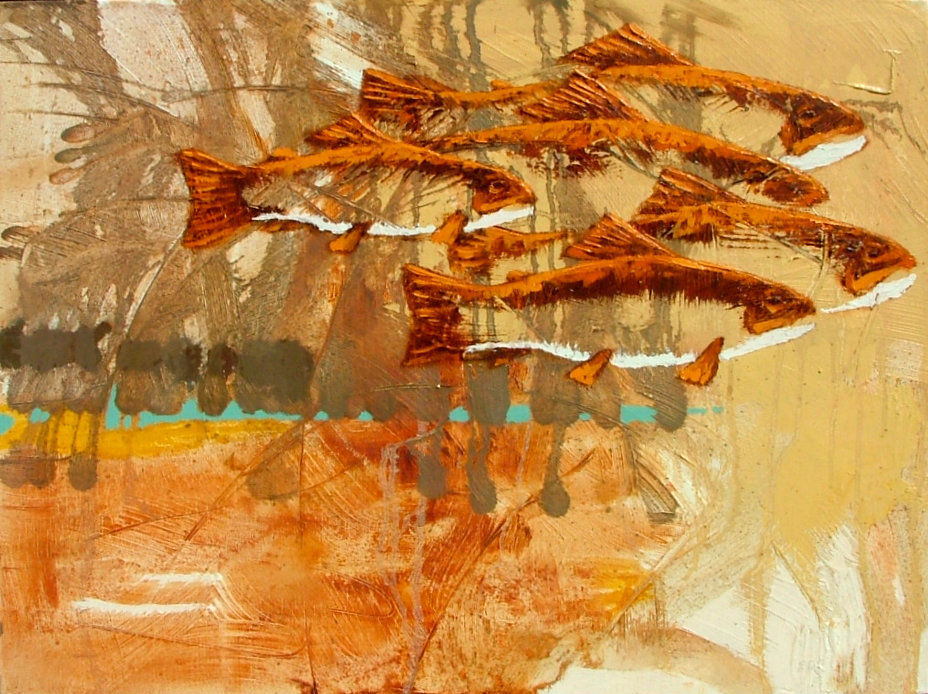 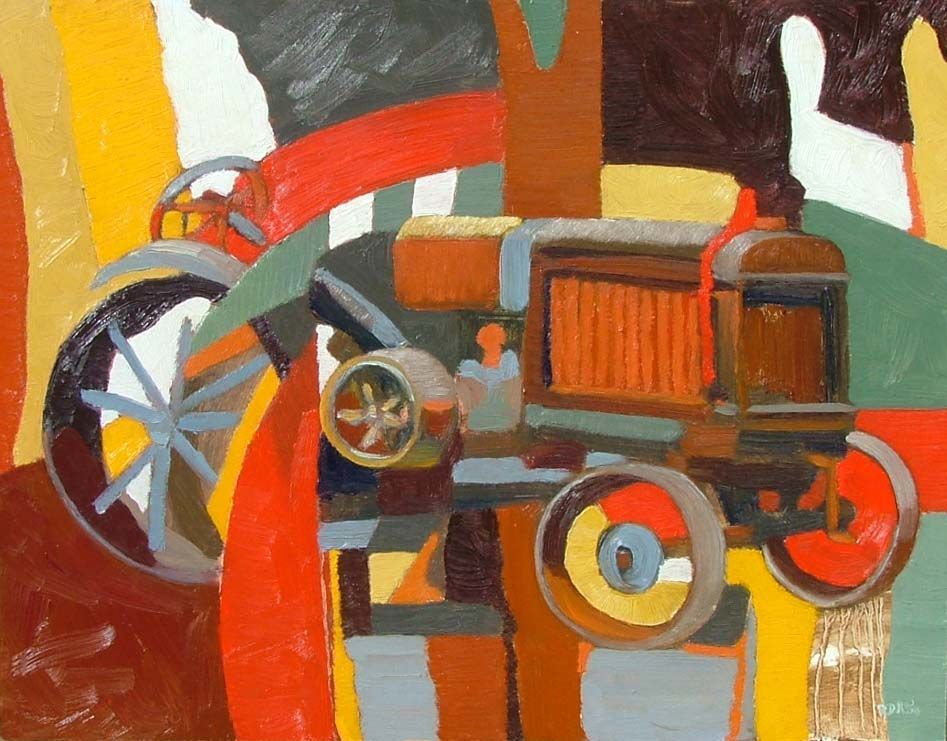 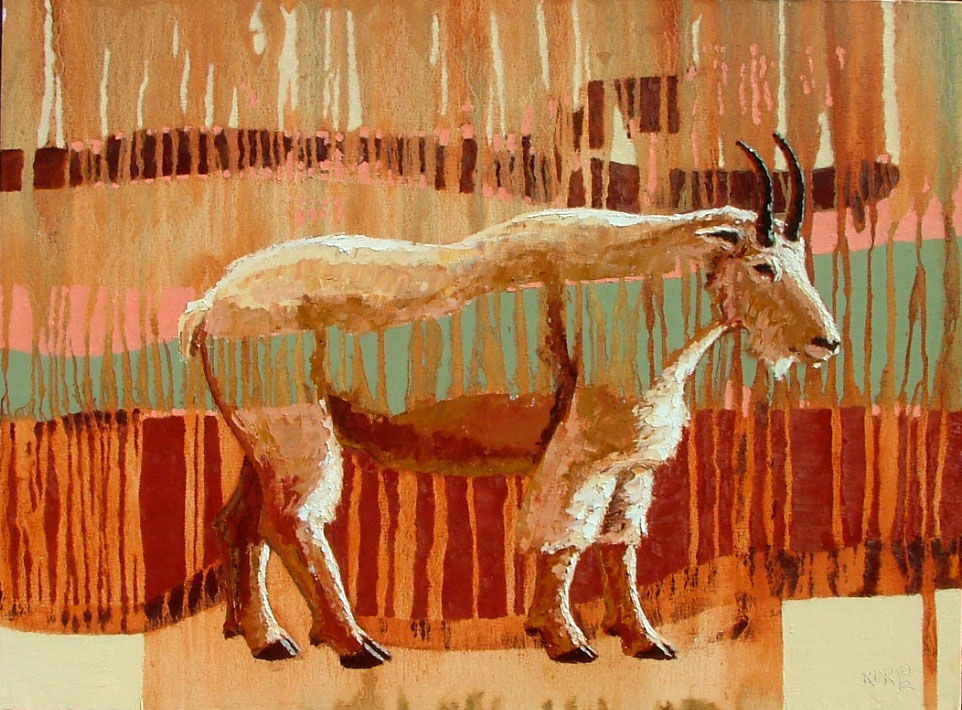 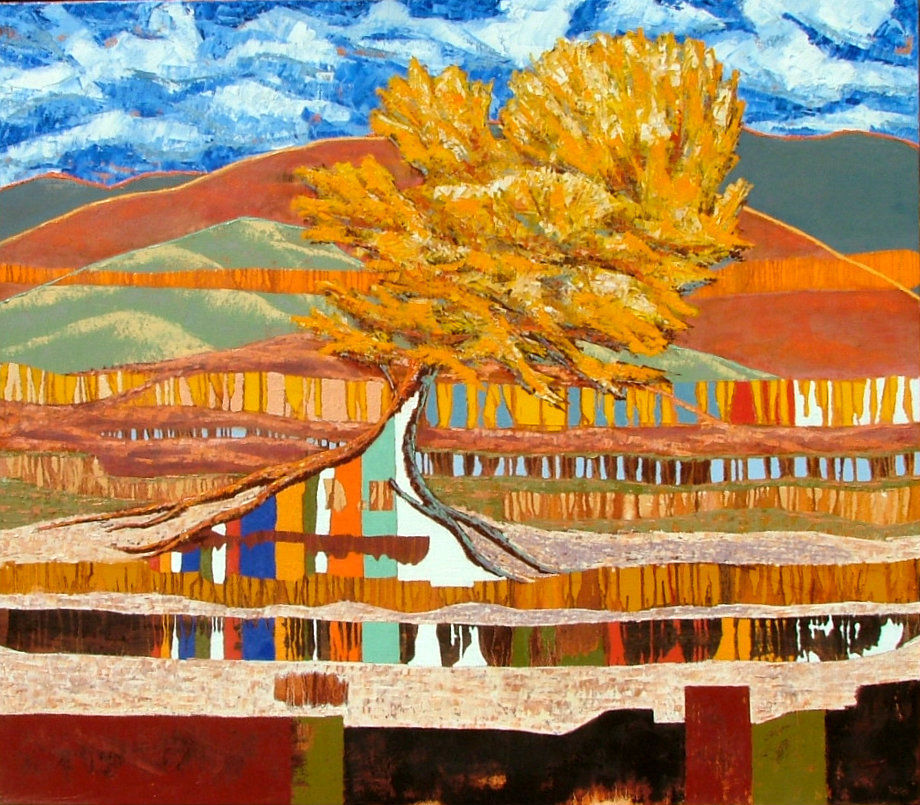 Tell us about your evolution as an artist. My evolution as an artist is ongoing I hope. I originally wanted to be rather realistic in my approach. It was satisfying to see that I could make paintings and drawings look like a photo. It was tedious and detailed stuff that ultimately felt like a parlor trick to me. I was exposed to more modern approaches to painting in my journey of education at UVU and BYU. I had often not considered modern, abstract, or non-objective styles to have much value. I remember hearing from an instructor of mine, at BYU, how we need to give other forms of art a chance before rejecting it outright. He gave the example of seeing one of Jackson Pollack’s paintings in real life and trying to perceive what he was conveying. I had that opportunity on an internship in New York. I was able to spend some time with a few Jackson Pollack paintings there. It was transformative. I saw Vincent VanGough paintings, Kandinski, de Kooning, Rothko, Norman Rockwell, all kinds of work done in all kinds of fashion. That in a way gave me permission to pursue something beyond traditional realism and I could step out beyond the crutch of pure representational work. I was free from making a painting look like a photo. I now really try to pursue a more expressive style hopefully provocative or evocative but not offensive. I want people to be moved by my work by the texture or the color or perhaps deeper meaning through symbolism and metaphor. I’m working to make my art require someone to spend time with it, to allow themselves to think and become part of the artwork. The work hopefully goes beyond mere decoration and has impact for a lasting positive change.

You once said, ‘Sometimes an artist needs a kick in the butt.’ A great local Utah writer named Ehren Clark interviewed me and he is the one who coined that phrase of “needing a kick in the butt”. I was pursuing a career in illustration after graduating from BYU. I graduated in Illustration Design and I immediately got work upon graduation. It was a fruitful time for illustrators. That was not to last however. Many of my jobs lost budget as more jobs used photos and scanned work instead of commissioned work. Stock illustration became the next wave. It was a time for me to try to become an artist instead of an illustrator. I didn’t have much to lose and I had always wanted to be a fine art painter. So the impetus, or “Kick in the Butt” was the lack of illustration jobs that I used to have. It was a motivation to allow me a leap of faith towards my take on art. I took the chance to try what I wanted to do and be self driven and pursue my own work and style. I had always felt that I was given an art interest and even perhaps a mod comb of talent for a purpose or reason. My intent in my work is to provide expression, conversation, interest, reflection, introspection, and thought. If I can do that then my purpose or reason comes to fruition.

You work is very organic and colorful. How do you keep your art fresh? I am glad you find my work organic and colorful. I hope that is just an extension of me. I think that if there is any freshness it is due to my spiritual center. I find that I need to keep myself steeped in spirituality to have good work come out. I feel that my work is an extension of my soul and spirit. I find that if I am doing the right stuff like reading scripture, pondering, praying, participating in church, listening to the prophet and apostles my work is much more interesting and fresh. Being a good Mormon boy seems to help keep the flow of inspiration in my work. I don’t plan out my paintings much. I generally let them happen like a dance or an improvisational jazz piece. I find that is where I am in constant need and desire of inspiration and that place is a place where my artwork comes from. I am glad you find it fresh. I think that lets me know I’m heading in the right direction. 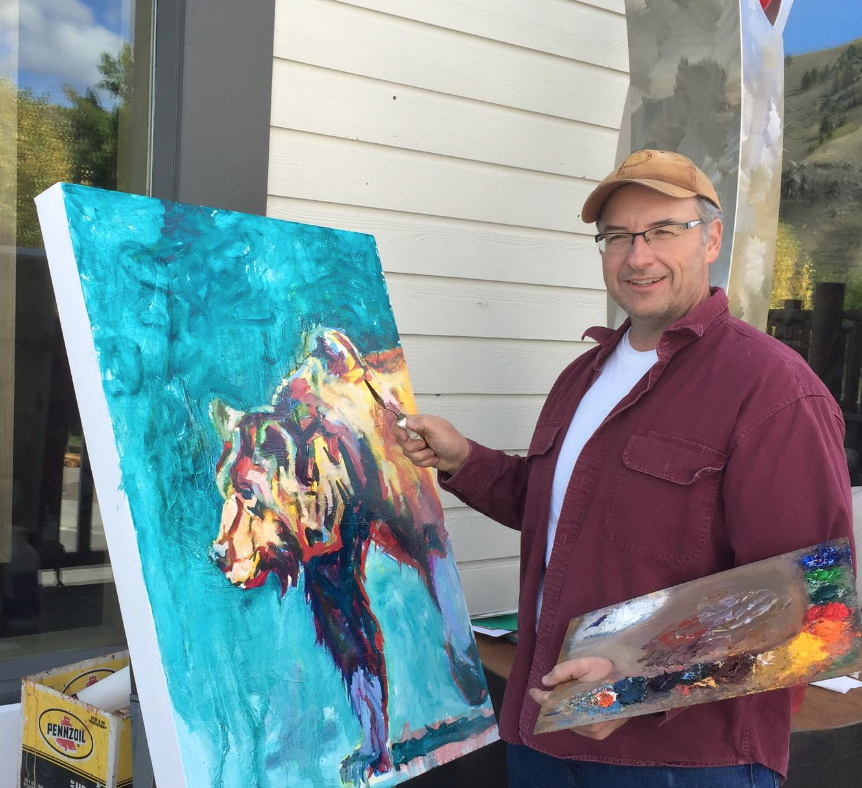